On a day in late July when the Tokyo Olympics should have begun, dozens of artists and spectators crowded around a small gallery showcasing photographs of disaster-struck Fukushima, a painting of a face mask and abstract art pieces hanging on the walls.

The one-week exhibition was being held by a group of 20 artists in a gallery near the new National Stadium in Tokyo, the games' main venue, to express concern about the world's biggest sporting event, now due to be held next year, amid the novel coronavirus pandemic.

With the pandemic already raging for months and with no end yet in sight, Kai Koyama, organizer of the event, said many people now think it will be "impossible" to hold the Tokyo Games even under the delayed schedule.

Koyama came up with the idea of hosting an exhibition at Toki Art Space, which he says is the closest gallery to the stadium, to pose questions to the public about holding the Olympics. The group of artists exhibiting came together as he reached out to others he knew in the art world who shared his concerns. 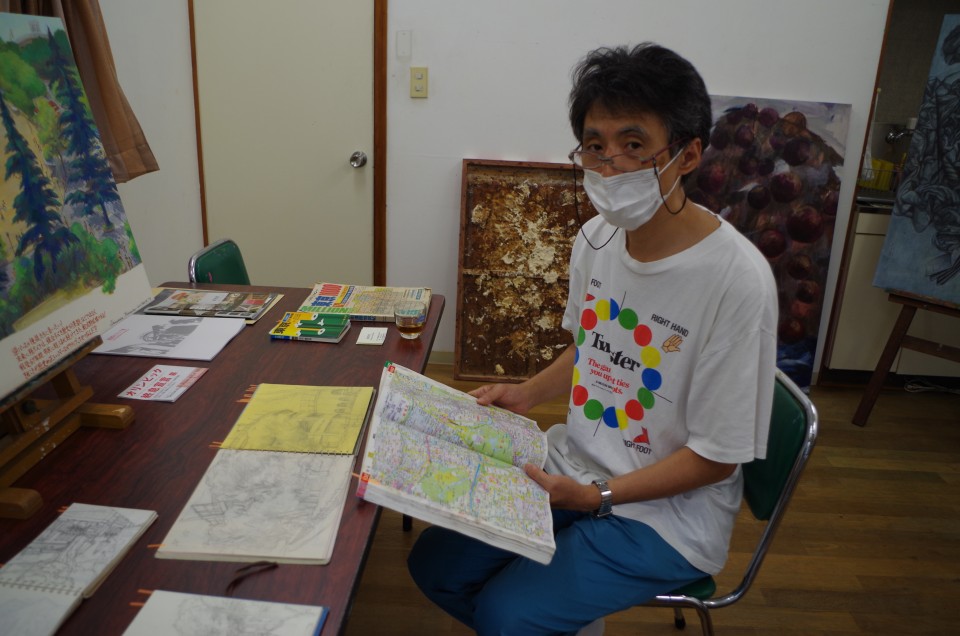 Artist Munemitsu Shimamura shows an old map of Tokyo and his sketches of landscapes that disappeared following the redevelopment around the Tokyo Olympics' venue in an interview in Yokohama on July 31, 2020. (Kyodo)

Their reasons to oppose the games, now scheduled for July 23-Aug. 8, 2021, are various and go beyond the situation surrounding the virus.

For Munemitsu Shimamura, born and raised in the capital's Shibuya Ward, which borders the stadium, what inspired his pieces was dismay at the impact of Olympic construction on the local environment and what he saw as the tearing up of the legacy of the last Olympics that Tokyo held, in 1964 -- Japan's only previous hosting of the summer games.

"I started drawing sketches around here after the construction plan for the new stadium first came to light," said the 54-year-old as he showed dozens of pages from his sketchbooks. 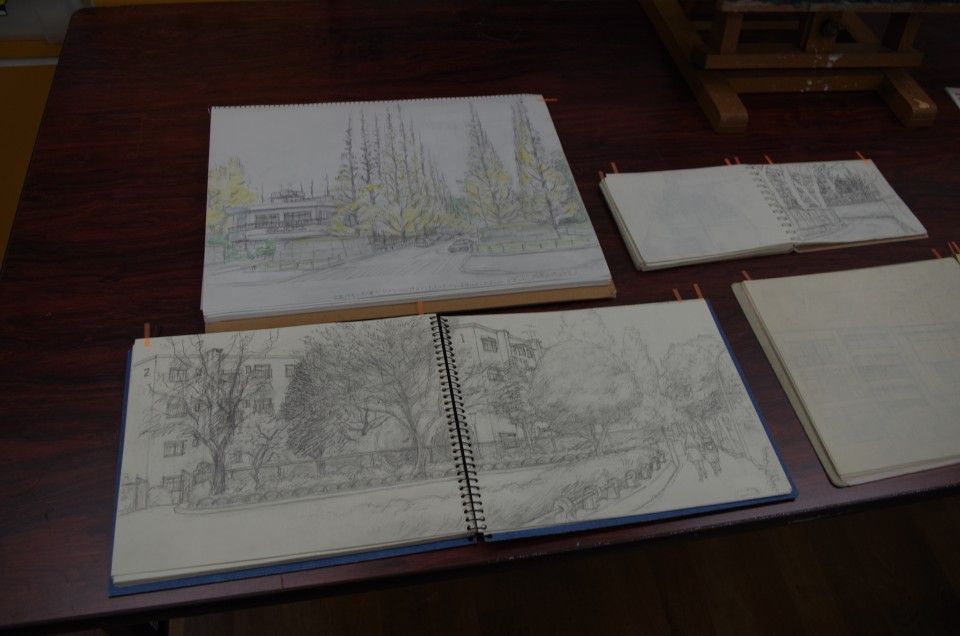 He has been drawing disappearing landscapes from different angles following the Meiji Jingu Gaien area's redevelopment, including apartment blocks, streets and markets.

For the exhibition, Shimamura painted baseball fields in a park neighboring the stadium where members of the public used to play before some of the fields were turned into an auxiliary track for the quadrennial international event.

He said drawing was like "playing tag," as construction progressed at a breakneck pace for the Tokyo Games opening, which spurred him to complete it quickly in his spare time.

Many households were evicted from buildings earmarked to make way for the Olympic development, and a number of homeless people who had sought refuge in nearby Meiji Park were expelled as part of redevelopment around the areas, according to the group.

One of the apartment blocks, Gaien House, which was initially built as a dorm for foreign reporters during the 1964 Olympics, was torn down. Shimamura had lived there until 1978 while in elementary school.

"I noticed through drawing that a lot of things changed from what I remember in childhood," said Shimamura, comparing an old map of Tokyo with versions from his sketchbooks. 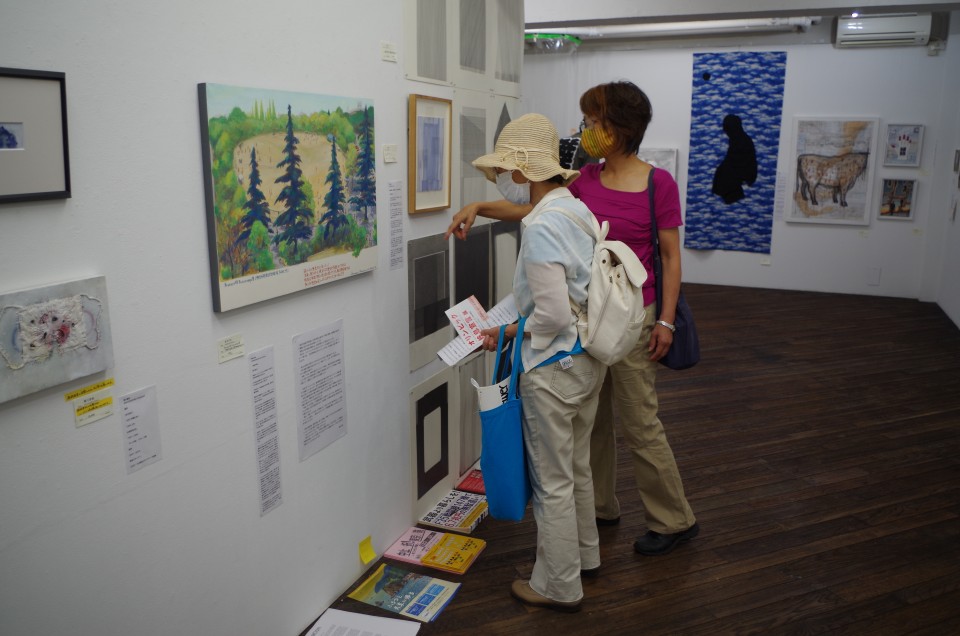 Women look at a painting by Munemitsu Shimamura in an exhibition held by an anti-Olympics artists group in Tokyo on July 24, 2020. (Kyodo)

Overall, the redevelopment, which also included the pulling down of a stadium, amounted to "destruction of the legacy of the last Olympics," he said, calling the 1964 games a "symbol of recovery from World War II" and of Japan's postwar embrace of democracy.

Among the other artists, some argue that the central government continues to ignore the plight of people in the northeastern prefecture of Fukushima hit by the 2011 earthquake-tsunami and nuclear disasters, while others highlight the influx of taxpayers' money into a one-off event.

Koyama said the exhibition has garnered more media attention than organizers expected and been well attended by the public. "I am sure that not only us, but more and more people also doubt we can hold the Tokyo Olympics now."

Over 80 percent of volunteers of the Tokyo Olympics who responded to a survey are worried about whether the virus can be contained, according to the center supporting volunteers.

In July, a Kyodo News survey showed that about 70 percent of respondents to the nationwide opinion poll think the Summer Games should be either postponed again or canceled.

"The government should give top priority to fighting COVID-19 and preventing the loss of human life," Koyama said. "We will continue calling for an end to the Olympics."