Olympics: Japan delegation not to attend torch handover in Greece

Japan will refrain from sending a delegation to the Olympic flame handover ceremony in Greece as a safety measure in response to the global coronavirus pandemic, Tokyo Games organizing committee President Yoshiro Mori said Tuesday.

A delegation including Mori and Japan's Olympic minister Seiko Hashimoto had been scheduled to attend the ceremony Thursday in Athens, but it will instead greet the Olympic flame's arrival in Tokyo.

The local organizers earlier in the day said the Japan leg of the Olympic torch relay will be scaled down to prevent the spread of the new coronavirus, with ceremonies marking the start and end of each day initially to be held without spectators.

While the ceremonies will continue throughout the 121-day nationwide relay, they will take place behind closed doors in Fukushima, Tochigi and Gunma prefectures, through which the torch will initially travel on the Japan leg starting March 26, Tokyo Games organizing committee CEO Toshiro Muto said.

Organizers have asked spectators not to gather along the roadside in large groups, while those with symptoms of illness are requested to stay away. Runners with temperatures above 37.5 C are also asked to refrain from taking part in the relay. 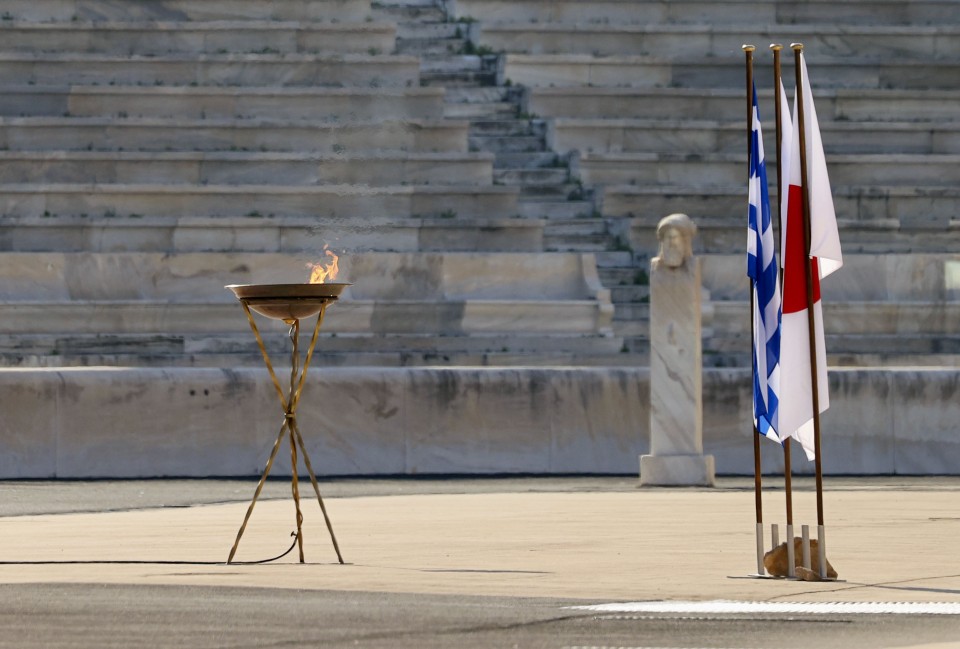 (The Olympic flame is lit on a platform set up at Panathenaic Stadium in central Athens on March 14, 2020.)

The start of the Japan leg -- with members of the 2011 Women's World Cup-winning Nadeshiko Japan team carrying the torch from the J-Village soccer training center in Fukushima Prefecture -- will also take place without spectators.

It is planned that the Olympic flame, expected to arrive in Japan on Friday, will be put on public display in areas hit hard by the March 2011 earthquake and tsunami.

J-Village was selected as the starting point for the domestic relay for its role as an emergency response headquarters during the subsequent nuclear disaster in 2011.

After traveling throughout Fukushima Prefecture for three days, the relay will continue in Tochigi and Gunma prefectures for two days each.

The flame will then travel across all of Japan's 47 prefectures, but organizers said the specifics of the relay will be determined based on the scale of coronavirus infection in each region.