Japan's National Stadium was officially completed Saturday, when the centerpiece of next summer's Tokyo Olympics and Paralympics was handed over to its owner and operator, Japan Sport Council.

The stadium with five stories above ground level and two floors below, is the latest incarnation of Japanese sports' spiritual home to be built in the neighborhood. It replaces the previous National Stadium used as the main venue of the 1964 Tokyo Olympics, which had taken the place of Meiji Jingu Gaien Stadium. This latter venue had been a point of departure for students leaving for World War II battlefronts.

JSC is proud that the stadium meets "the world's highest 'universal design' standards." Careful attention paid to the accessibility guideline published by Olympics and Paralympics organizers has created a quality environment for spectators, regardless of age or disability. 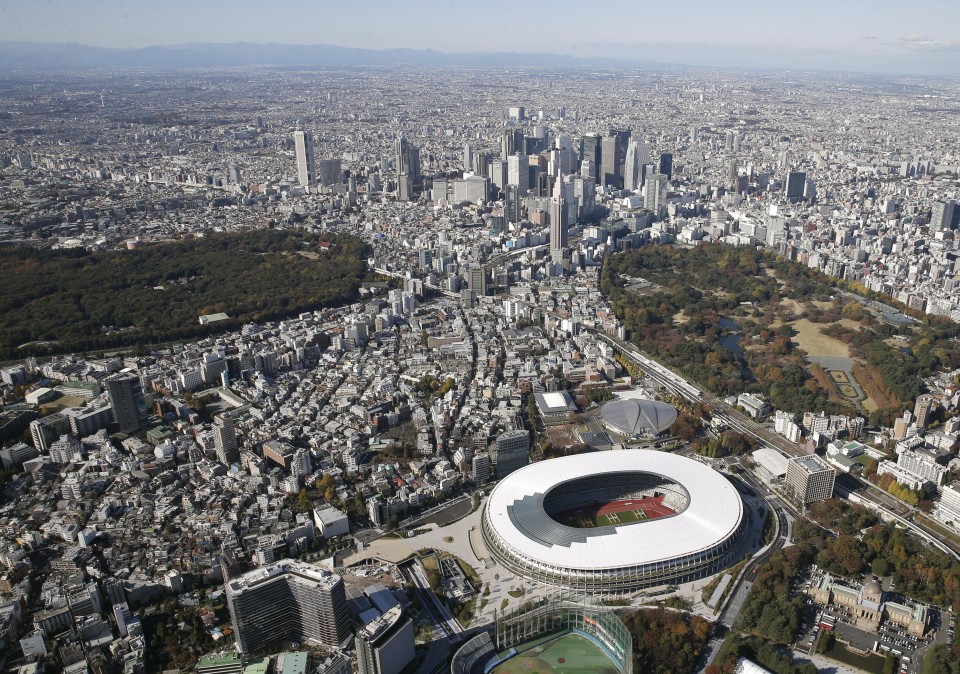 "We're getting good reviews (from persons with disabilities) for our careful manner of dealing with details," a JSC representative said of a meticulous communication process.

As a result of more than 20 hearings with disability organizations, toilet seat heights were adjusted upward by 1 centimeter, while Braille signs in elevators were posted 2 millimeters higher.

The stadium's first floor is on ground level, facilitating smooth access to wheelchair users and those with mobility issues. The height of the 500 seats for wheelchair users has been set so even standing spectators in front of them will not obstruct their view.

"I can have a grandstand view of the competition, and also felt I can quickly get out in the event of an earthquake," said Yasuhiko Funago, an upper house lawmaker who suffers from amyotrophic lateral sclerosis.

A large number of WiFi hot spots have been installed, allowing some 30,000 users simultaneous connections in order to cope with the anticipated high demand due to mass access to social media sites for text and video.

The 850-meter fifth-floor concourse that encircles the stadium will be open to the public after the games when no events are being held. From there, visitors can enjoy seasonal vistas such as the spring's cherry blossoms and the brilliant colors of changing autumn leaves as well as the Shinjuku skyline, Tokyo Sky Tree and Mt. Fuji.

The completion marks the end of a project first conceived in 2011 -- two years before Tokyo was named the 2020 Games host -- born out of a desire to revamp the old National Stadium to hold 80,000 seats for Rugby World Cup 2019.

Plans for this stadium were approved after a public outcry over the costs of the stadium design originally earmarked to host both the World Cup and the 2020 Olympics and Paralympics.

As cost estimates for that design by the late British architect Zaha Hadid kept going through the roof -- soaring to 252 billion yen -- the original plan was scrapped by Prime Minister Shinzo Abe in July 2015.

The Zaha design, featuring two gigantic arches over the stadium, had played a role in Tokyo winning the 2020 Olympics. But initial proposals had estimated costs at 130 billion yen before they snowballed.

The subsequent design competition, with estimates capped at 155 billion yen, was won by the joint venture of the three entities in December 2015, with construction beginning some 14 months later than originally scheduled. The delay meant the stadium was unable to play a role in this year's Rugby World Cup.

After undergoing post-Olympic renovations, the stadium is scheduled to start commercial operation in the latter half of 2022, available for sporting and cultural events.

The government in 2017 announced a plan to remove the running tracks in order to make it a ball-sports stadium that could be run by the private sector, but no concrete plans are in place.