Heroics from winner Tomoa Narasaki in the men's combined event at the sport climbing world championships on Wednesday attested to Japan's chance of claiming at least one gold medal in the sport at the Tokyo Olympics next summer, and improvement on the speed wall proved crucial.

The 23-year-old handed himself a huge boost for the rest of the day as two flawless head-to-head races in the speed, the first of three disciplines, guaranteed him at least second-place in the opening discipline.

It was a marked difference from last year when he failed to recover from his early-round mistakes in the first discipline, eventually missing out on the high-profile Asian Games and world championship titles.

Seen as the Achilles heel for the Olympics hosts, traditionally strong on the other two disciplines, bouldering and lead, the national association last year began sending Japanese climbers to the speed World Cup circuit in full swing to hone skills on the 15-meter-high wall. 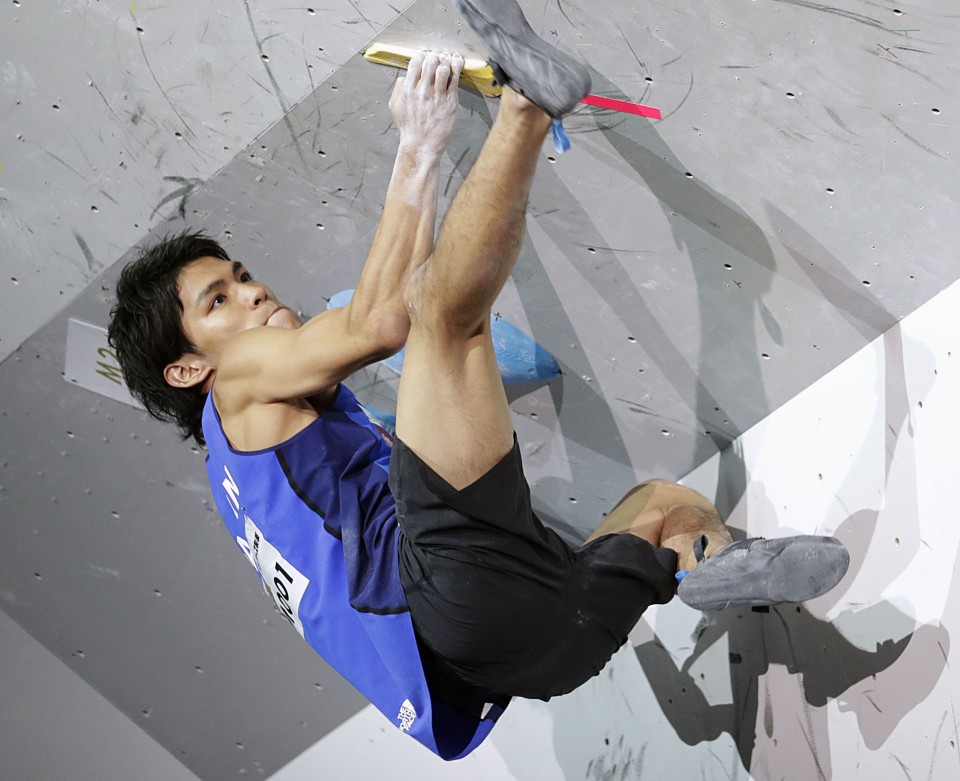 The Speed Japan Cup has also been set up this year not just to offer the opportunity to check their times but to provide more tournament experience, in which they have to beat the climbers next to them to advance in the latter stages just as at the worlds and the Olympics.

"I've gotten stronger as an athlete, speed is a man-to-man battle that has different stress from the boulders," said Narasaki, who won both the bouldering World Cup overall title and the world championship this year and in 2016.

"And simply I got physically stronger as well thanks to the speed."

A lack of training facilities has been a bottleneck for the discipline but the number of speed walls is on the rise across the country.

Leading female climbers, Akiyo Noguchi who won the combined silver to secure her Olympic berth, and speed record holder Miho Nonaka even have ones near their homes -- built thanks to local support and crowd-funding -- in a massive change of Japan's climbing landscape. 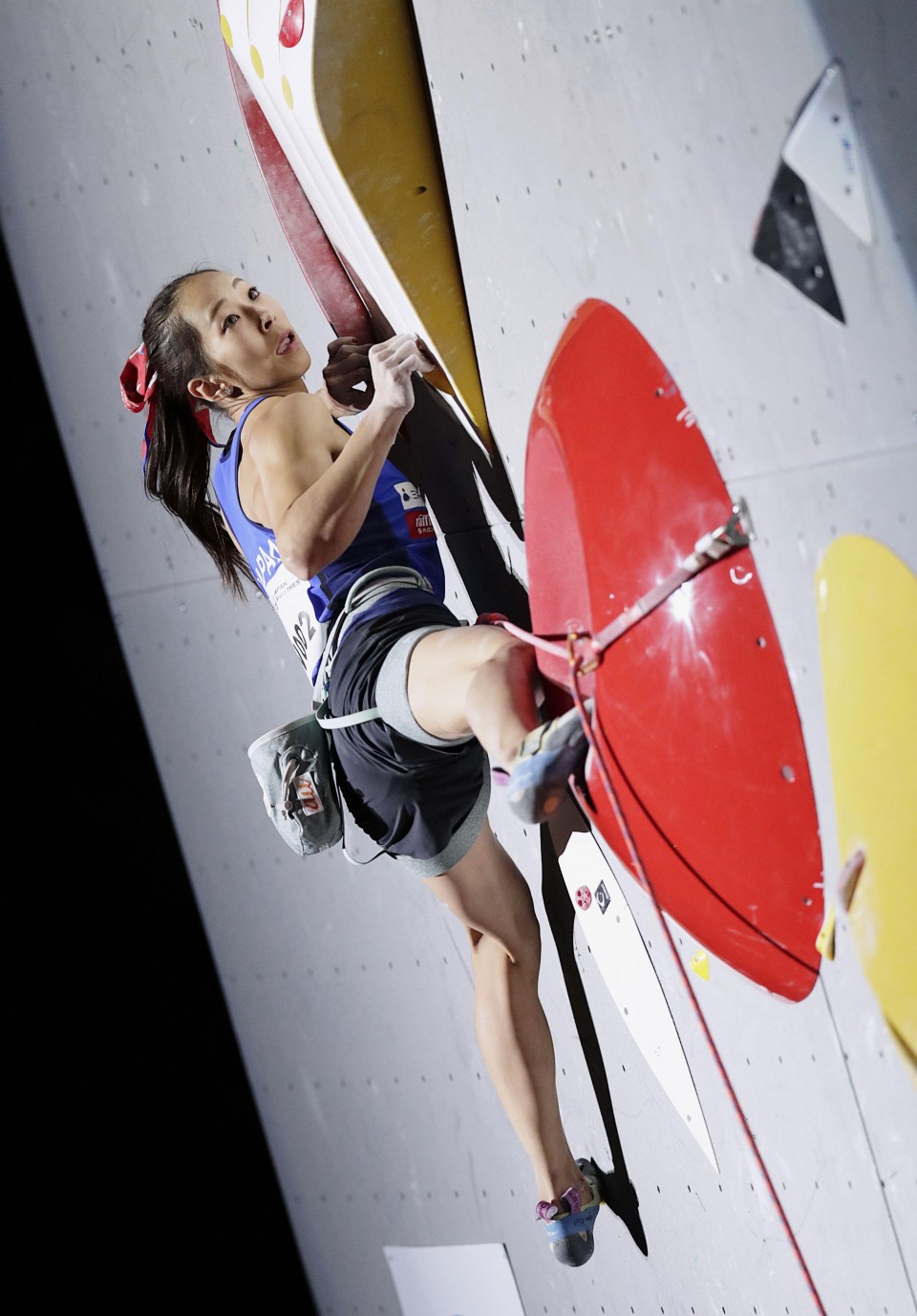 Narasaki continues to set the bar high for his male compatriots after breaking his Japan record with 6.159 seconds in his second race in the final, shaving 0.671 seconds in a year after posting 6.830 last August to place himself among the fastest combined climbers.

"They've got faster dramatically," said Japan national team head coach Hiroshi Yasui. "Almost all the ones who made the combined finals set their personal records and I feel there's still room left for them to improve."

With the combined final standings determined by multiplying positions from three disciplines and the lowest winning the gold medal, sitting just a place above their rivals in one discipline can prove decisive.

Noguchi, who will likely have to go neck to neck with formidable Janja Garnbret for the top step of the podium, could benefit by finishing even one place above the Slovene in the speed since the pair are hard to separate in the bouldering and lead.

On Tuesday she came atop the bouldering chart ahead of Garnbret, who had swept the bouldering World Cup circuit and won the world championship this season, and pulled within inches of the combined title before slipping when she leaped for the final hold on the lead wall.

Kazakhstan's Rishat Khaibullin placed third on 40 points after coming first in the speed, eighth in the bouldering and fifth in the lead. Aleksandra Miroslaw of Poland ranked fourth on 64 points in the women's bracket after winning the speed despite finishing bottom in both the bouldering and lead. 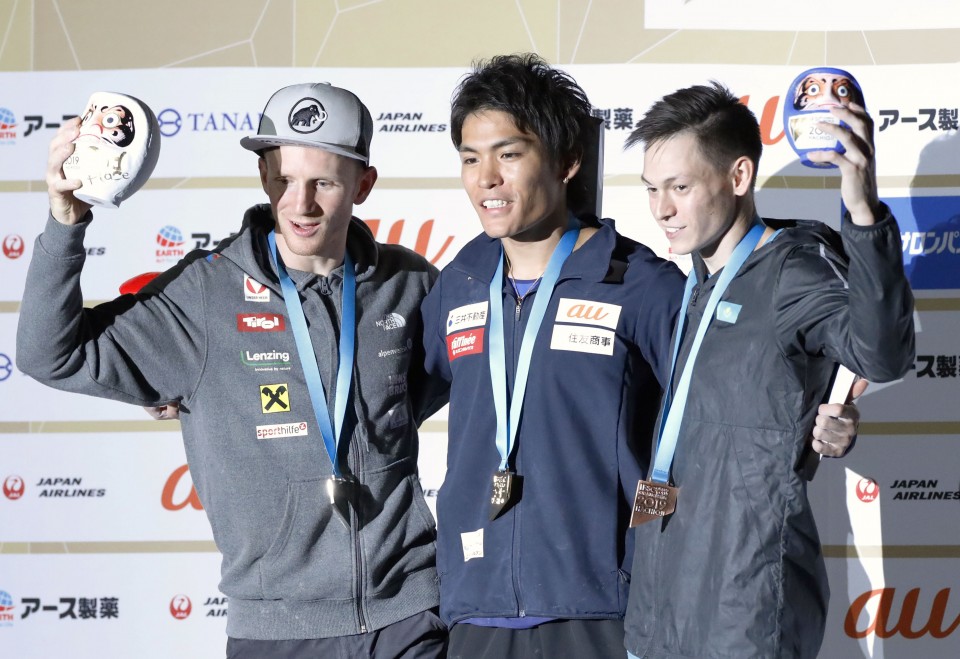 ((from L) Jakob Schubert of Austria, Tomoa Narasaki of Japan and Rishat Khaibullin of Kazakhstan.)

Early-round mistakes in the speed proved costly for Kokoro Fujii in the men's combined and Futaba Ito in the women's. Both excel on the boulders, but neither could recover, eventually finishing sixth and seventh, respectively.

"We have to improve the disciplines that they're already good at. Getting the first place, and where (in the three disciplines) we get them, is important," Yasui said. "The game starts as soon as we know who the 20 climbers (in the Olympic tournament) are. We have to choose where to strengthen each of our climbers."

Whoever takes Japan's remaining Olympic ticket in each gender, they, along with Narasaki and Noguchi, will hope they have as little catch-up as possible -- and preferably a place near the top -- before the bouldering and lead, where they may be able to fend off rivals.

"There'll at least be one climber strong in the speed and, even if I practice for a year from now it'll be tough to reach the level where I can beat him," Narasaki said, eager to further brush up his strength. "I want to cut back on the number of problems I can't climb for the bouldering and make no mistakes in the lead."