Alpine sit-skier Momoka Muraoka missed out on winning her fifth medal of the Beijing Paralympics on Saturday when she finished fifth in the women's slalom.

The 25-year-old Japanese was attempting to win five medals at consecutive Paralympic Games, but was unable to add to her haul of three gold and one silver won at the Yanqing National Alpine Skiing Centre in Beijing's mountainous north.

Muraoka could not replicate her dominant showings from the speed events in the tight and technical turns of the slalom, which she acknowledged before the event is her least preferred discipline. 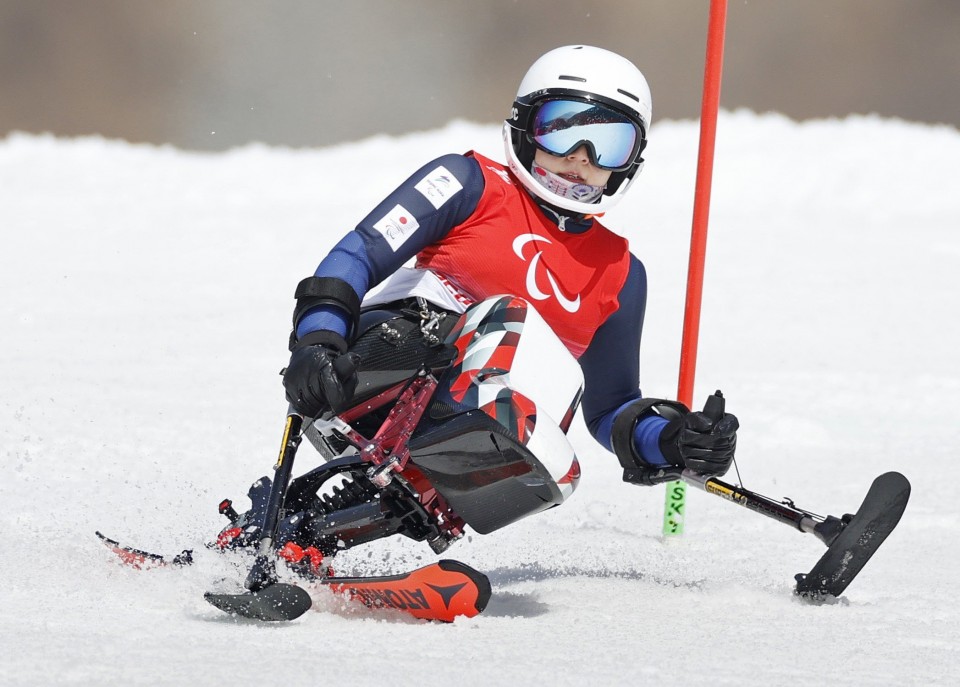 Momoka Muraoka of Japan competes in the women's sitting slalom at the Beijing Winter Paralympics on March 12, 2022, at the National Alpine Skiing Centre in the Yanqing competition zone. (Kyodo)

But she appeared not too disappointed with the result, saying she felt she "did well" considering every other ranked competitor had a higher sit-skiing classification than hers.

"I felt I was able to ski in my own way. In that sense, I don't have any regrets and feel accomplished," she said, adding the sharper turns required in the slalom are more difficult for those with more acute impairments.

In para Alpine skiing, competitors are allocated different sporting classes depending on their sitting balance, which is very important for weight shifting and maneuvering during races. The higher the number, the higher degree of ability the person retains.

Muraoka, who was diagnosed at age 4 with an inflammation of the spinal cord, was the only LW10 competitor to complete Saturday's event. The eight other ranked racers were classified in the LW12 class.

Muraoka completed her first run in the fifth-fastest time of 53.44 seconds and improved in her second to complete the course in 52.10, but her 1-minute, 45.54-second total time was not good enough to put her into medal contention.

Anna-Lena Forster of Germany defended her slalom title with a two-run time of 1:37.86 to finish ahead of Chinese pair Zhang Wenjing and Liu Sitong.

It was Forster's second gold and fourth medal overall in Beijing, taking her career total to nine won across three games.

Muraoka was happy that her long-time rival Forster was able to take first place. 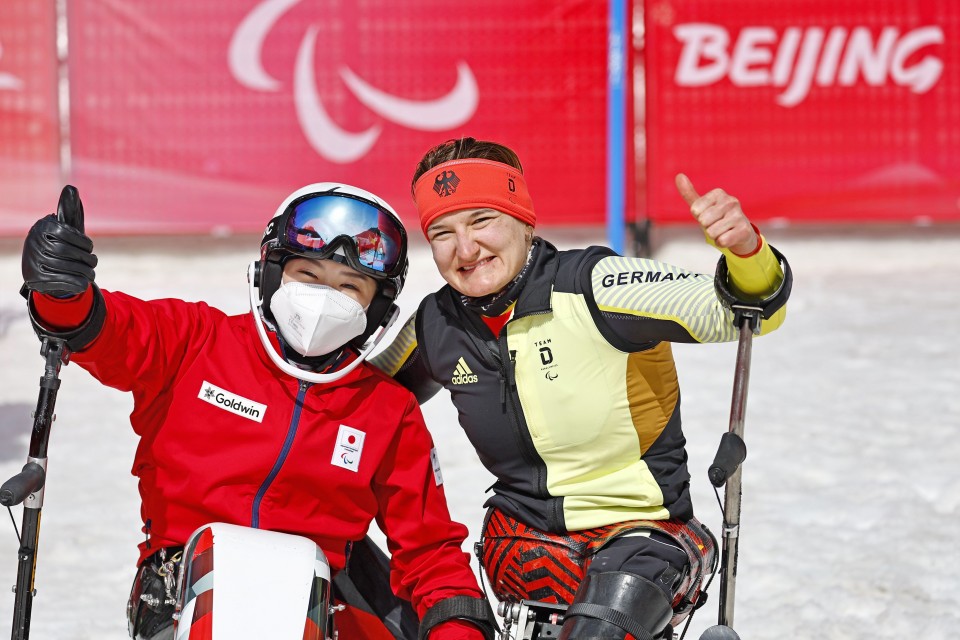 Japan's Momoka Muraoka (L) and Anna-Lena Forster of Germany are pictured after the women's sitting slalom competition at the Beijing Winter Paralympics on March 12, 2022, at the National Alpine Skiing Centre in the Yanqing competition zone. Forster won the gold medal while Muraoka had to settle for fifth place. (Kyodo)

"The fact that she was able to perfectly win the slalom, her strongest event, demonstrates her strength, and I can really respect that. I think she is someone I can learn from," Muraoka said.

For her part, Forster said the win made up for the previous day's disappointment when she finished fourth in Muraoka's pet event, the giant slalom.

"I'm very happy," she said. "Overall, the Beijing Games have been great."

Regarding the next Paralympics to be held in Italy, Forster said she was looking forward to competing closer to home, but "four years is a long time and we'll just have to wait and see."

Zhang, who swapped positions with Liu from Friday's giant slalom, also expressed satisfaction with her silver as she spoke with local reporters in the mixed zone.

"I think we are all amazing and have worked really hard. We have gotten the best results," she said, referring to her fellow Chinese who have also reached the podium at the Beijing Games.

Four years ago in Pyeongchang, China claimed its first Winter Paralympic medal when it won gold in wheelchair curling, but now it is leading the medal count in Beijing with 58 medals, including 18 gold.

"I think we are especially worthy of making our families and team proud," Zhang said.

While Muraoka was unable to replicate the five medals she won at the Pyeongchang Games in 2018, she did make history by becoming the first Japanese Winter Paralympian to win four career gold medals while equaling the Japan record for the most golds won at a single games.

Reflecting on her journey, Muraoka said that while her medal tally was one less than at Pyeongchang, her results have improved.

"I was able to experience a lot of growth in the four years between Pyeongchang and Beijing, not just in terms of competing but also in other areas," the Japanese Paralympic team captain said. "I felt I grew a lot even during the 10 days of the Beijing Paralympics."