If you ask Yasuhiro Jimbo about wheelchair basketball, he'll say it changed his life forever.

Over three decades, the sport turned a despairing 18-year-old into a four-time Paralympian motivated to push himself beyond limits that he would never have previously imagined.

While he no longer plays, Jimbo, now 49, is up for another challenge at this summer's Paralympics: he wants to help athletes unleash their "inner beast" using the wheelchairs he develops. 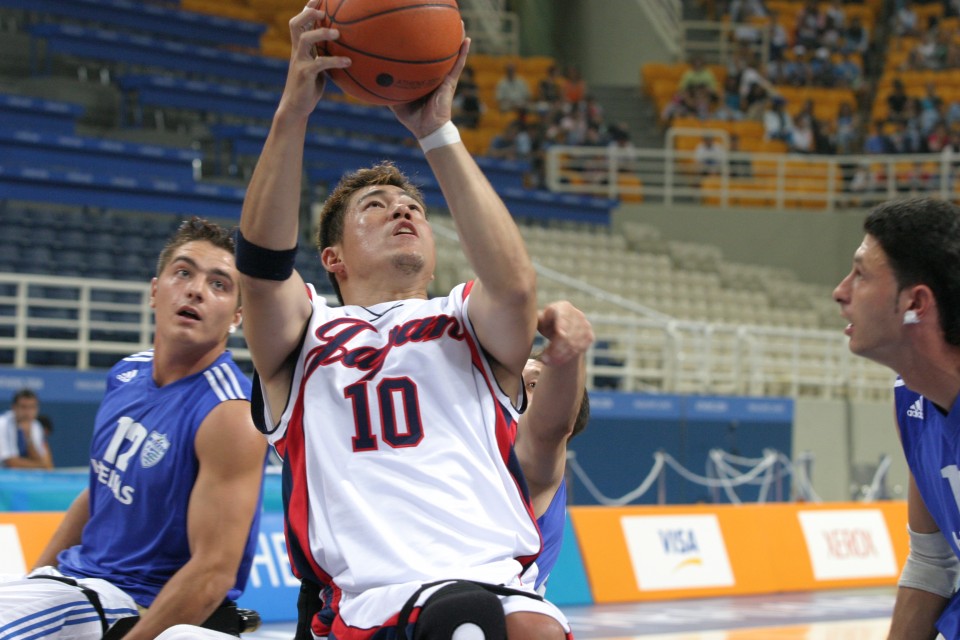 (Yasuhiro Jimbo competes in wheelchair basketball at the 2004 Athens Paralympics in Greece.)[Courtesy of Yasuhiro Jimbo]

The Tokyo native, who competed at four straight games starting from 1992 in Barcelona, has led the design of sport-specific wheelchairs that have become a driver of global success for central Japan's Matsunaga Manufactory Co.

In addition to providing for wheelchair basketball players on the Japanese national team, the company with around 180 employees nationally, is the official supplier for Britain's national teams, powerhouses in both the men's and women's competitions.

"Wheelchair basketball has been a huge part of me and I owe so much to it," Jimbo told Kyodo News in a recent interview.

"I didn't want to be a critic and judge whether a team is good or not. I wanted to be somebody who helps athletes -- that's why I do what I do."

Jimbo injured his spinal cord in a motorcycle accident at the age of 16. He didn't leave his house for about two years, but a friend, who later became a teammate, convinced him to go and watch the sport.

"I was instantly taken by surprise because people were sweating and looked like they were having so much fun," he said. "To be honest, I wasn't sure what it was like to live with a disability. But it made me realize I can still do many things in a wheelchair."

Wheelchair basketball is one of the most popular Paralympic sports. Played on a court the same size and with similar rules as the sport for able-bodied athletes, the men's event has been staged at every Paralympics since the inaugural 1960 Games.

Originally a rehab activity for injured World War II veterans, the sport allows athletes with different degrees of disability to play together. Each player is classified between 1 and 4.5 -- higher numbers indicating greater functional ability -- with the point total of the five players on the court not allowed to exceed 14.

For athletes, the wheelchairs they use can make a huge difference. While wheelchairs for daily use are created to be user-friendly, with features including armrests and push handles, the sport models are meant to be light, nimble and fast to maximize athletes' performance.

At Matsunaga, whose headquarters are in Yoro, Gifu Prefecture, it takes about three days for engineers to hand-build one chair, which costs between 300,000 yen and 400,000 yen (about $2,900-$3,800). The process starts with employees measuring athletes and discussing what features the individual needs to allow him or her to make the best of their unique physical abilities.

When Jimbo joined the company 13 years ago, it did not have a successful sports division. He spent his first months learning about the products and taking phone calls during business hours. After hours, he would work on his own sport model.

"I didn't mind the long hours because I was doing what I loved," he said. "I would ask the engineers to create a chair with certain features. Then I would try it out, but those models didn't sell."

Things started to change after he teamed up with his colleagues. While most manufacturers weld the frame into one piece to reduce weight, Jimbo's colleague came up with a flexible, multiple-element frame.

The "semi-adjustable" wheelchairs allow athletes to adjust the angle of their seats and the axels of the wheels. It also allows them to make sharp turns at high speed and goes a long way toward preventing them from toppling over.

Britain's men's team won the 2018 world championships, with Jimbo as a member of staff. The women's team finished runner-up behind the Netherlands.

Company President Noriyuki Matsunaga said having Jimbo lead the development was an eye-opener, despite the sport models not yet generating significant profits.

"We tried manufacturing wheelchairs for sports before Jimbo joined the company, but we couldn't put ourselves in the athletes' shoes," Matsunaga said.

"There would be 100 preferences for 100 athletes," he said. "The fact that many players use our model means that our products have more than one strength."

At Matsunaga's head office and factory in the town of Yoro, employees draw a blueprint, weld the frame and put everything together. The company's young craftsmen said they can identify their wheelchairs on the court because each is unique.

"Wheelchairs become part of the athlete's body. When I make them, I just hope that it gives them a push during competition," said Ren Watanabe, a 25-year-old employee. 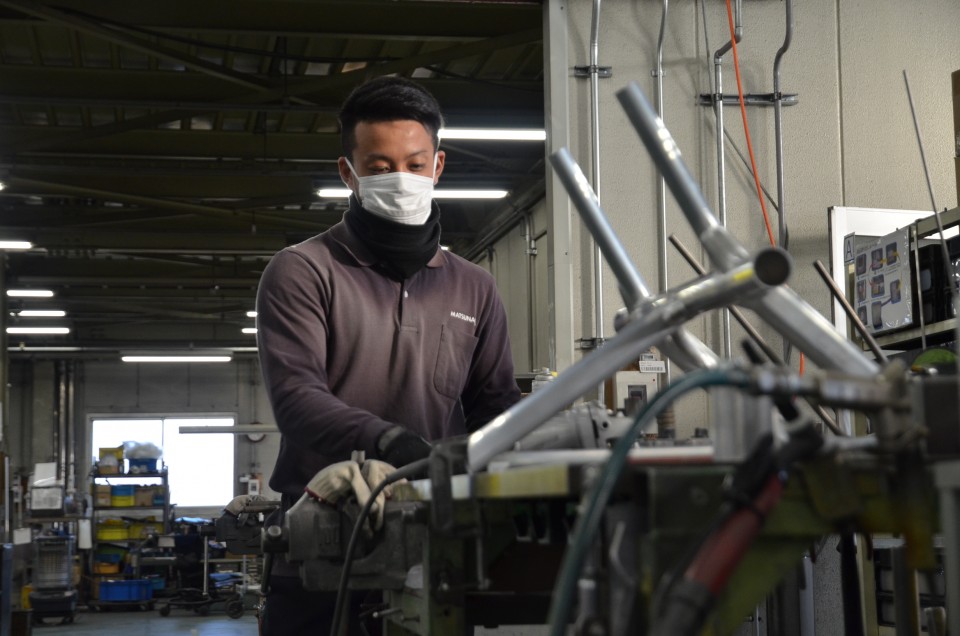 The Tokyo Paralympics, scheduled for Aug. 25 to Sept. 6, will see some 4,400 athletes from around 170 countries competing in 22 sports. However, there is a question whether wheelchair basketball will be staged at the games at all.

The International Paralympic Committee said in January that the sport may be removed from the program if wheelchair basketball's governing body does not reassess the classifications of 4 and 4.5-rated players.

The sport has already been removed from the 2024 Paris Paralympic Games program, but at a meeting on Feb. 28 the IPC said the sport's federation is making progress to ensure it is compliant with the IPC's rules ahead of a 2021 deadline and has a good chance of re-inclusion to the games in France.

For Tokyo, the federation is well on the way to reassessing its athletes, it said.

Knowing from experience what the Paralympics mean to the athletes, Jimbo hopes the younger generation of players will get that chance in Tokyo. 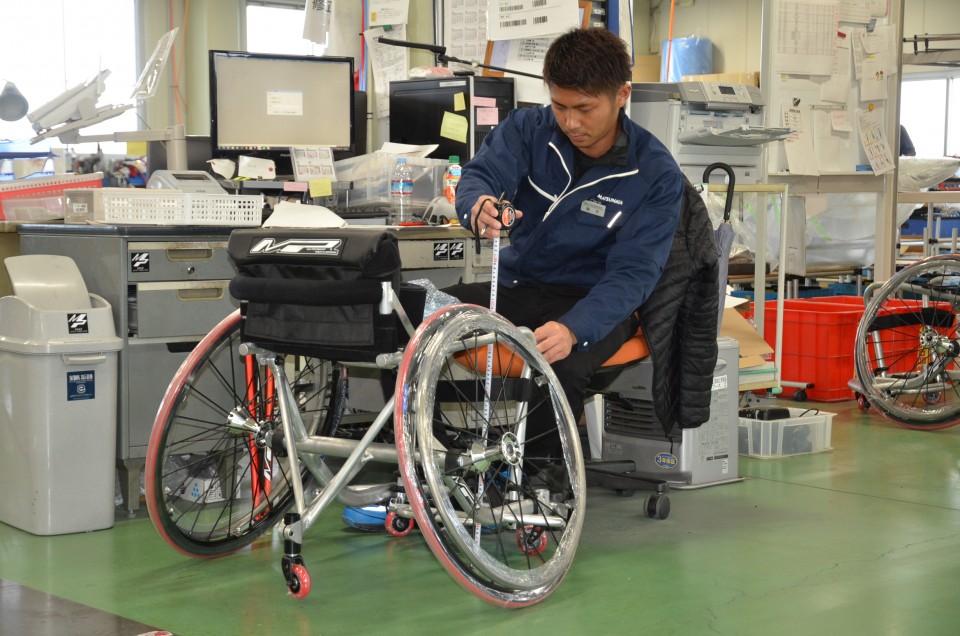 He still recalls getting goosebumps in his 1992 debut at Spain's Pavello Olimpic de Badalona, the same venue where NBA superstar players like Michael Jordan and Magic Johnson earlier led the United States "Dream Team" to the Olympic gold in the men's basketball competition.

Jimbo scored in the final seconds against Sweden, allowing Japan to come from behind and finish in ninth place. He ended up missing the games' closing ceremony because he felt nauseous afterward as a result of the stress.

"The Paralympics were different from any other competition. People say a beast lives at these games, and it's true. I remember being really nervous. My mouth was so dry even when I was on the bench," he said. "It really is a huge confidence-builder that I was able to do my best at four Paralympics."

Jimbo retired from the national team after the 2004 Athens Games. But he continued juggling his work with several companies and the sport until he called it quits in 2016.

During his competitive career, he played in the United States to learn and bring back techniques and coaching methods to Japan, which struggled when competing against the world's best.

In 2006, he flew to Malaysia to coach its national team and share his experience. There, he met players who were struggling with uncertain futures after retirement.

"It is uncommon for people with disabilities to go abroad because of the language barrier and the difficulty of finding a job, all the more reason for a trailblazer like me to go," he said.

"Wheelchair basketball made me who I am today. I want to be an advocate for the sport."

With the Tokyo Games approaching, company President Matsunaga said he hopes the games will create hope, not just for athletes but for all wheelchair users. 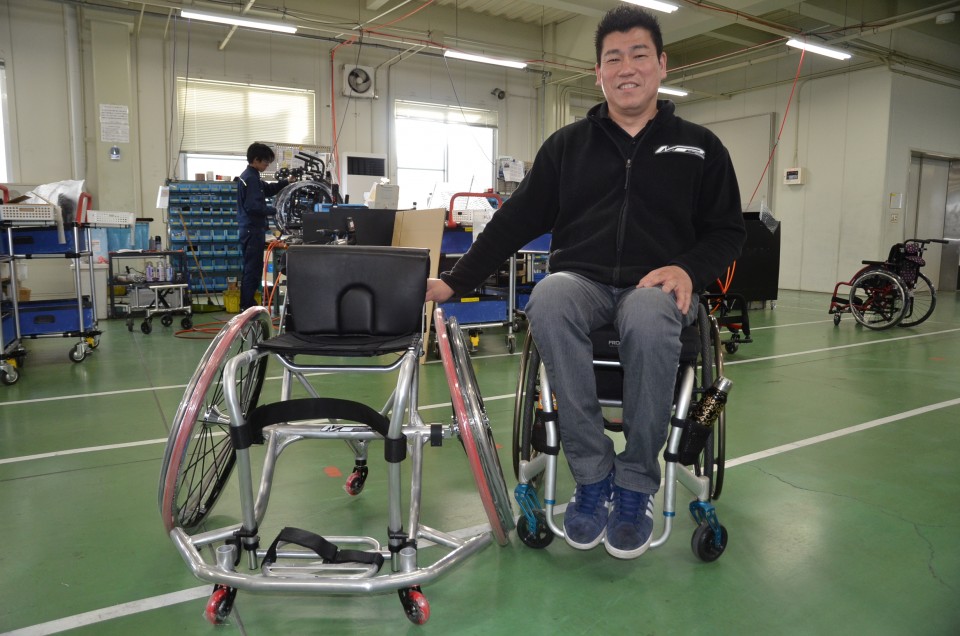 "What wheelchair users want is to recover and walk on their feet. Wheelchairs are substitution tools, but they are not good enough to replace their feet," he said.

"But by watching the Paralympics, I would like people to know that with the right equipment, they do not have to give up on doing what they want. The Paralympics are the best example of that."

Jimbo does not plan on resting after the Tokyo Games. He has big plans to travel to other Asian countries to lend a hand in the sport's development.

"Wheelchair basketball gave me so much and my life changed for the better: I made friends, traveled the world and found a job through the sport. And the excitement hasn't stopped."