The largest bronze mirror and largest "dako" iron sword in Japan were discovered from a late-fourth century tomb mound in the western city of Nara, its board of education and an archeological institute that supported the excavation said Wednesday.

The twin findings from the Tomio Maruyama Tumulus last November can be classified as national treasures, experts say, with the discovery of the shield-shaped mirror being the first of its kind. 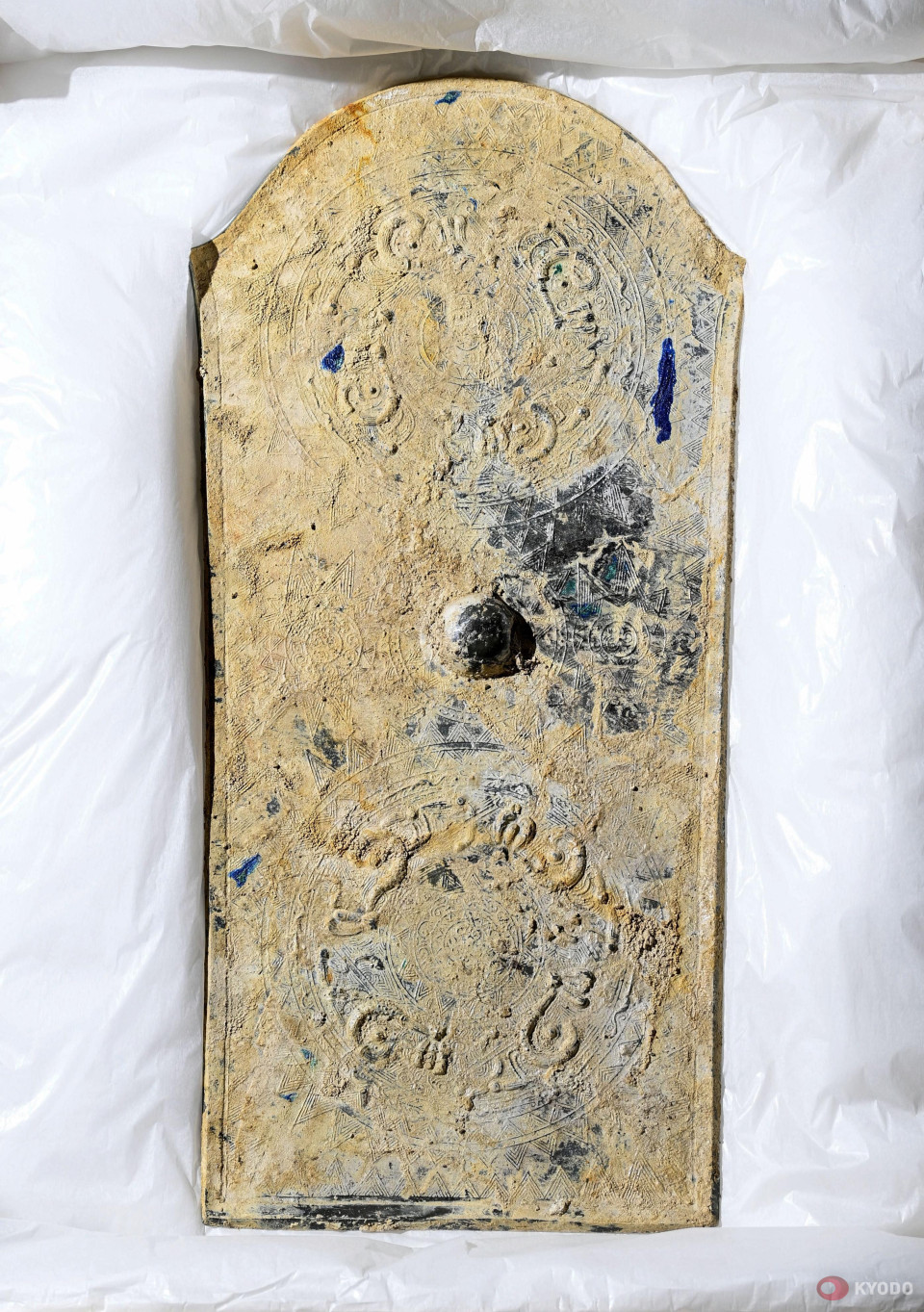 The 2.3-meter sword with a meandering blade is also the largest iron sword made in that period in East Asia.

"(These discoveries) indicate that the technology of the Kofun period (300-710 AD) are beyond what had been imagined, and they are masterpieces in metalwork from that period," said Kosaku Okabayashi, the deputy director for Nara Prefecture's Archaeological Institute of Kashihara.

He called their discoveries a breakthrough in the research of the period, named for the "kofun" tomb mounds built for members of the ruling class.

The patterned surface of the mirror carries the designs of two more common "daryu" mirrors, distinctive with its designs based on imaginative creatures, which have been found mainly in western Japan.

The shield-shaped mirror is 64 cm in length, 31 cm in width at most, and weighs 5.7 kilograms.

The sword is the oldest of dako swords distinguished by their wavy, snake-like shapes, from which their name is derived. More than 80 other dako swords have been excavated throughout Japan so far as burial goods.

The latest sword has markings of a sheath and handle, and together, its length measures 2.6 meters, more than dominating the last longest dako sword discovered at around 85 cm. 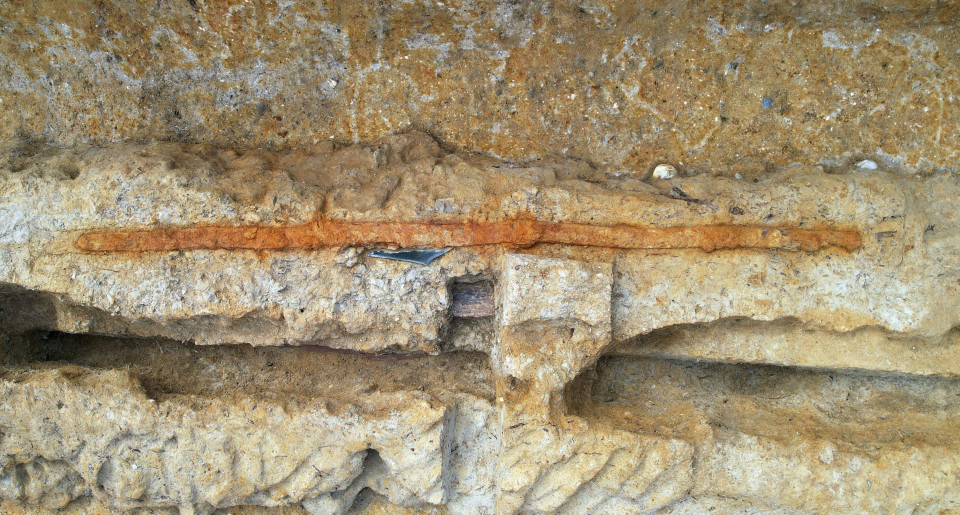 Photo taken on Dec. 5, 2022, shows a sword discovered at the Tomio Maruyama burial mound in Nara, western Japan. (Photo courtesy of Nara city board of education)(Kyodo)

Mirror and shields are considered to be tools to protect the dead from evil spirits. The sword is thought to have been enlarged to increase its power, and the possibility of its use as a battle tool is low, they said. 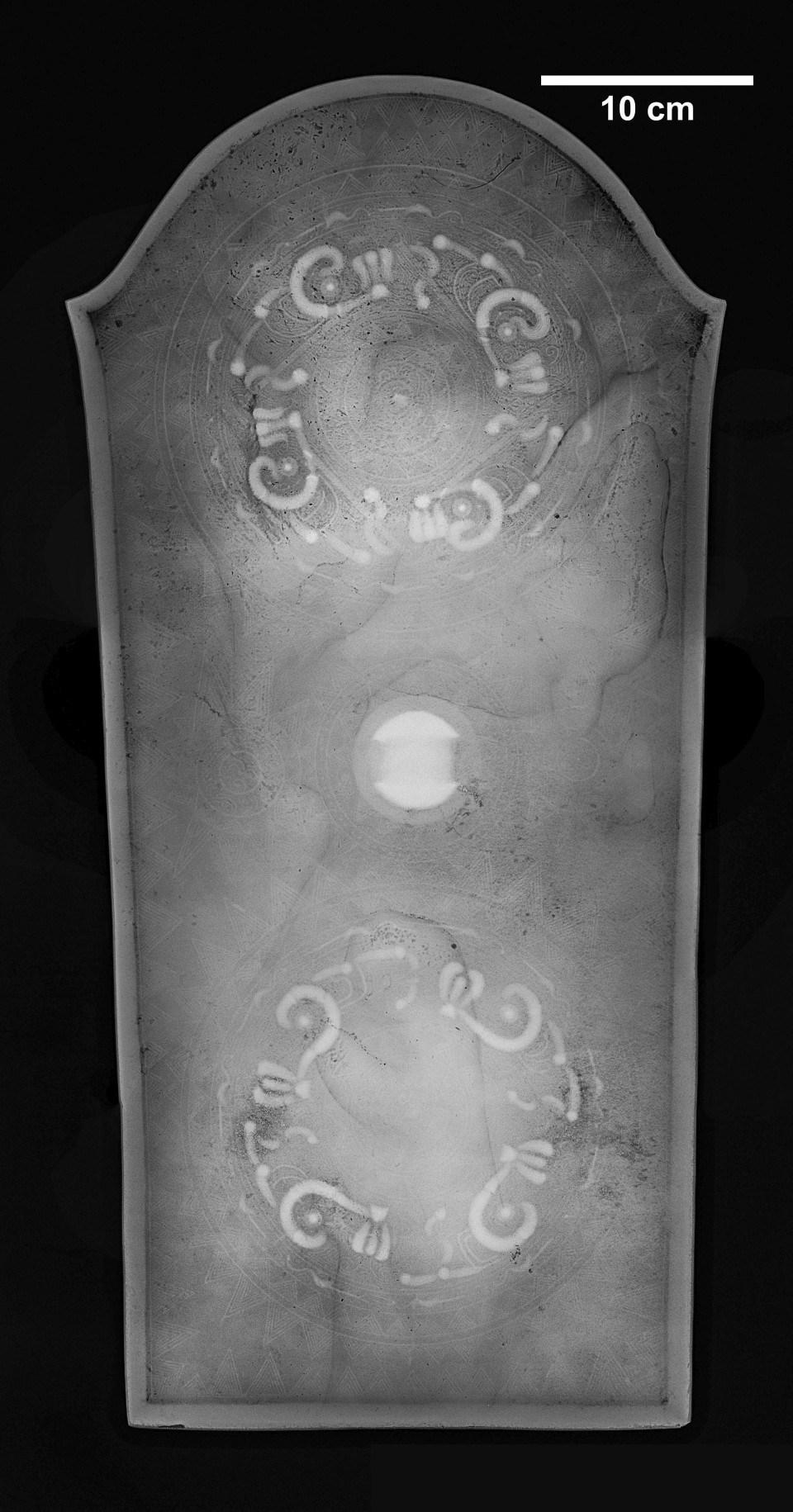 The Tomio Maruyama burial mound, the largest in Japan at 109 m in diameter and dating back to the late 4th century, is thought to have belonged to a powerful individual supporting the Yamato rulers of the time.

The burial chamber where the discoveries were made is thought to have belonged to someone close to that person, according to Naohiro Toyoshima, an archaeology professor at Nara University. He also said that the ritualistic sword and the shield-shaped mirror may indicate that the individual was involved in military and ritualistic matters.

Riku Murase, 32, who was on the excavation team that discovered the objects, said the sword's length was so astounding that his team initially thought it was several swords. He also thought they had found a unique bronze plate.

"It was my dream to dig up a mirror. Who knew that it would be something so incredible," he said.

The excavation area is open to the public on Saturday from 12:30 p.m. to 3 p.m., and on Sunday from 10 a.m. to 3 p.m. The mirror and sword will not be exhibited as they are undergoing preservation work. 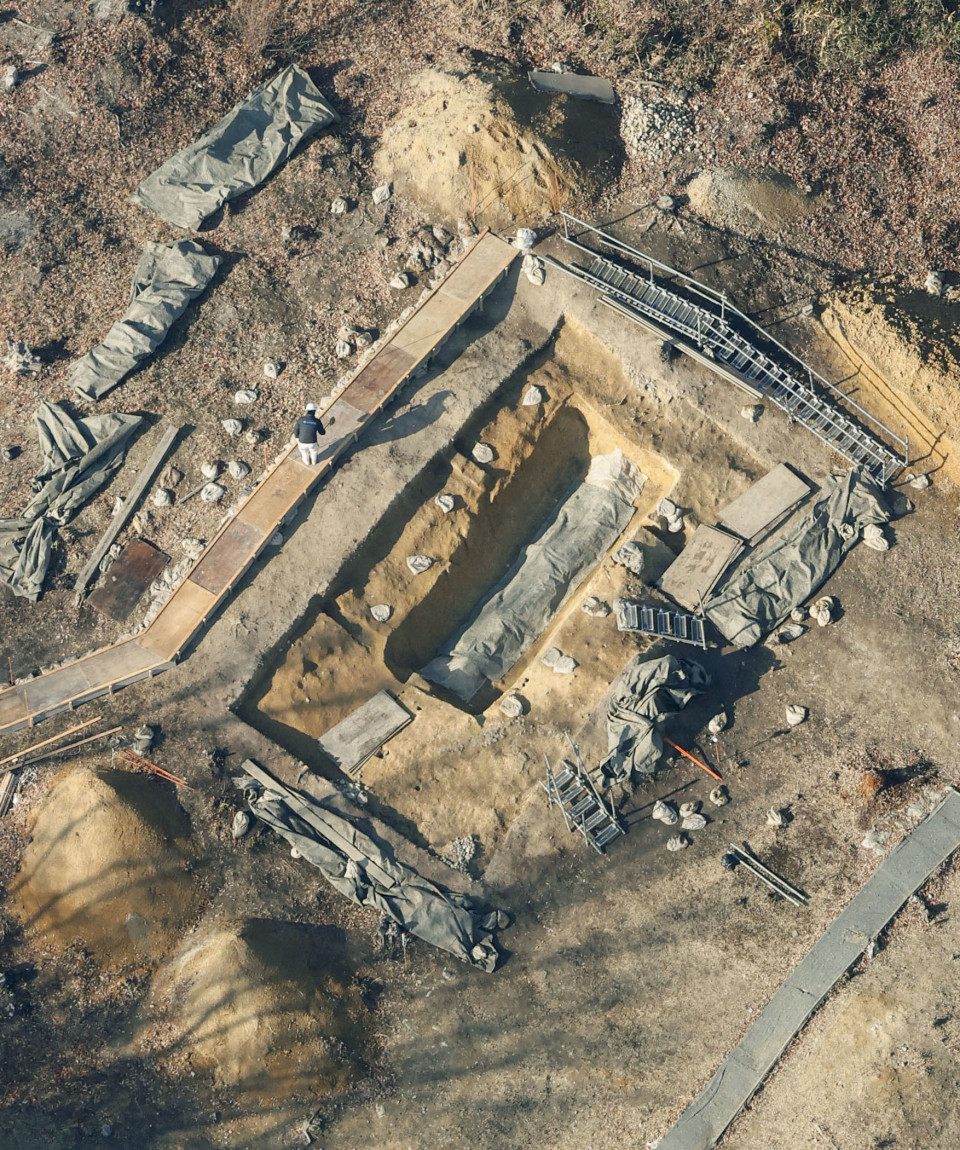 Photo taken from a Kyodo News helicopter on Jan. 20, 2023, shows the Tomio-Maruyama tomb mound in the western Japan city of Nara. (Kyodo)