The 25-year-old cut in from the left and curled an unstoppable effort from outside the box into the far top corner in the 27th minute at King Power Stadium. 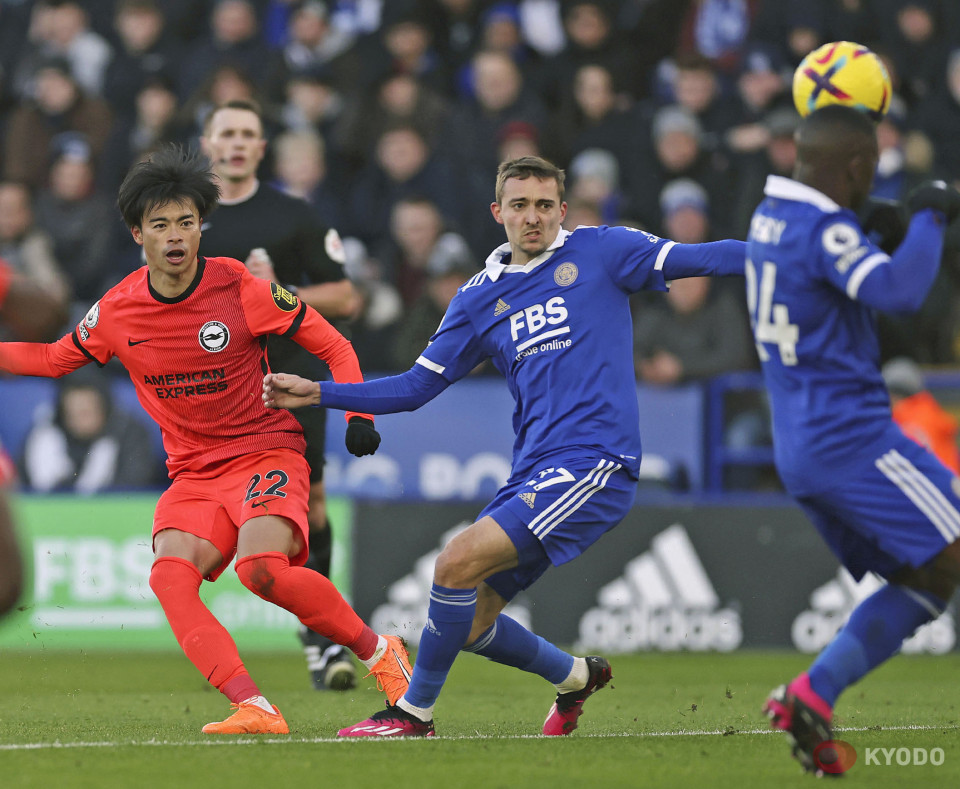 Brighton's Kaoru Mitoma (L) scores the opener in their 2-2 draw at Leicester in the English Premier League on Jan. 21, 2023, at King Power Stadium in Leicester, England. (Kyodo)

"I'm always looking for that sort of chance. My pre-match feeling was also good," said Mitoma after netting his third goal in four league games. "I could relax as I had space and the shot found a nice gap."

Marc Albrighton equalized in the 38th minute and Harvey Barnes made it 2-1 for Leicester following a corner in the 63rd minute, but 18-year-old Evan Ferguson ensured a share of the points for the visitors when he headed home Pervis Estupinan's cross off the post two minutes from time.

Mitoma missed out an assist in the 57th minute when an unmarked Solly March totally miscued his cutback, but the Japan star continues to thrive under manager Roberto De Zerbi following the Italian's appointment in October.

"Wide players have to get involved in goals given our tactics, and that has instilled greater consciousness in me about scoring," said Mitoma, who nailed down a regular starting spot in the side after the World Cup, displacing Leandro Trossard, who then moved to Arsenal.

In Scotland, Kyogo Furuhashi had a double and took his season's tally to 20 goals as Celtic hammered Greenock Morton 5-0 at home in the Scottish Cup fourth round.

Furuhashi slotted past the goalkeeper in the 21st minute for a 2-0 lead, set up David Turnbull in the 42nd minute and fired in Celtic's fourth from a tight angle in first-half stoppage time before coming off at the break.

Daizen Maeda and Yuki Kobayashi played the entire game, while new signing Tomoki Iwata made his Celtic debut as he came on for the second half. Aaron Mooy scored the first and last goals for the home side.

Forward Koki Saito scored his first goal for Sparta Rotterdam, making it 2-0 in the 18th minute in their 3-0 win away to Cambuur in the Dutch Eredivisie.

Wataru Endo set up Serhou Guirassy's 36th-minute opener but Stuttgart were held to a 1-1 home draw with Mainz in the German Bundesliga. Soichiro Kozuki made his debut for Schalke as he played 74 minutes in a 3-0 defeat at Eintracht Frankfurt. 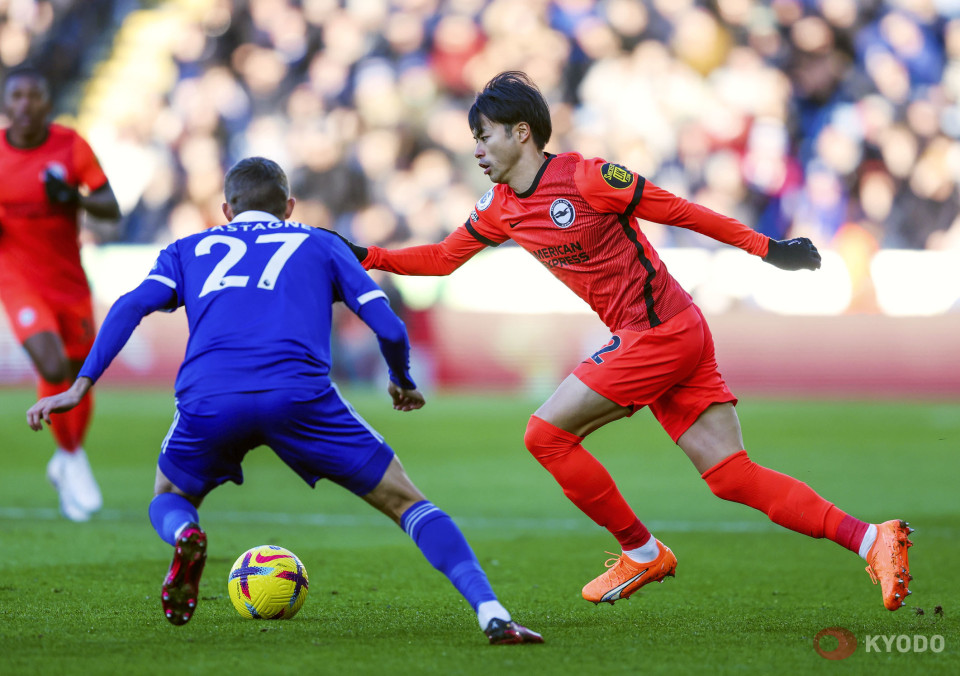 Brighton's Kaoru Mitoma takes on a defender during the first half of a football match against Leicester in the Premier League on Jan. 21, 2023, at King Power Stadium in Leicester, England. (Kyodo) ==Kyodo