FOCUS: Japan to build up defense from 2023 with China, North Korea in mind

Japan will start strengthening its defense posture from this year based on three key documents that the government revised last December to better adapt to the deteriorating security environment in the surrounding region.

In its most extensive defense buildup since World War II, Japan will spend 43 trillion yen ($326 billion) over five years from fiscal 2023, a major increase from the 27.5 trillion yen earmarked for the existing five-year plan from fiscal 2019, according to the new strategy announced by Prime Minister Fumio Kishida.

One of its most critical features is the country's pledge to acquire "counterstrike capabilities," allowing it to strike enemy territory directly in the event of an emergency.

Based on the war-renouncing Constitution, Tokyo had previously avoided possessing such capabilities, relying instead on the United States to be both "spear and shield." However, according to the new strategy, the capabilities would only be used within the scope of the Japan-U.S. alliance. 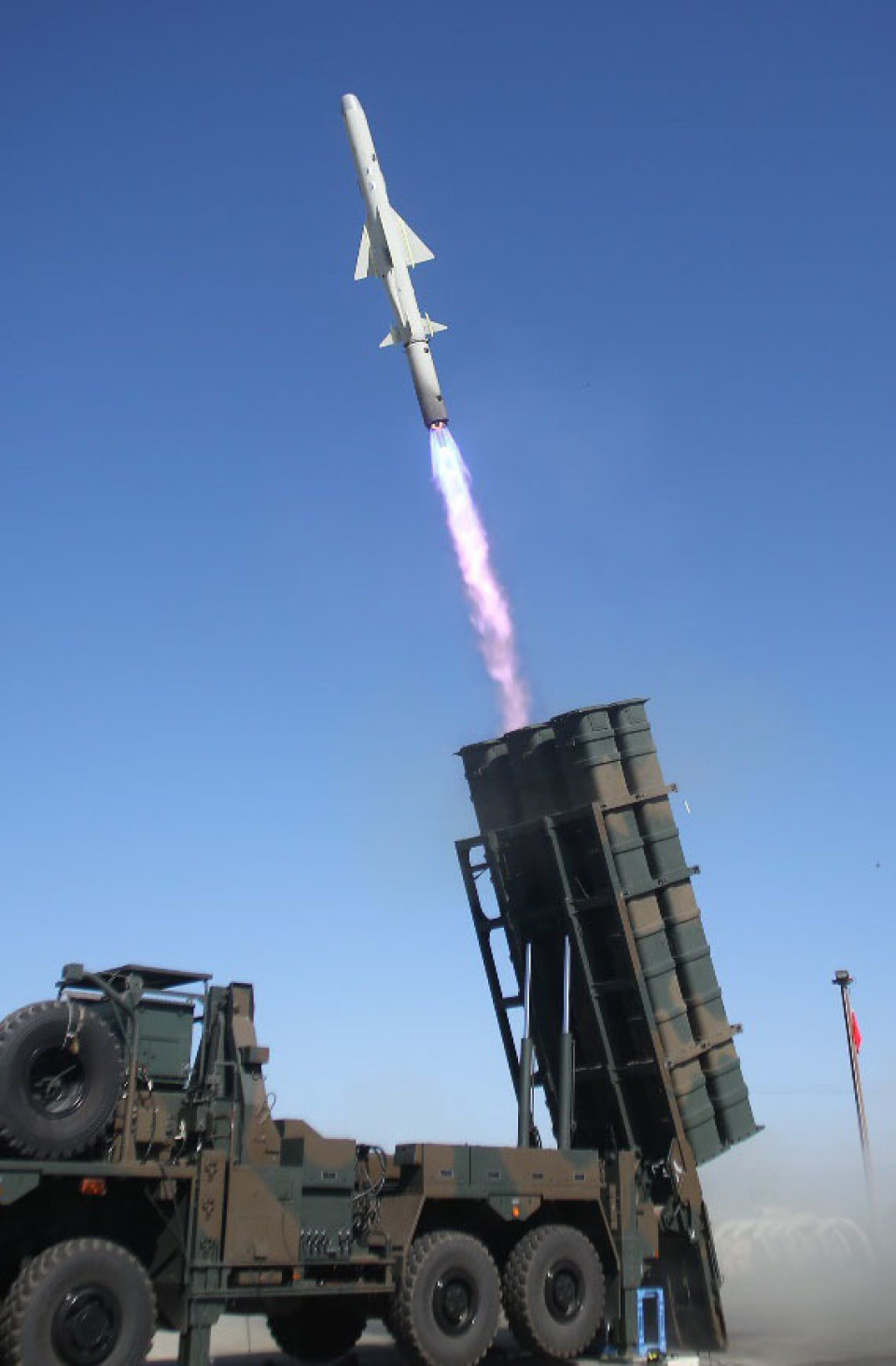 The turning point for Japan has been Chinese bellicosity, with its surging military expenditure, challenges to the status quo in the Indo-Pacific region and growing provocations against Taiwan, as well as North Korea's rapid advances in missile technology and increased pace of ballistic missiles launches since last year.

The Russian invasion of Ukraine also contributed to the decision to strengthen Japan's defense capabilities, according to Japanese officials.

Kishida explained when announcing the new strategy that the counterstrike capabilities would be a deterrent to discourage a potential enemy from attacking. The documents say the capabilities will both "deter an armed attack itself" and "prevent further attacks" if the deterrence fails.

"The move comes as Japan aims to maintain the status quo against challengers. Counterstrike capabilities are vital as they are expected to become one of the critical components to enhance deterrence vis-a-vis China," said Satoru Mori, an international security expert at Keio University.

Japan also needs to strengthen its integrated missile defense capability, cyber defense and the ability to counter disinformation to have a credible deterrence, he said.

To obtain counterstrike capabilities covering China and North Korea, Japan is slated to develop homemade missiles with a range of more than 1,000 kilometers and begin deploying them in fiscal 2026.

Until it is able to mass-produce those missiles, Japan will also procure U.S.-made Tomahawk missiles, which have a strike range of about 1,600 km.

The capabilities are likely to make China and North Korea feel less confident of successfully achieving their goals through force against Japan as their ability to follow up on first strikes would be hampered, said Sugio Takahashi, head of the Defense Policy Division at the National Institute for Defense Studies.

Although a recent Kyodo News poll suggests that 50.3 percent support acquiring such capabilities while 42.6 percent disapprove, 64.9 percent oppose a plan to raise corporate and tobacco taxes to finance the increase in defense spending.

There are also concerns that the capabilities could be used preemptively since the government's standpoint is that Japan can also launch strikes to prevent attacks being prepared by adversaries.

Kenta Izumi, leader of the main opposition Constitutional Democratic Party of Japan, said in a statement that he opposes acquiring the capabilities. He argued that in practice, preparations to attack are difficult to perceive and that attacks in such circumstances could be regarded as a first strike, which the Constitution bans. 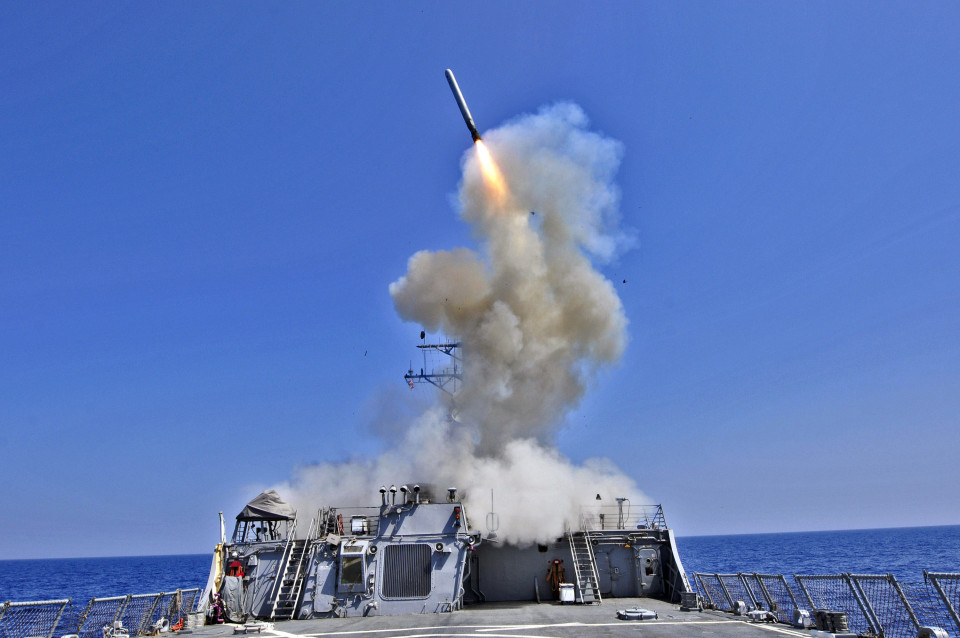 Handout released by the U.S. Navy shows a Tomahawk cruise missile launched from a U.S. Navy guided-missile destroyer in the Mediterranean Sea in March 2011. (U.S. Navy/Getty/Kyodo)

Security experts oppose the notion of attacking when potential adversaries are preparing to strike.

"If we look at the ongoing war in Ukraine, attaining the international community's support is vital. It is extremely important and necessary to make clear who the aggressor is," said Mori.

"Japan should use the capabilities after it is attacked as it would be able to intercept the first and possibly the second wave of ballistic missiles with the BMD," Takahashi said, referring to the Ballistic Missile Defense system that Japan has developed to defend against missiles attacks.

Outside Japan, South Korea reacted to the plan to acquire the capabilities by saying consultations and agreement would be necessary beforehand if Japan were to exercise counterstrikes on the Korean Peninsula.

North Korea and China both lambasted the documents. Beijing said that Japan's "hyping up of the China threat to find an excuse for its military buildup is doomed to fail."

Discussions of possible scenarios of an emergency over Taiwan have emerged as Beijing, which regards Taiwan as a renegade province, repeatedly stresses that it does not rule out the use of force to bring the self-ruled democratic island under its control.

Takahashi said capabilities to target missile launch pads could be practical against North Korea, but, for China, it would be adequate to aim at air bases or vessels because its targets would be islands, whether Taiwan or the Senkaku Islands.

The Senkakus are a group of East China Sea islets controlled by Tokyo but claimed by Beijing.

Mori said the counterstrike capabilities should reduce China's confidence in achieving its primary goal of seizing Taiwan by force.