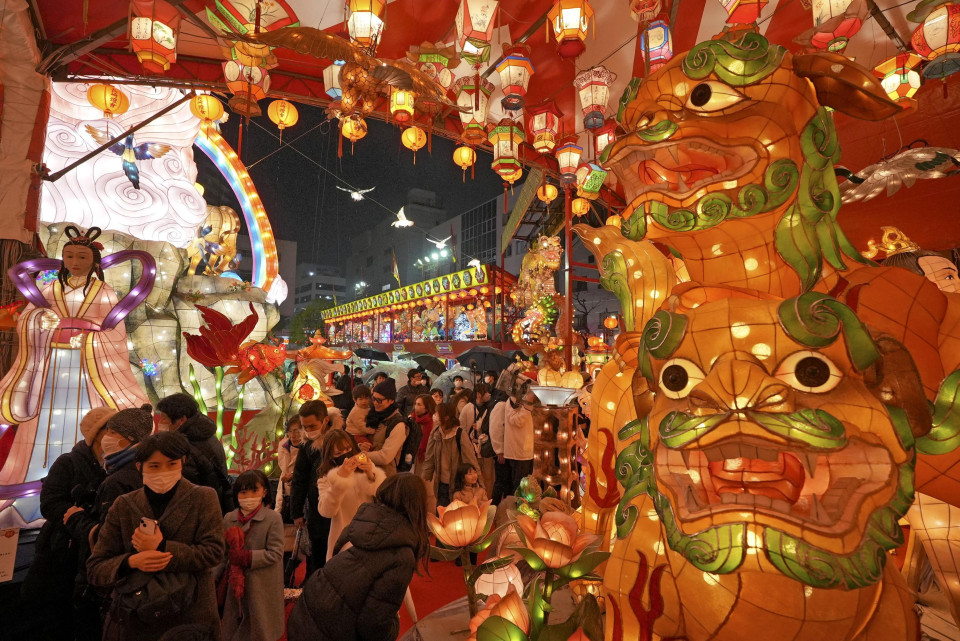 Colorful lanterns and large works of art adorn the southwestern Japan city of Nagasaki on Jan. 22, 2023. The Nagasaki Lantern Festival started the same day to coincide with the start of the Chinese Lunar New Year. ==Kyodo

TOKYO - Japan's lower house chief on Tuesday denied accusations of inappropriate relations with the Unification Church, but refused to publicly discuss the issues surrounding the religious group that have dampened the popularity of Prime Minister Fumio Kishida's Cabinet.

On the second day of the ordinary parliamentary session that began Monday, House of Representatives Speaker Hiroyuki Hosoda held talks with ruling and opposition lawmakers to answer questions on his connections with the Unification Church.

TOKYO - Snow fell in parts of northern and western Japan facing the Sea of Japan as a cold air mass blew into the archipelago Tuesday, with flights canceled and the weather agency warning of heavy snow in other areas and traffic disruption due to frozen roads.

Wide areas of the country, including the Pacific side, could see heavy snowfall from Tuesday evening to Wednesday, as low-pressure systems near Hokkaido and south of Japan will bring the coldest air of this winter, making atmospheric conditions extremely unstable, the Japan Meteorological Agency said.

TOKYO - Japan's primary deficit will triple from its earlier projection to 1.5 trillion yen ($11.5 billion) in fiscal 2025, the target year when the government aims to turn a surplus, due to a substantial increase in defense spending, government projections showed Tuesday.

The revised projections are based on the assumption that Japan's economy will grow 2 percent in real terms, with the balance possibly deteriorating further if economic growth slows.

TOKYO - Japanese and Cambodian foreign ministers agreed Tuesday that their countries will continue to cooperate in supporting the elimination of Russian landmines and unexploded bombs in Ukraine amid Moscow's prolonged war in the Eastern European state.

Foreign Minister Yoshimasa Hayashi said after a meeting with his Cambodian counterpart, Prak Sokhonn, in Tokyo that they also pledged to further promote ties between Japan and Cambodia as this year marks the 70th anniversary of the establishment of their diplomatic ties.

NAGASAKI - A Japanese court on Tuesday ordered the Nagasaki prefectural government to pay damages to an American woman who claimed she was sexually harassed while working as an assistant language teacher at a prefectural high school.

The Nagasaki District Court ordered the local government to pay 500,000 yen ($3,800) in damages to Hannah Martin, who had sought 2 million yen, saying she had suffered mental anguish due to sexual harassment by a vice principal and a male assistant language teacher.

Chinese invasion of Taiwan may not be imminent: Japan envoy to U.S.

WASHINGTON - Japan's ambassador to the United States said Monday the possibility of China invading Taiwan is "not necessarily imminent" but it is important to constantly send a clear message to Beijing that the two allies have a "strong interest" in peace and stability in the self-ruled island.

"We were able to confirm that the positions of the two countries are in agreement at a very high level," Koji Tomita said in an interview, touching on Prime Minister Fumio Kishida's first visit earlier this month to Washington since taking office in October 2021 for talks with U.S. President Joe Biden.

The meeting, closed to the press, will also be attended by the other foreign affairs chiefs of the Group of Seven major democratic economies and key partners, the State Department said Monday.

TOKYO - Japanese TV personality Dewi Sukarno, widow of former Indonesian President Sukarno, has traveled to Ukraine, with Japan's government on Tuesday saying she should not have made the journey to the Eastern European state invaded by Russia.

On Monday, Dewi visited the Ukrainian capital of Kyiv and its suburb of Bucha, where hundreds of civilian bodies were unearthed last year, to deliver relief supplies such as warm clothes and diapers to internally displaced people.