Japanese Prime Minister Fumio Kishida and U.S. President Joe Biden pledged Friday to develop the Asian nation's defense capabilities, a month after Tokyo made a major shift in its defense policy with an eye on China's military provocations against Taiwan.

Kishida, on his first trip to the U.S. capital since he took office in October 2021, and Biden also agreed the two countries will deepen security ties and cooperate to secure semiconductor supply chains to counter China's economic clout in the region.

Biden hailed Japan's decision to bolster its defense capabilities, telling Kishida at the outset of their talks that it was "historic" and the United States is "fully, thoroughly, completely" committed to the bilateral security alliance.

"Rather than figuring out how we can work more closely together, the more difficult job would be trying to figure out where we disagree," Biden added.

China, which has lambasted Japan and the United States for trying to thwart its military and economic ambitions, is expected to react sharply to the agreement between the two democracies. 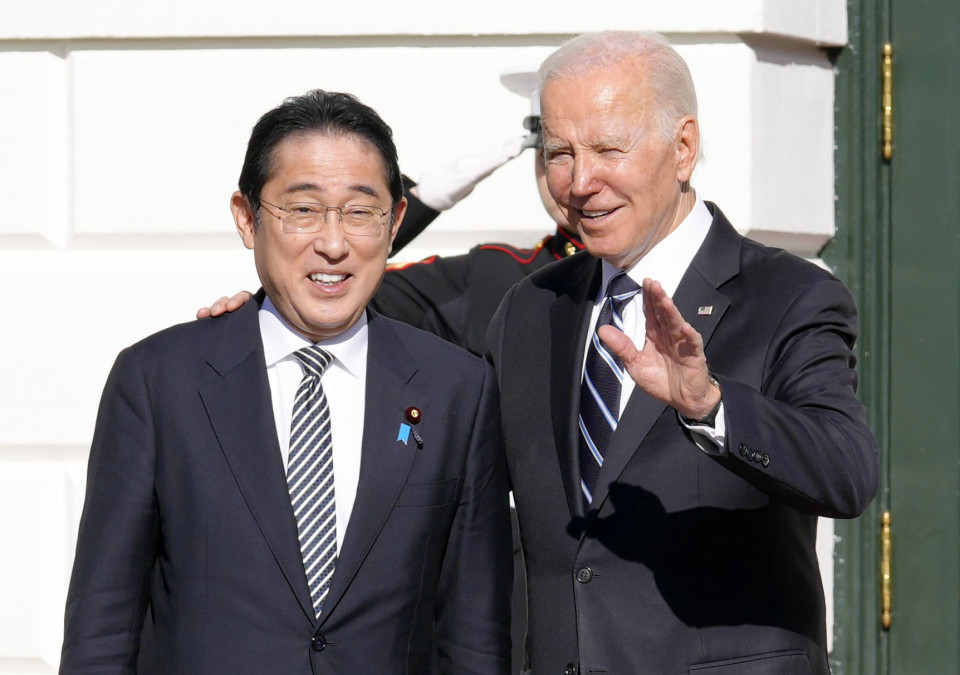 The meeting in Washington between Kishida, who represents a constituency in Hiroshima, and Biden came around four months ahead of the Group of Seven summit to be held in the western Japan city devastated by a U.S. atomic bombing in August 1945.

The leaders said in a joint statement released after the Japan-U.S. summit, "We emphasize that our basic positions on Taiwan remain unchanged," adding, "We encourage the peaceful resolution of cross-Strait issues."

Kishida and Biden "reiterate the importance of maintaining peace and stability across the Taiwan Strait as an indispensable element of security and prosperity in the international community," according to the statement.

In December, Japan decided to almost double its defense spending over the next five years and to acquire enemy base strike capabilities under the war-renouncing Constitution to deter attacks on its territory, amid growing threats from its neighbors China and North Korea.

In the wake of the move, Kishida and Biden "instructed their ministers to reinforce cooperation on the development and effective employment of Japan's counterstrike and other capabilities," the statement said.

The Japanese government has already announced that it will allocate 211.3 billion yen ($1.65 billion) in the initial budget for fiscal 2023 to procure U.S.-made long-range Tomahawk cruise missiles to enhance its counterstrike capabilities.

The two leaders also said, "We have aligned our collective force posture and deterrence capabilities to meet new and emerging threats, including in the cyber and space domains," while vowing to boost cooperation on nuclear power for energy security. 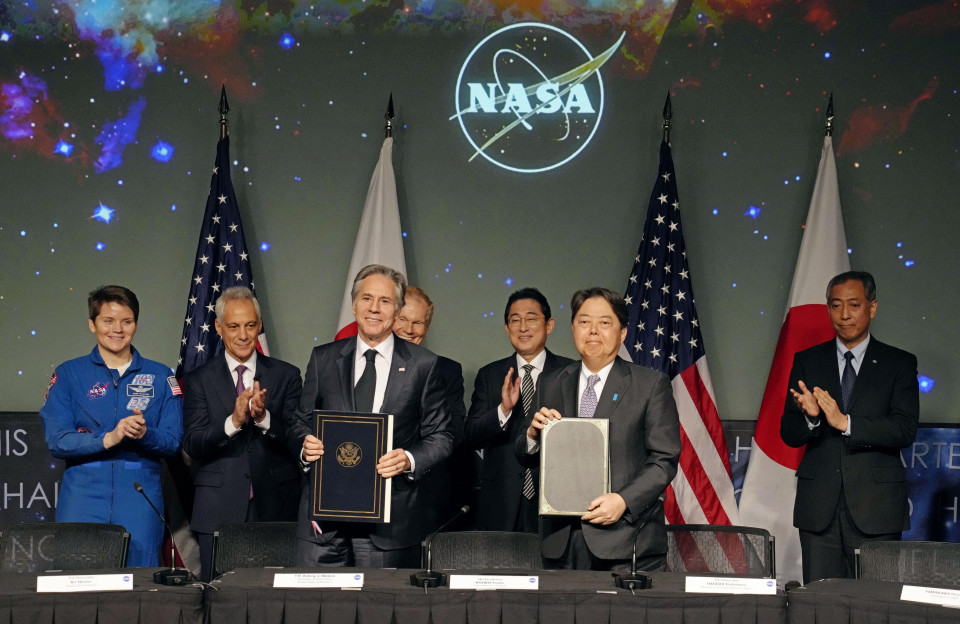 At the White House, Kishida told Biden that Japan and the United States are facing a "complex security environment," adding that Tokyo's latest defense policy shift will contribute to strengthening "deterrence" alongside Washington.

Fears are mounting that Taiwan may become a military flashpoint in the Indo-Pacific region in the near future, as Communist-led China regards the self-ruled democratic island as a renegade province to be reunified with the mainland, by force if necessary.

Kishida and Biden reaffirmed close cooperation to promote a "free and open Indo-Pacific," a vision seen as a response to China's increasing assertiveness in the Asia-Pacific region.

Regarding the Senkaku Islands in the East China Sea, Biden confirmed the islets are covered by Article 5 of the 1960 Japan-U.S. security treaty, as Tokyo relies heavily on Washington for military protection.

The provision calls for the United States to defend territories under Japanese administration from armed attack.

The uninhabited islands are administrated by Japan, but China has laid claim to them since the early 1970s, calling them Diaoyu, after studies by the United Nations indicated there might be potentially lucrative gas reserves around them.

The Senkakus are also under the jurisdiction of Japan's southern island prefecture of Okinawa -- a geopolitically important region that still hosts the bulk of U.S. bases in the country over 50 years after it reverted to Japan in 1972 following post-World War II U.S. rule.

Among other issues, Biden reaffirmed "U.S. commitment to the immediate resolution" of the unresolved abductions of Japanese nationals by North Korea in the 1970s and 1980s, while seeking the "complete denuclearization" of Pyongyang.

Kishida and Biden, meanwhile, voiced "firm opposition to Russia's unjust and brutal war of aggression against Ukraine," saying Japan and the United States will continue imposing sanctions on Moscow.

As for the COVID-19 pandemic, Kishida and Biden urged China "to report adequate transparent epidemiological and viral genomic sequence data regarding the spread" of the coronavirus, first detected in the nation's central city of Wuhan in late 2019.

Since late last year, China has drastically eased its strict antivirus rules in an abrupt departure from its "zero-COVID" policy involving lockdowns and isolation measures. The shift has been followed by an explosion in cases nationwide.

The United States is the final stop on Kishida's weeklong tour of five of the G-7 countries in Europe and North America in the run-up to the May gathering. He met Biden after having breakfast with U.S. Vice President Kamala Harris.

Kishida and Biden agreed to keep working "closely toward a successful summit so as to demonstrate the G-7's commitment to upholding the international order based on the rule of law," the statement said.