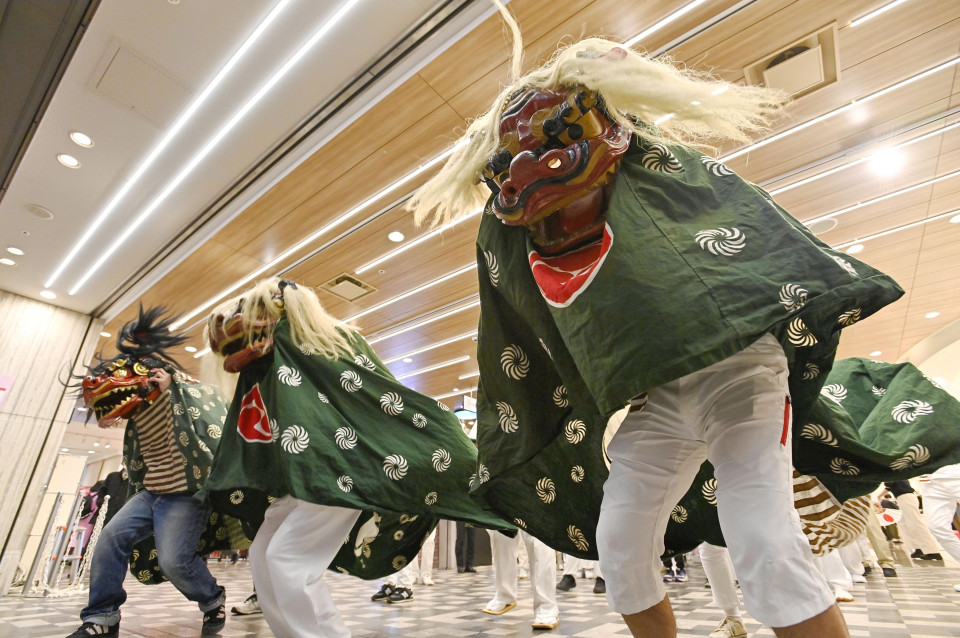 A lion dance is performed during a New Year sale at a Kintetsu department store at Abeno Harukas commercial facility in Osaka, western Japan, on Jan. 2, 2023. (Kyodo) ==Kyodo

While the two leaders have already held talks multiple times, including in Japan where Biden traveled last year, Kishida's upcoming trip would be his first visit to the U.S. capital since taking office in October 2021.

Kishida also said at a press conference after visiting the Ise Jingu shrine in Mie Prefecture that his government will implement measures to invite overseas universities to Japan in a bid to promote investment in the Asian nation from abroad.

TOKYO - Tokyo stocks got off to a bumpy start Wednesday, the first trading day of 2023, with the Nikkei ending at a 10-month low amid fears that the Bank of Japan could move further toward monetary tightening and a firming yen against the U.S. dollar.

Japan to tighten border controls for travelers from China: PM

Starting Sunday, visitors from China will need to have tested negative before leaving for Japan and will have to undergo a PCR test upon arrival, the premier said at a press conference.

BEIJING - Chinese President Xi Jinping and his Philippine counterpart Ferdinand Marcos Jr. began talks in Beijing on Wednesday, with the two countries expected to agree on a "direct communication" line to avoid "miscalculations" in the South China Sea, where they have overlapping territorial claims.

The summit meeting at the Great Hall of the People in the Chinese capital came as Marcos has vowed to take a different path from his predecessor, Rodrigo Duterte, known for his appeasement of China, and moved toward strengthening ties between Manila and Washington.

There were 26 fewer deaths in 2022 compared with the previous year, in the lowest figure since 1948, the first year for which comparable data is available. People aged 65 and over made up the largest demographic at 56.4 percent with 1,471 deaths, although that figure was down by 49 from 2021, according to the National Police Agency.

Suspect denies killing family of 3 near Tokyo in December

SAITAMA, Japan - The suspect in the deaths of three family members last month at a residence in Saitama Prefecture, north of Tokyo, has denied killing them, police said Wednesday.

DNA from blood found on clothing confiscated from the home of the suspect, Jun Saito, 40, matches that of all three victims, police also said, adding they suspect it was worn by Saito at the time of the crime.

TOKYO - Japan's central and local governments, alongside many businesses, marked the year's first day of work Wednesday as the country refrained from implementing travel restrictions despite a rise in the number of COVID-19 cases.

As of Tuesday, nationwide daily COVID-19 figures stood at around 90,000, with Japan strengthening its entry restrictions for travelers from China which has seen virus cases surge since it abandoned its strict "zero-COVID" policy.