China conducted Sunday combat exercises in waters and airspace around Taiwan, according to the country's military, with the self-ruled democratic island saying the following day that four Chinese warships and 57 military aircraft were detected.

They were aimed at resolutely countering "the collusive and provocative acts of the external forces and the 'Taiwan independence' separatist forces," said Army Senior Col. Shi Yi, the spokesman for the People's Liberation Army Eastern Theater Command covering the Taiwan Strait. 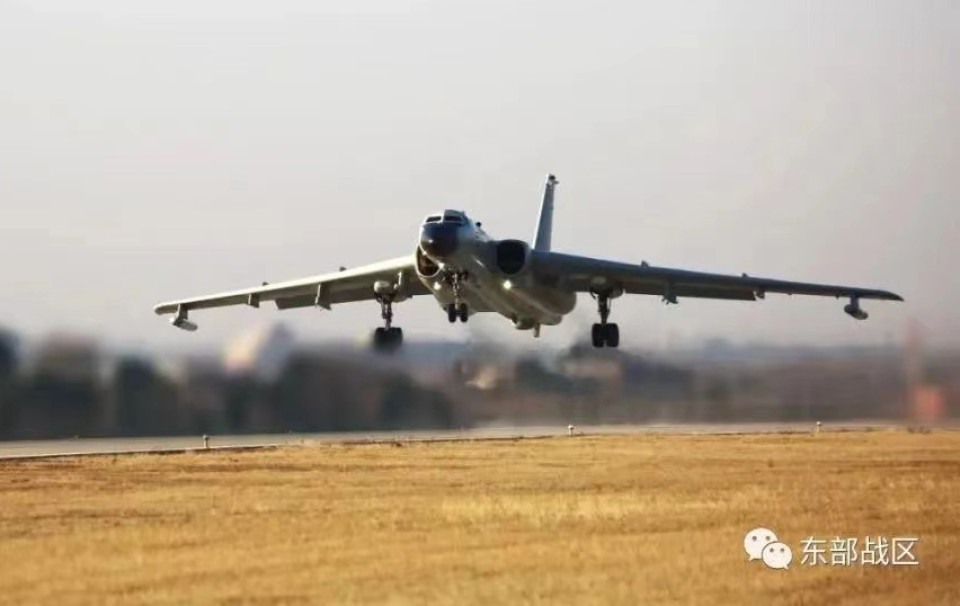 Photo posted by the People's Liberation Army Eastern Theater Command on its WeChat account on Dec. 25, 2022, shows a bomber upon takeoff. (Kyodo)

The island's Defense Ministry said Monday 28 of the 57 aircraft detected in the 24 hours through 6 a.m. had crossed the median line between the mainland and Taiwan, a boundary that had been respected by both sides for decades, and entered the territory's air defense identification zone.

The ministry said the Taiwan military has tasked its aircraft, vessels and land-based missile systems to respond to these activities.

On Monday, a delegation of German lawmakers arrived in Taiwan for a four-day visit, during which they are scheduled to meet with President Tsai Ing-wen, according to German news agency dpa.

Mainland China and Taiwan have been governed separately since they split in 1949 due to a civil war. Beijing endeavors to bring the island into its fold, by force if necessary.

Since last August when then U.S. House of Representatives Speaker Nancy Pelosi visited the island, China has been increasing its military pressure on Taiwan. It opposes high-level visits to the territory, saying they run counter to the "one-China" principle.