A wide area of Japan is bracing for more heavy snow and strong winds Wednesday as the coldest air of this winter stays over the archipelago, with authorities warning of traffic disruptions due to frozen roads and high waves.

The weather agency forecast subzero temperatures in many locations from the northernmost island of Hokkaido to the Kyushu region in the southwest on Wednesday morning, with the mercury expected to drop to minus 3 C in Tokyo and minus 2 C in Osaka.

Japan Airlines and All Nippon Airways plan to cancel more than 200 flights Wednesday and JR East will suspend bullet train service between Fukushima and Shinjo on the Yamagata Shinkansen Line in the northeastern Tohoku region throughout the day. 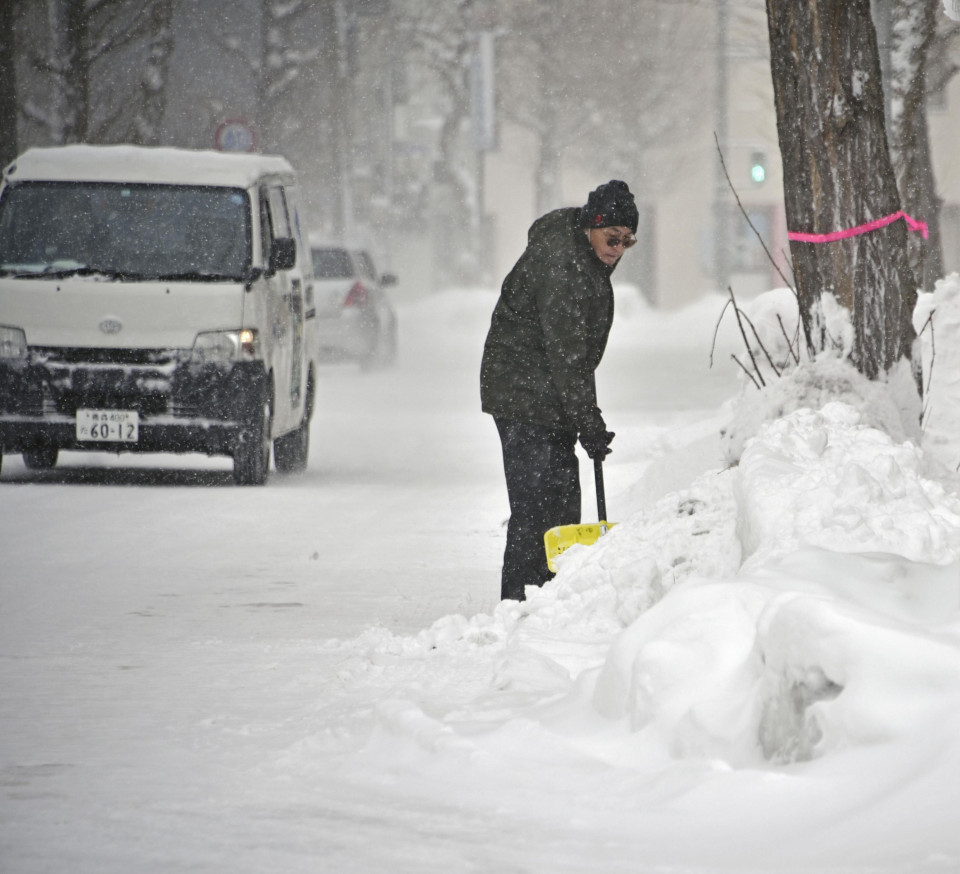 As the strong winter patterns are expected to hold through Thursday, some parts of the country could see their lowest temperatures in a decade, the Japan Meteorological Agency said.

Low-pressure systems near Hokkaido are bringing the coldest air of this winter, making atmospheric conditions extremely unstable, the agency said. 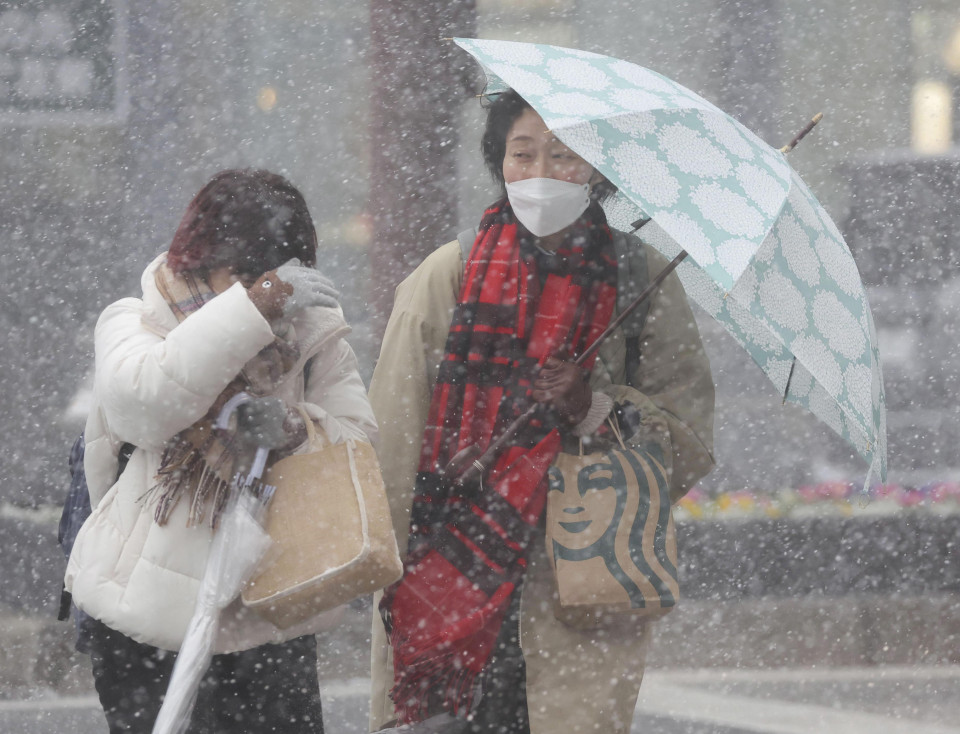 People walk amid snow and heavy wind in the southwestern Japan city of Fukuoka on Jan. 24, 2023. (Kyodo) ==Kyodo

In the 24 hours through 6 p.m. Wednesday, some spots of the Hokuriku region in central Japan could see up to 90 centimeters of snowfall, while there may be up to 80 cm of snow in the Tohoku region.

Winds could reach up to 126 kilometers per hour in areas across the country, the agency said. 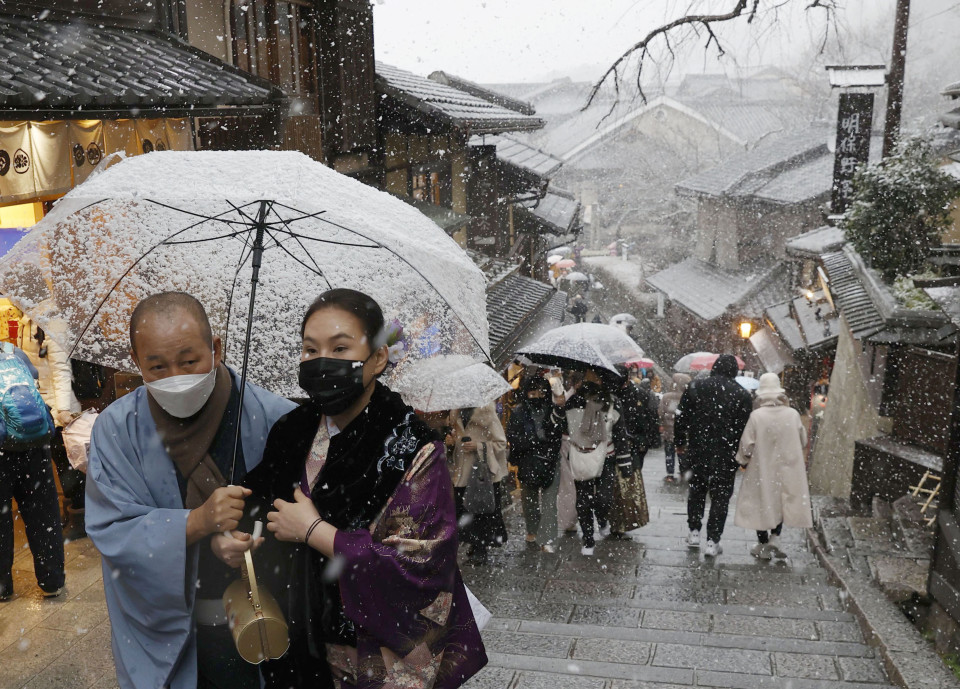 On Tuesday, snowfall was observed in central Tokyo for the first time this season, while Fukuoka and Kagoshima, both in the Kyushu region, also saw snowfall as temperatures dipped below zero.

JAL and ANA canceled more than 200 flights on Tuesday, impacting more than 8,000 people.

In western Japan, JR West's Sanyo Shinkansen service was suspended between Shin-Osaka and Okayama on Tuesday night due to a snow-related technical problem.

Snowfall topped 30 cm within three hours in Maniwa, Okayama Prefecture, logging a record in the city, while Otari, Nagano Prefecture, saw more than 40 cm of snow. 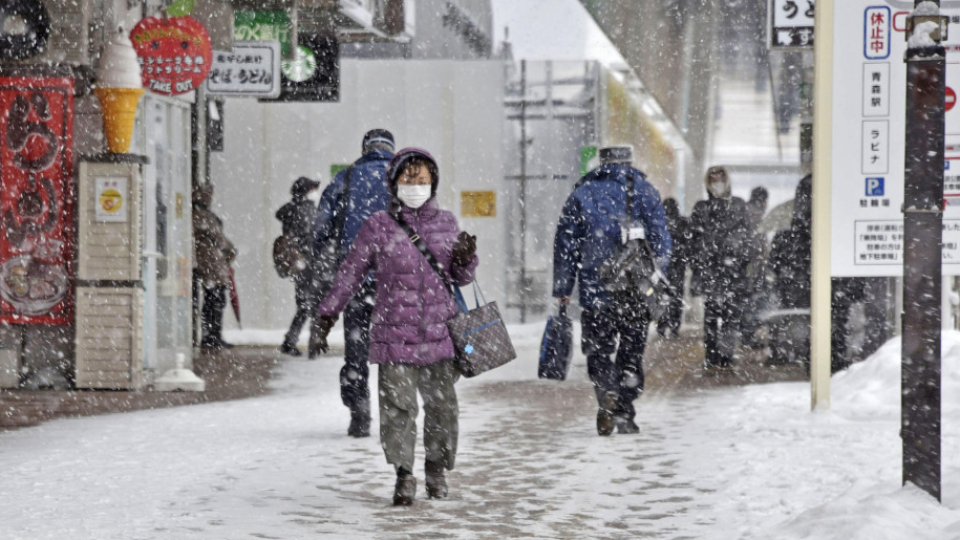 Commuters walk in the snow near Aomori Station in northeastern Japan on Jan. 24, 2023, as the country braces for heavy snowfall amid a once-in-a-decade cold snap. (Kyodo) ==Kyodo 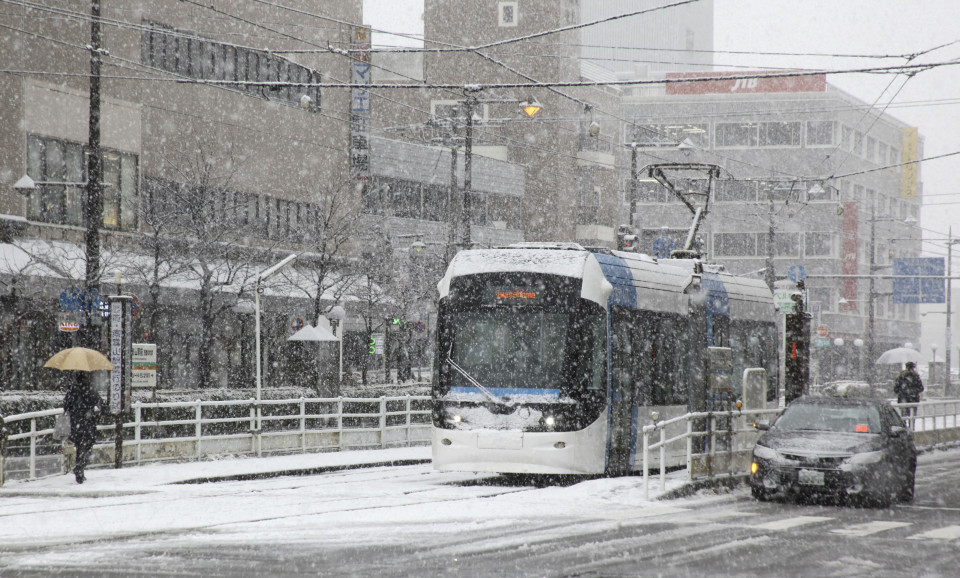 A streetcar runs in the snow in Toyama, central Japan, on Jan. 24, 2023, as Japan braces for heavy snowfall amid a once-in-a-decade cold snap. (Kyodo) ==Kyodo