Kishida agreed with his French, Italian, British, Canadian and U.S. counterparts that their nations will expand security ties after Tokyo made a major shift in its defense policy in December in the face of China's widening military presence in the Asia-Pacific.

With approval ratings for his Cabinet nearing what is widely seen as the "danger level" of 30 percent due to several scandals and gaffes by ministers, the premier's diplomatic activities may contribute to improving his popularity, observers said. 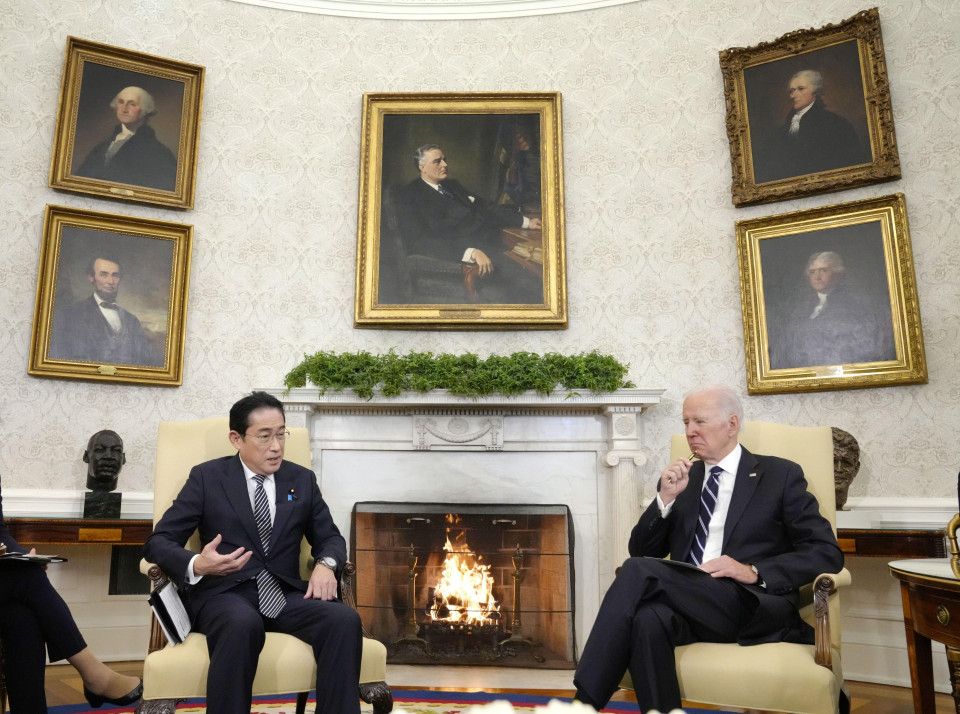 But some pundits say Kishida, a self-proclaimed dove, should not attempt to leverage the Taiwan issue to prop up his domestic fortunes, as any challenge to China in tandem with the G-7 will hurt Sino-Japanese relations, in turn destabilizing the regional security environment.

Beijing and self-ruled democratic Taipei have been governed separately since they split in 1949 as the result of a civil war.

Kishida and U.S. President Joe Biden confirmed that peace and stability across the Taiwan Strait is "an indispensable element of security and prosperity in the international community," according to a joint statement released after their summit in Washington on Friday.

China regards Taiwan as a renegade province that must be reunified with the mainland. President Xi Jinping, who secured an unprecedented third, five-year term as head of the ruling Communist Party in October, has not ruled out the use of force to bring the island under its control.

Beijing has lambasted Japan, the United States and other G-7 members for striving to build an "anti-China" alliance in Asia and establish an Asian version of NATO.

The G-7 allies have been also trying to reinforce economic cooperation to end reliance on China in the global supply chain, promoting the division of the world into two groups -- Western democratic countries and what they call autocratic nations.

Kishida, a veteran lawmaker representing a constituency in Hiroshima, is scheduled to host the G-7 summit to be held for three days from May 19 in the western Japan city devastated by a U.S. atomic bombing in August 1945. 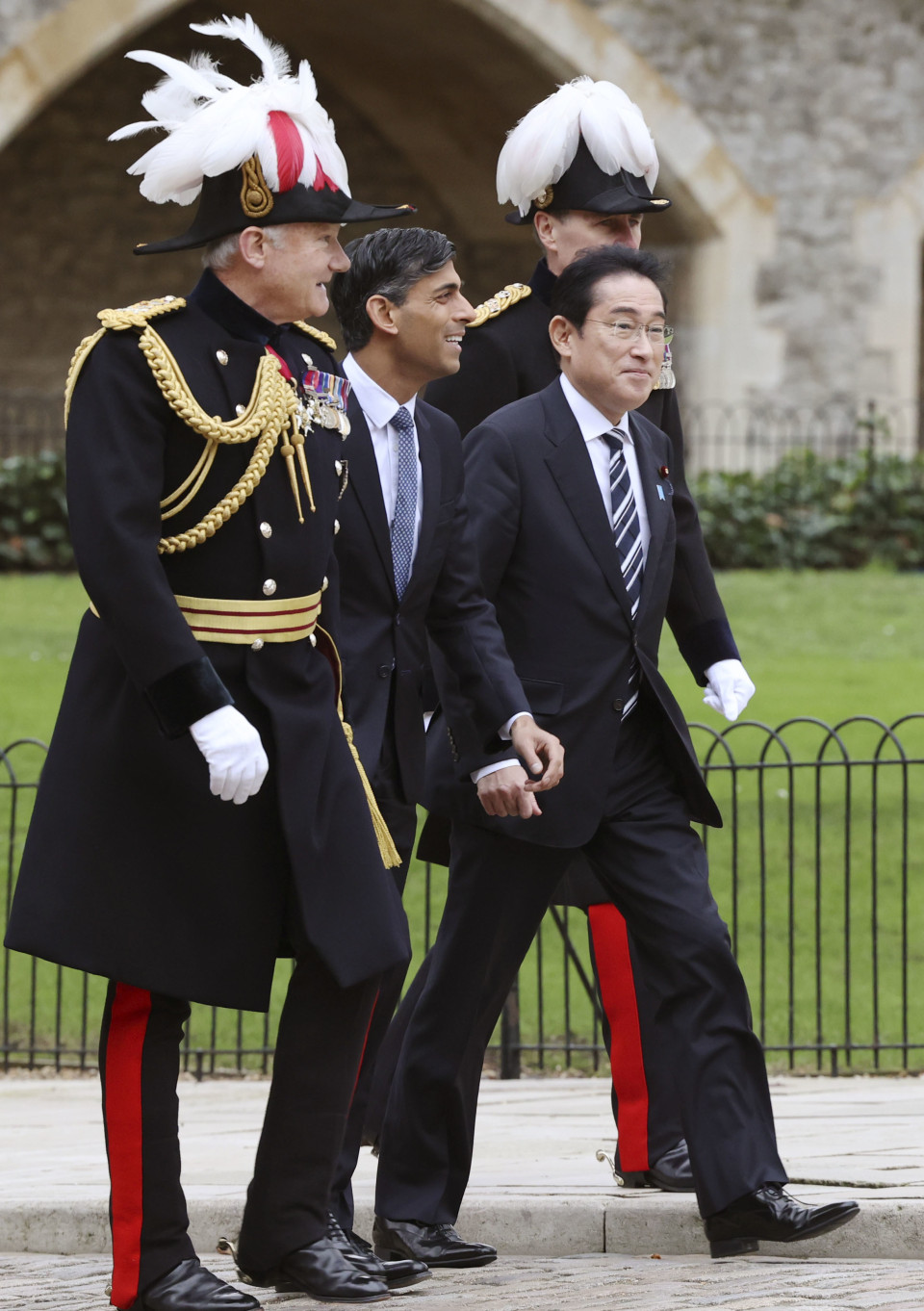 Japanese Prime Minister Fumio Kishida (R) is accompanied by his British counterpart Rishi Sunak (C) as he heads to a welcome event ahead of talks in London on Jan. 11, 2023. (Pool photo)(Kyodo) ==Kyodo

At the gathering, Kishida is set to pitch his vision of a world without nuclear weapons amid fears that Russia might use an atomic device against Ukraine in the ongoing war. He also will look to demonstrate the G7's commitment to rejecting any attempt to change the status quo by force.

In December, Japan pledged to obtain enemy base strike capabilities under the war-renouncing Constitution to deter attacks on its territory and almost double its annual defense spending to about 2 percent of gross domestic product over the next five years, on par with NATO members.

The decision came after China carried out large-scale military drills near Taiwan in early August in retaliation for the visit to the island by former U.S. House of Representatives Speaker Nancy Pelosi, the then third-highest-ranking official in the country.

Stephen Nagy, senior associate professor at International Christian University in Tokyo, said, "Japan continues to walk a fine line in terms of its economic relations with China and its serious security concerns," which have "only deepened" under Xi's rule.

Around four months before the summit in Hiroshima, Kishida's meeting with the G-7 leaders has strengthened Japan's reputation as a "security partner that shares similar concerns about China and the fate of Taiwan," Nagy said.

On the domestic political front, Nagy said, "Japanese leaders benefit from proactive foreign policy achievements as it is one of the only areas where the public can expect to see change."

"Enhanced security cooperation commitments, the international stage and Kishida being seen as a leader accepted by other G-7 leaders may give him a temporary boost in approval," he added.

In a survey by Kyodo News in December, the support rate for Kishida's Cabinet stood at 33.1 percent, the lowest level since he took office in October 2021, while it topped 60 percent shortly after his ruling party's victory in the upper house election in July.

Jeff Kingston, director of Asian Studies at Temple University Japan, said Japan's hosting of the G-7 summit this year would provide a window of opportunity for the nation to review its diplomatic strategy toward China.

"There are no signs that China is willing to make any significant concessions on key issues such as Taiwan and the disputed Senkaku Islands," administrated by Tokyo but claimed by Beijing, in the East China Sea, Kingston said. 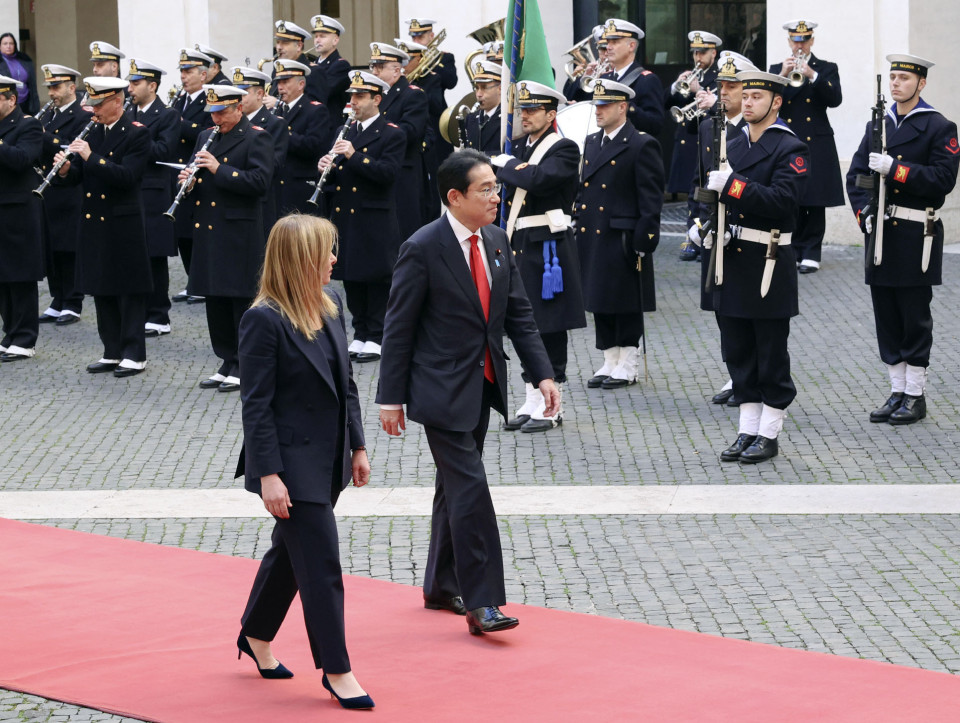 "Kishida has bolstered deterrence with his recent initiatives, so it might be a good time to hit the reset button on diplomacy. He may be irritating China but Beijing has also been provocative so diplomacy is necessary to dial down the recriminations," he added.

Other foreign experts, however, warn that in order to maintain peace and stability in the Asia-Pacific region, Kishida should refrain from meddling in the Taiwan issue unless Japan is prepared to take responsibility in case of a contingency surrounding the island.

Victor Teo, a former research fellow at the University of Cambridge, said Kishida's move is "unnerving" Beijing, as Xi might believe Japan is "actively trying to split Taiwan from China."

"If Japan has Taiwan's interests at heart, I think the best thing to do is work to mend ties with China and distance" itself from Taiwan, said the political scientist who specializes in international relations in the Indo-Pacific region.

"Giving Taiwan false hope that Tokyo would commit to help Taiwan at all costs in the event of a military incursion is actually not very responsible," he said.

As for Kishida, Teo also cast doubt on the prime minister's political maneuvering, touching on his abrupt proposal to raise taxes to finance an envisioned expansion of Japan's defense spending, which has already increased public distrust of his government.

The buildup of defense capabilities "requires money, and this extraction of funds from taxpayers is unlikely to make him more popular," he said.