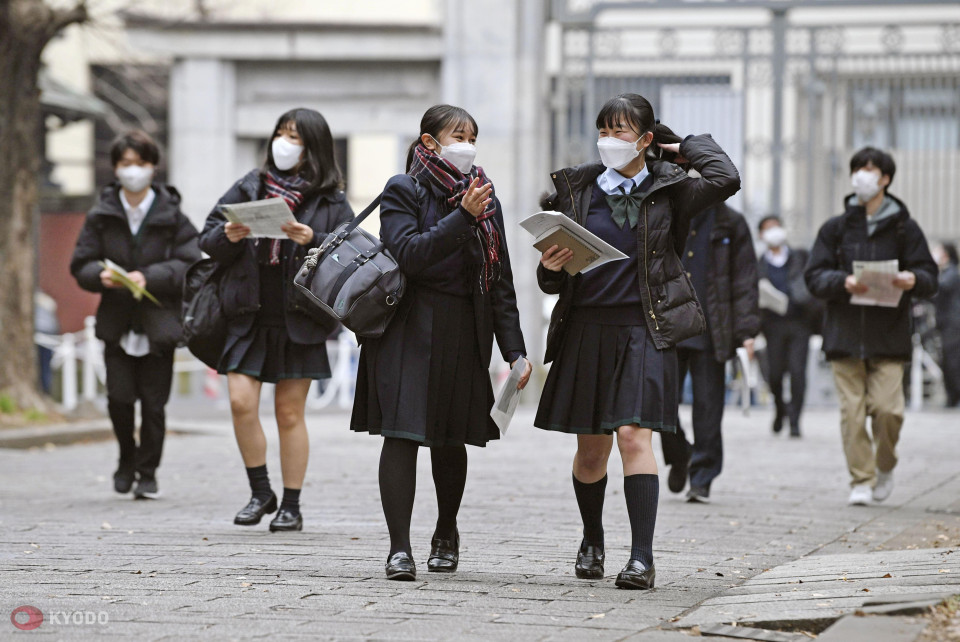 People walk to the venue of their entrance exams at the University of Tokyo on Jan. 14, 2023. Two-day unified university entrance exams started the same day across Japan, with thorough anti-COVID measures taken to protect 510,000 prospective students. (Kyodo) ==Kyodo 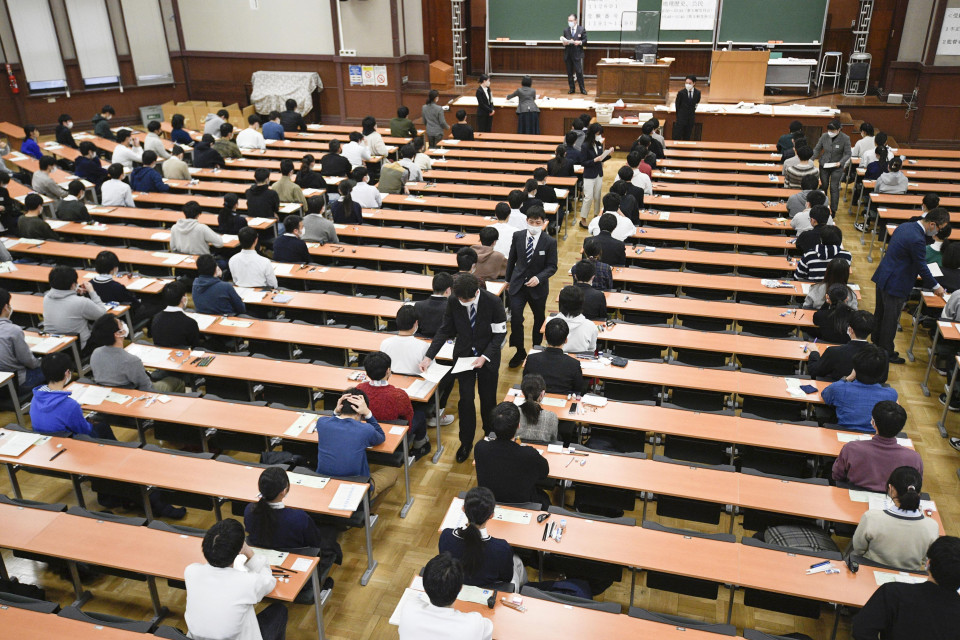 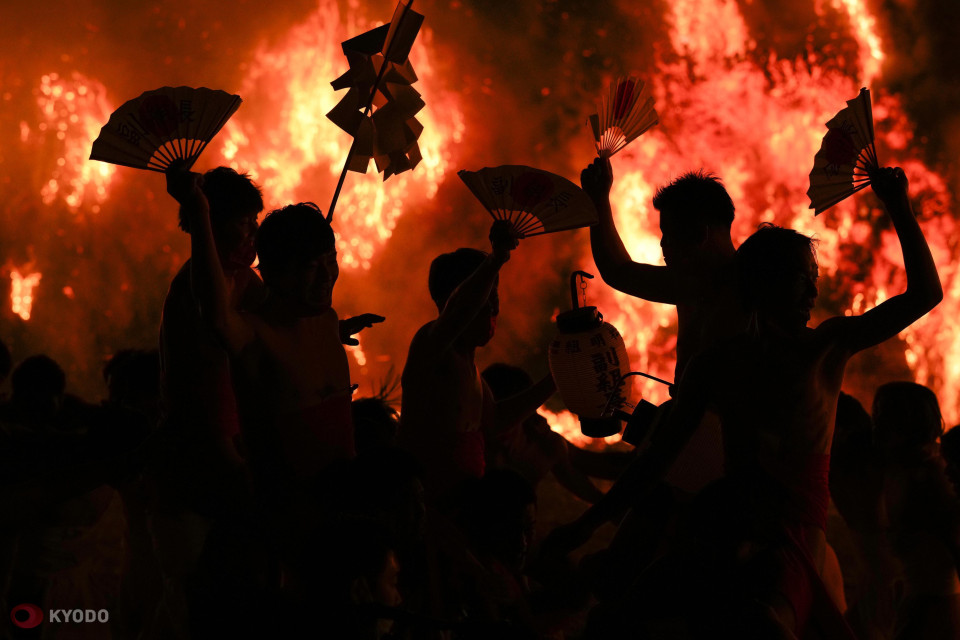 Men dance during a fire festival to pray for people's health at Katsube shrine in Moriyama in Shiga Prefecture, Japan, on Jan. 14, 2023. (Kyodo) ==Kyodo 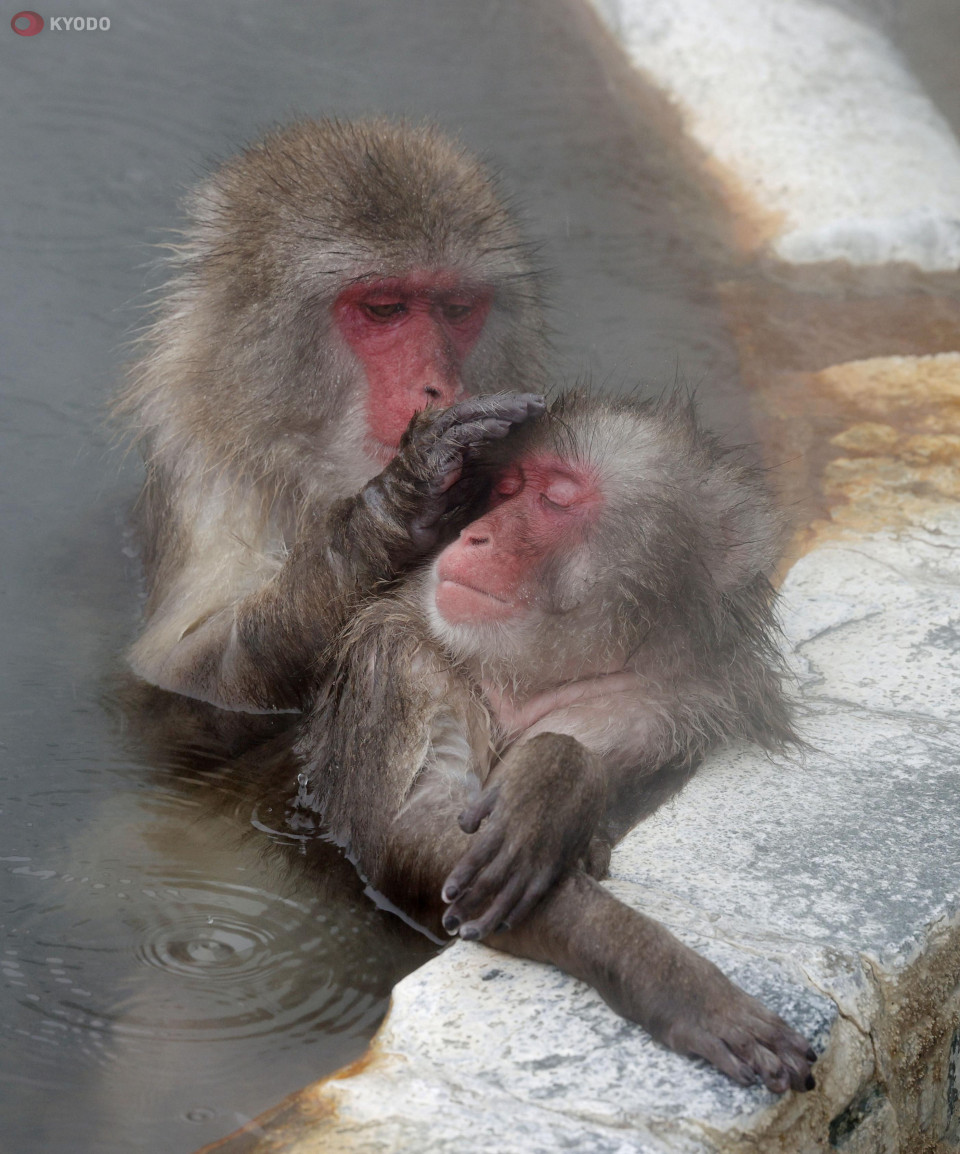 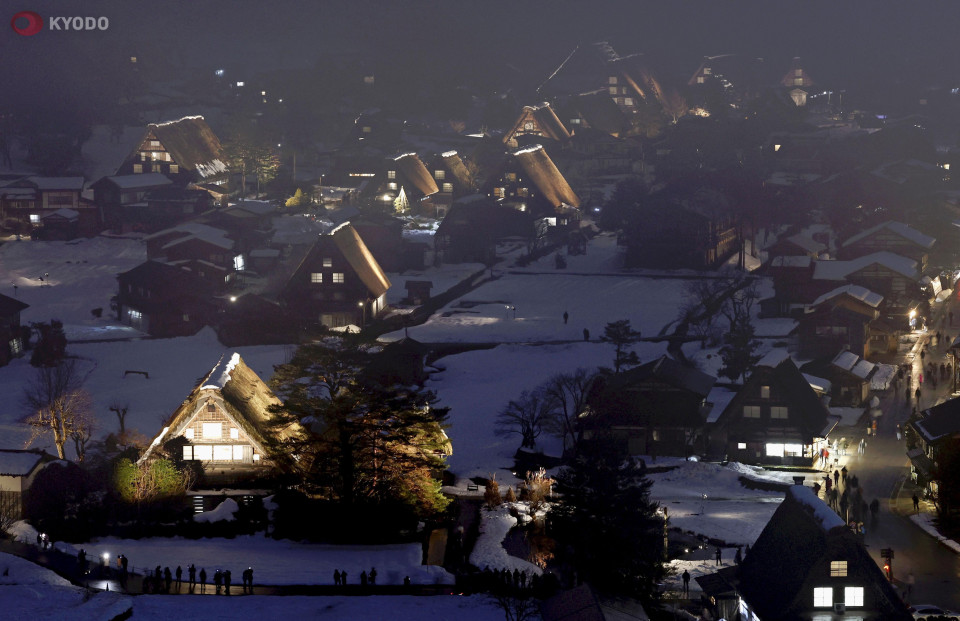 Thatched farmhouses in the hamlet of Shirakawa-go, a World Heritage site, are lit up within the Gifu Prefecture village of Shirakawa, central Japan, on Jan. 15, 2023. (Kyodo) ==Kyodo 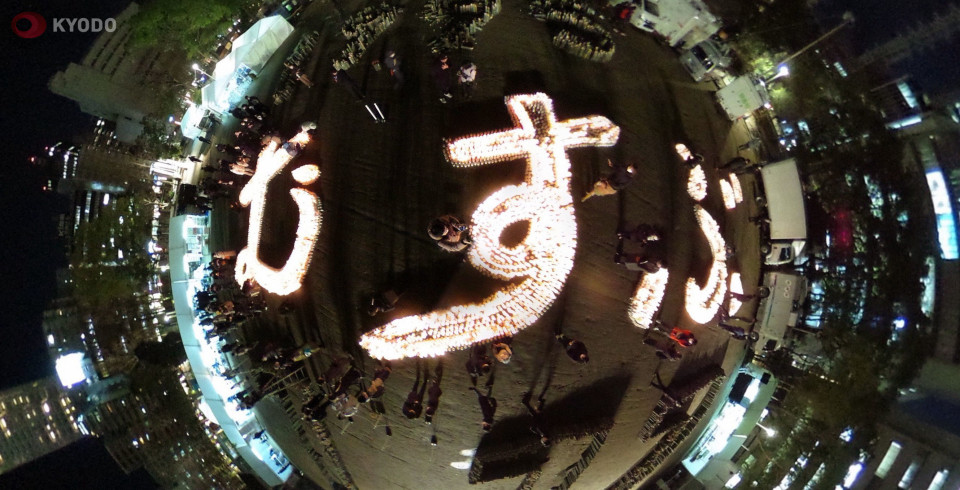 Photo taken with a 360-degree camera at a park in Kobe, Hyogo Prefecture, on Jan. 16, 2023, shows lanterns arranged to spell out the Japanese word "musubu" meaning "join" during an event marking the 28th anniversary of the Great Hanshin Earthquake that struck the western Japan city and its vicinity killing more than 6,000 people. (Kyodo) ==Kyodo 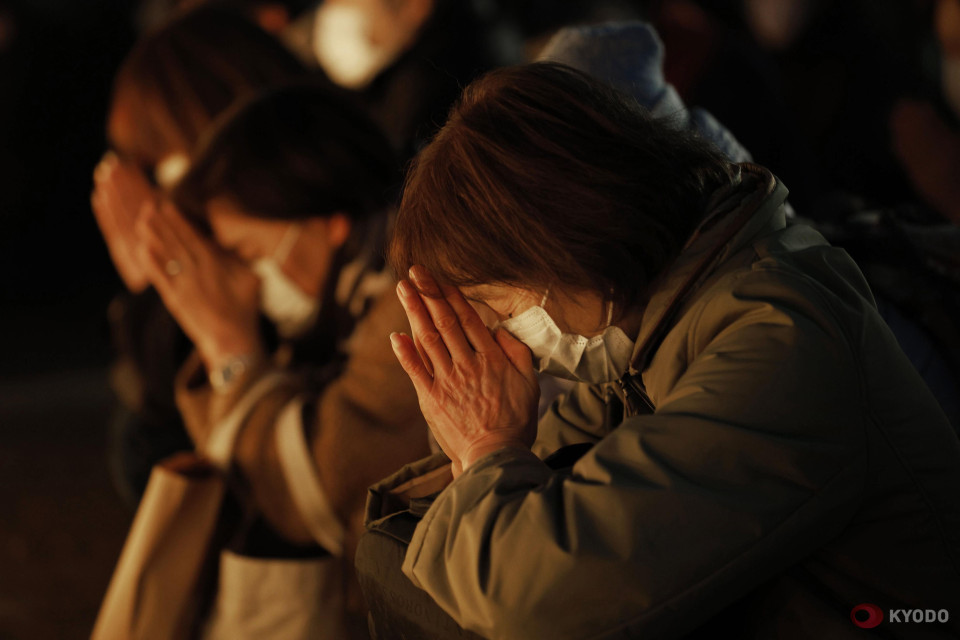 People pray at a park in Kobe, Hyogo Prefecture, on Jan. 17, 2023, the 28th anniversary of the 1995 Great Hanshin Earthquake, which struck the western Japan port city and its vicinity killing more than 6,000 people. (Kyodo) ==Kyodo 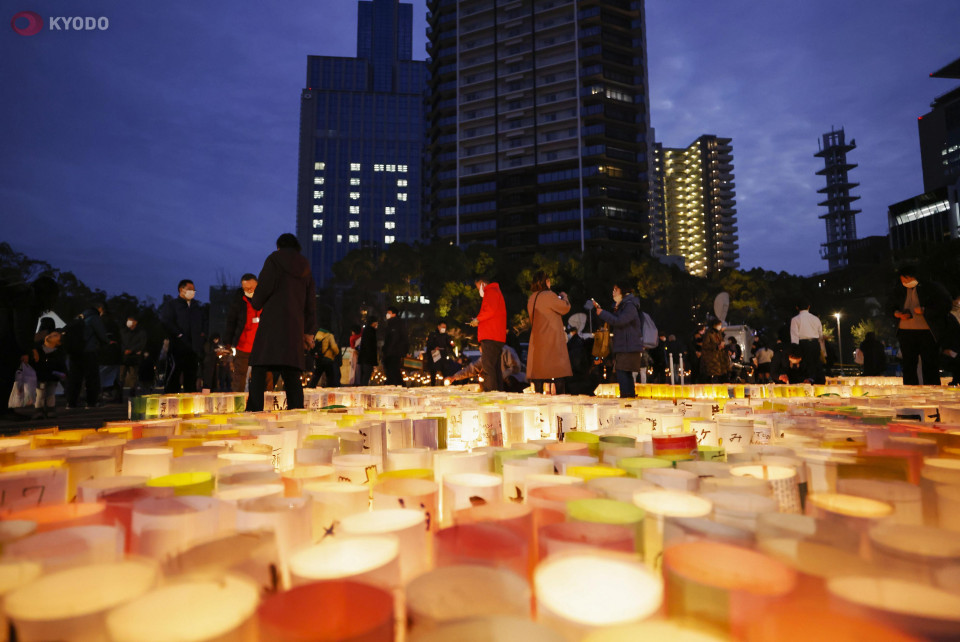 Lanterns are lit at a park in Kobe, Hyogo Prefecture, on Jan. 17, 2023, the 28th anniversary of the 1995 Great Hanshin Earthquake, which struck the western Japan port city and its vicinity killing more than 6,000 people. (Kyodo) ==Kyodo 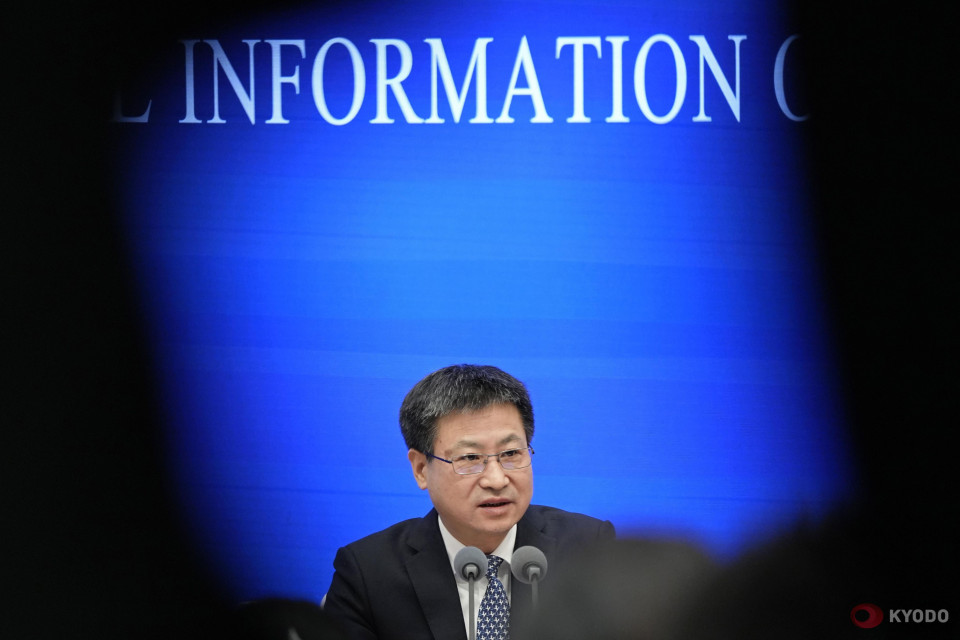 An official of China's National Bureau of Statistics attends a press conference in Beijing on Jan. 17, 2023, to release the country's population data. The population of mainland China reached 1,411.75 million by the end of 2022, down 850,000 from the previous year and marking the first contraction in 61 years. (Kyodo) ==Kyodo 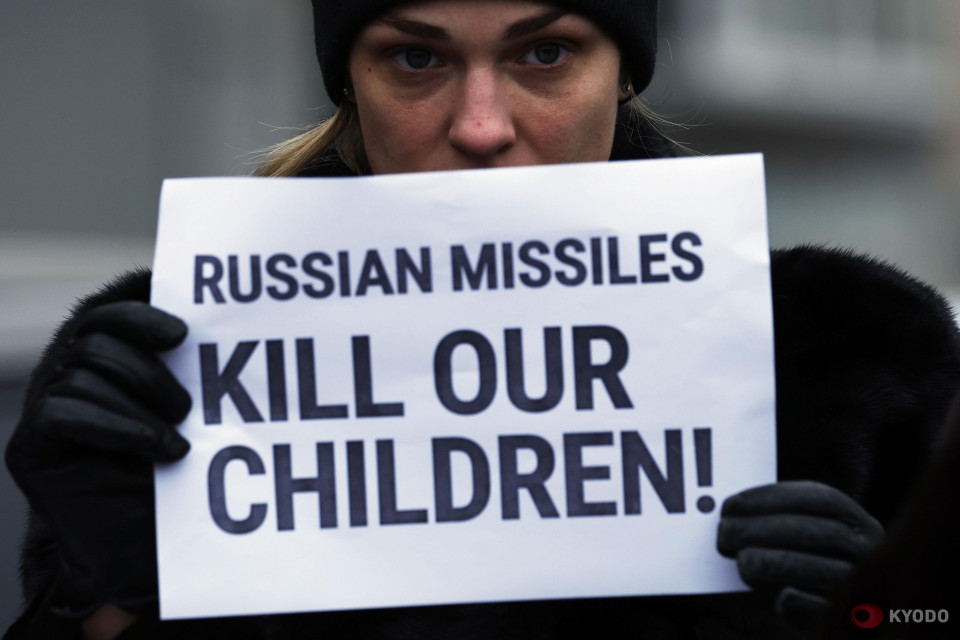 A woman protests against Russian missile attacks in Dnipro, on Jan. 17, 2023, three days after a deadly Russian missile strike on an apartment building in the eastern Ukraine city. (Kyodo) ==Kyodo 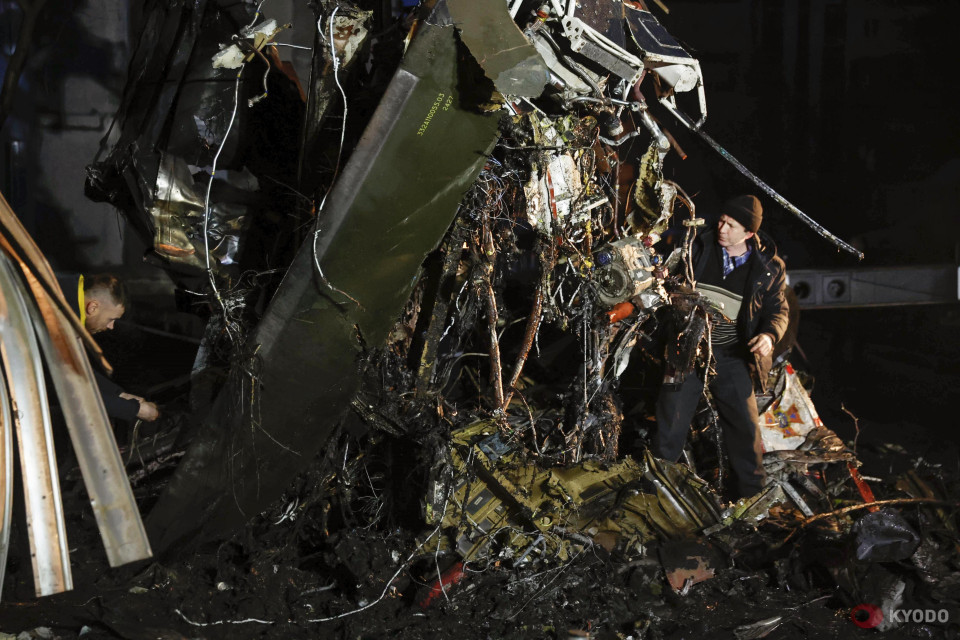 Workers clear part of the wreckage of a helicopter crash near a kindergarten in Brovary, outside the Ukrainian capital Kyiv, on Jan. 18, 2023. More than a dozen people, including the country's interior minister, were killed. (Kyodo) ==Kyodo 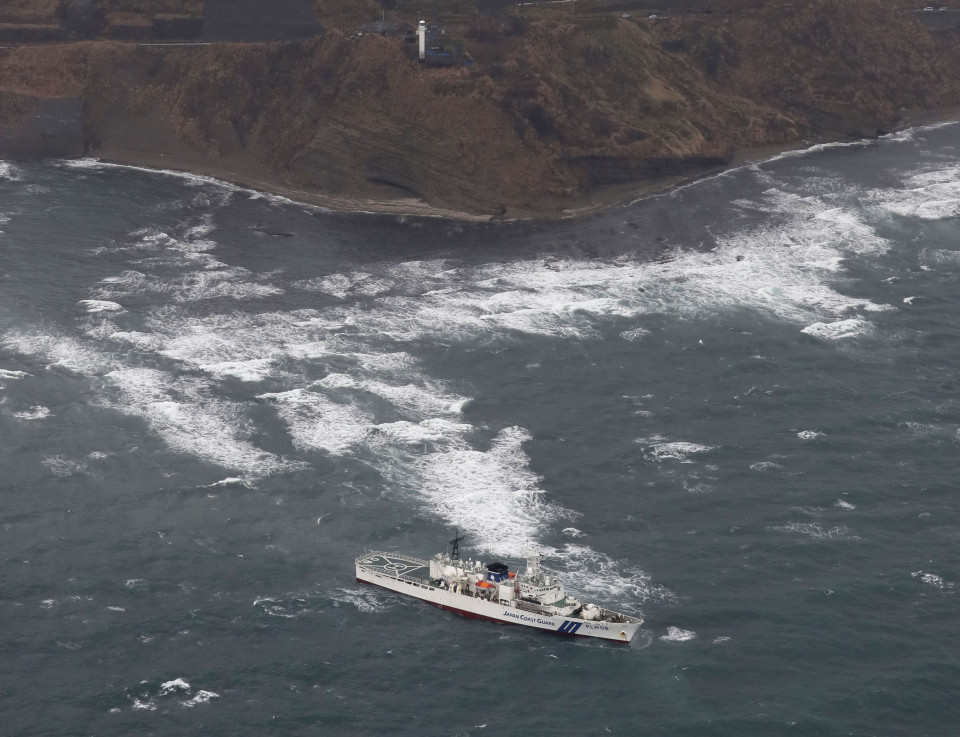 Photo taken from a Kyodo News airplane on Jan. 18, 2023, shows the Niigata Coast Guard Office patrol boat Echigo off Kashiwazaki in Niigata Prefecture, northwest of Tokyo. The 3,100-ton vessel was leaking oil after running aground during a patrol. (Kyodo) ==Kyodo 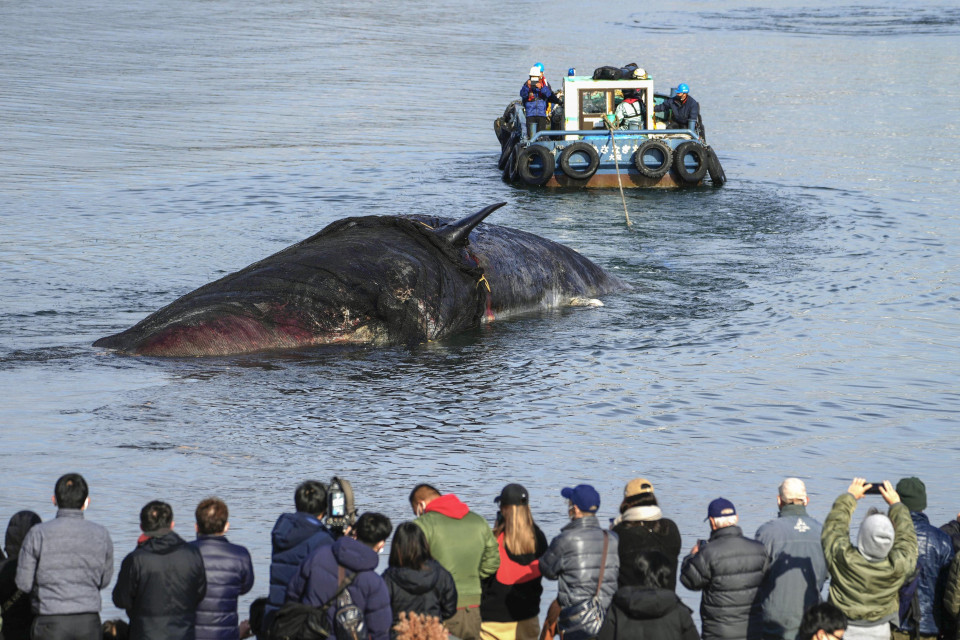 Port authorities use a boat to tow a dead sperm whale back out to sea in Osaka in western Japan on Jan. 18, 2023. The stray whale was first spotted on Jan. 9 in Osaka's Yodo River and confirmed dead later in the week. (Kyodo) ==Kyodo

Photo taken from a Kyodo News helicopter on Jan. 19, 2023, shows a dead whale being sent down to the sea floor with 30-ton concrete blocks from a vessel off the Kii Peninsula, western Japan. The 15-meter-long male sperm whale, which was first sighted on Jan. 9 near the mouth of the Yodo River in Osaka, became progressively weaker and was confirmed dead four days later. (Kyodo) ==Kyodo 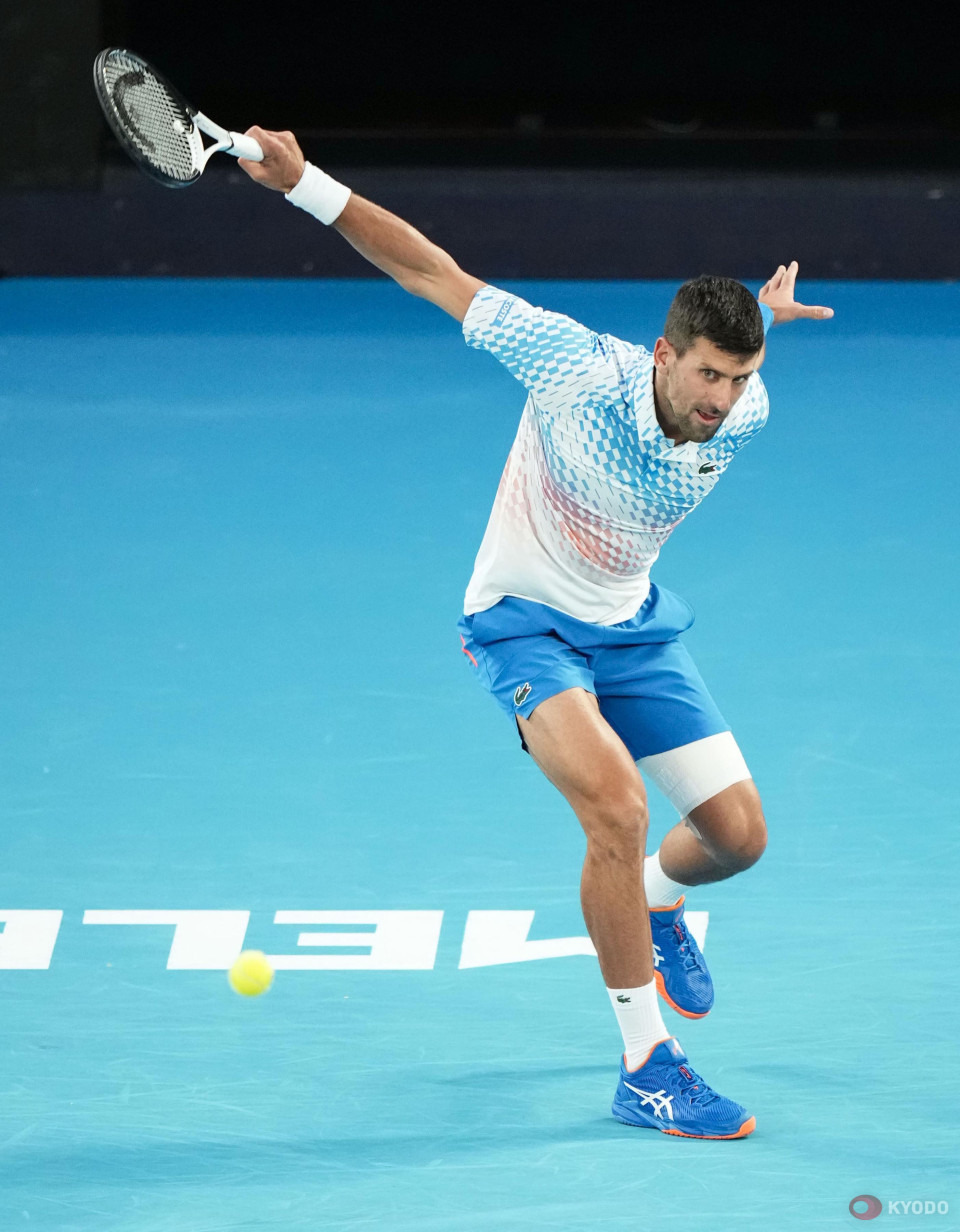 Serbia's Novak Djokovic plays against France's Enzo Couacaud in the second round of the men's singles at the Australian Open tennis tournament in Melbourne on Jan. 19, 2023. (Kyodo) ==Kyodo 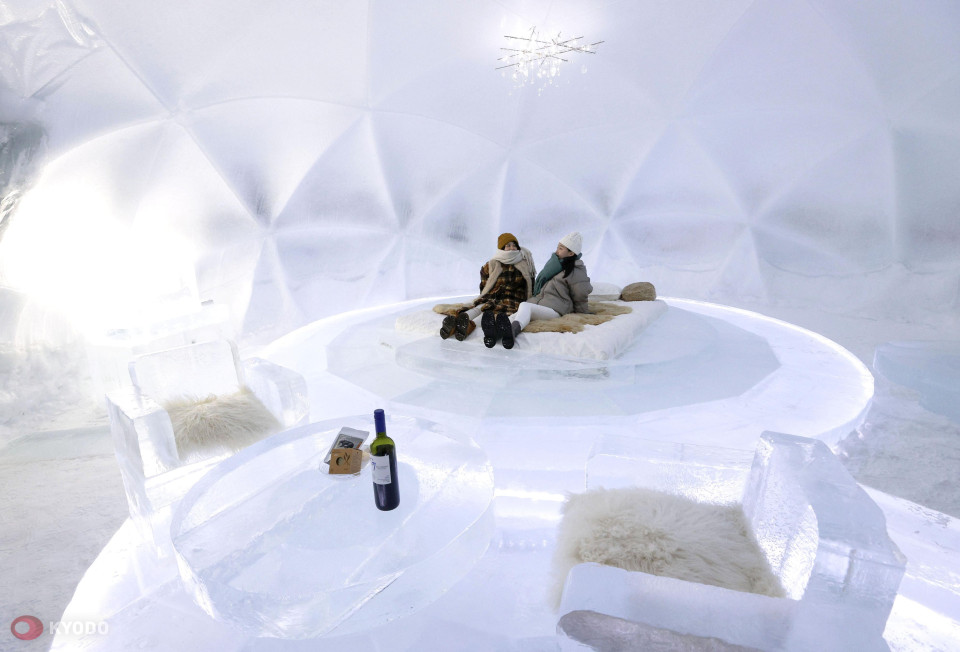 Photo taken on Jan. 19, 2023, in Shimukappu, a village in northern Japan known for its cold temperatures that can fall as low as 30 C below zero, shows the inside of a dome-shaped hotel where the ceiling, walls, and furnishings such as beds and tables are all made of ice. Guests of the hotel, unveiled to the media a day before its public opening at Hoshino Resorts Tomamu, can spend the night in sleeping bags inside the dome that is 3.5 meters high and 8.5 meters wide. (Kyodo) ==Kyodo 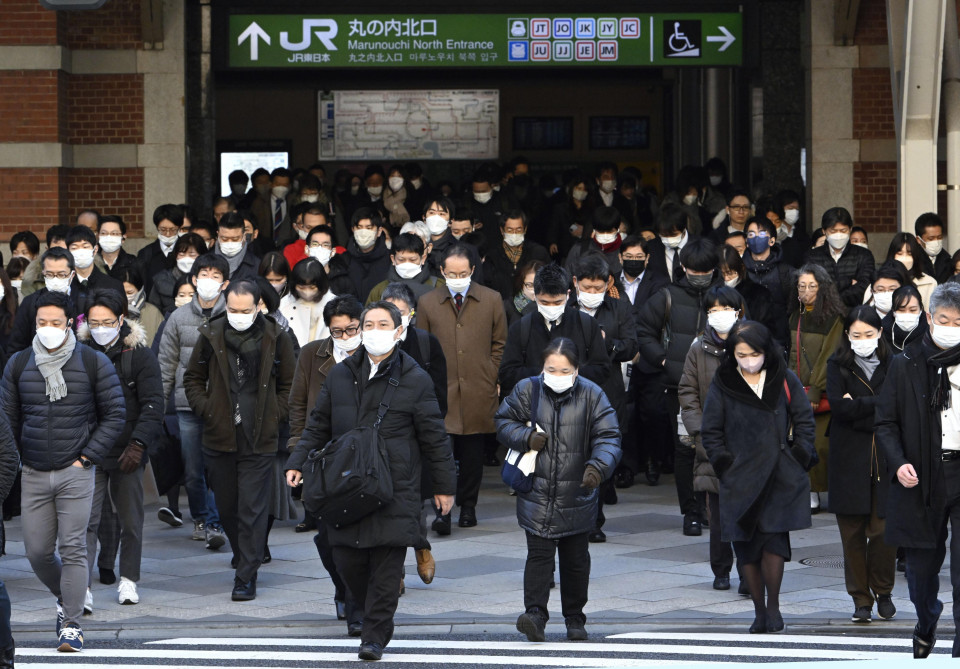 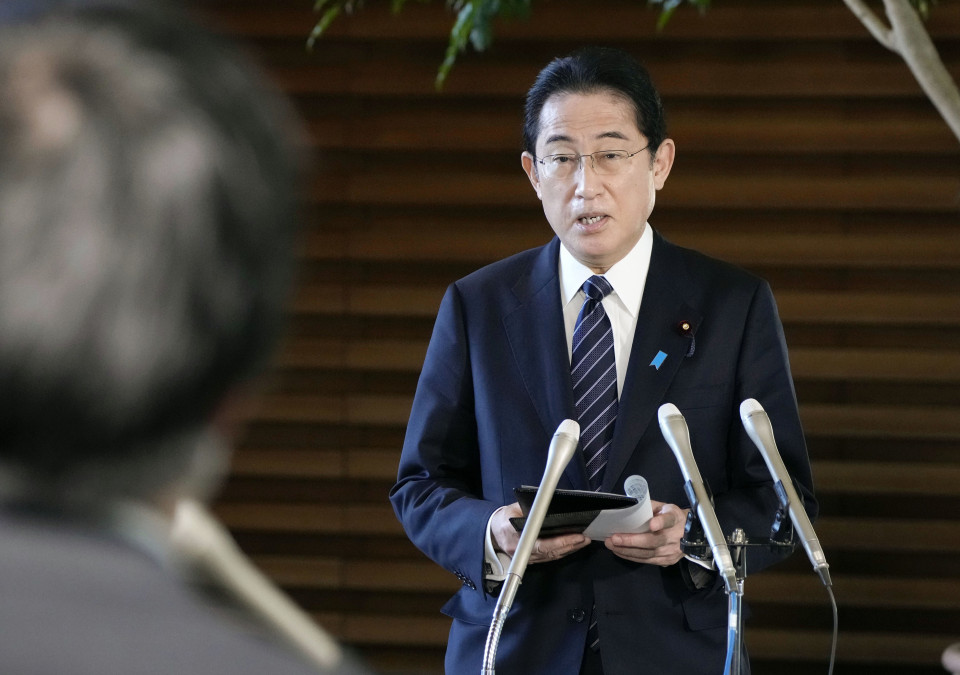 Japanese Prime Minister Fumio Kishida speaks to reporters at his office in Tokyo on Jan. 20, 2023. Kishida said he has instructed health ministry experts to promote discussions on a possible downgrade of the legal status of the novel coronavirus to the same level as seasonal influenza this spring. (Kyodo) 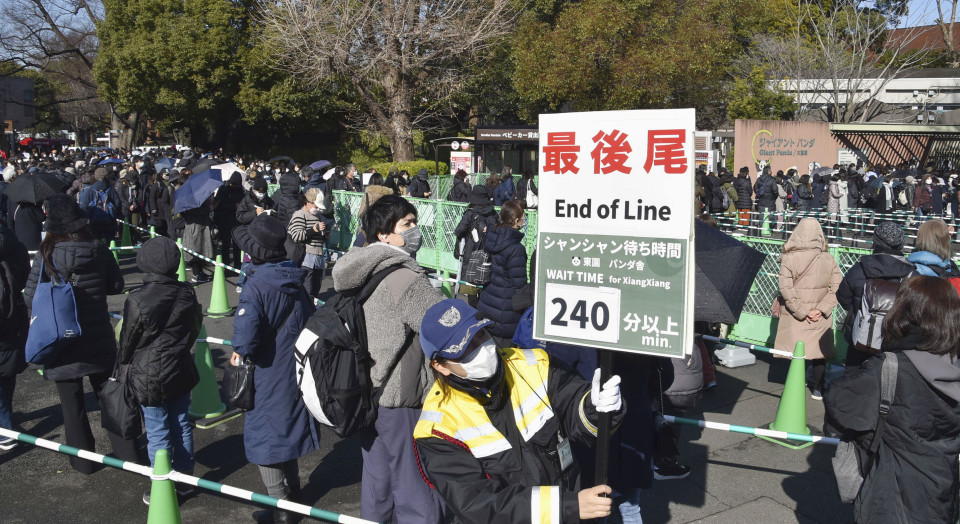 Visitors form a long queue inside Tokyo's Ueno Zoological Gardens on Jan. 20, 2023, to catch a glimpse of popular female giant panda Xiang Xiang. A signboard at the end of the line shows an estimated waiting time of 240 minutes. (Kyodo)