In the eyes of Japanese consumers, the Bank of Japan, the guardian of price stability, may look out of touch with the reality they face in everyday life. 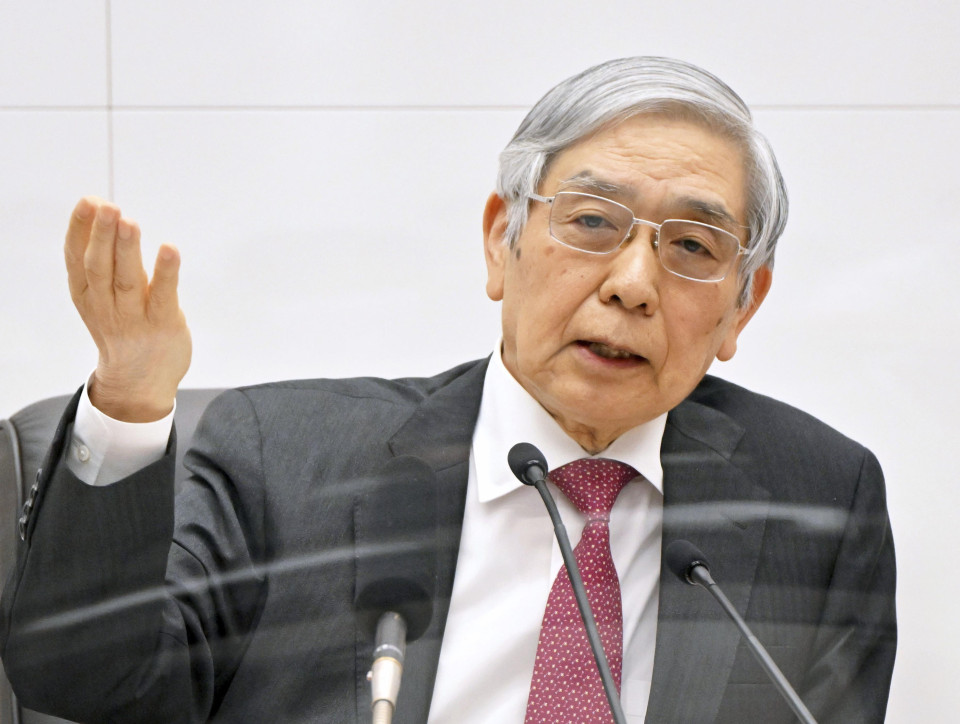 Bank of Japan Governor Haruhiko Kuroda holds a press conference at the BOJ's headquarters in Tokyo on Jan. 18, 2023, after the central bank decided at a two-day policy meeting to maintain its ultralow rate policy. (Kyodo)

The BOJ says it remains committed to its massive stimulus until inflation reaches its 2 percent goal. The current pace of price increases signals the central bank could phase out its easing policy, just as other central banks are raising interest rates to fight inflation.

The BOJ defied market pressure to tweak its ultralow interest rate policy at its policy meeting in January and Governor Haruhiko Kuroda reckons the 2 percent target has yet to be achieved in a true sense. The bank wants inflation to attain the goal in a stable fashion.

After the BOJ surprised financial markets with its abrupt decision in December to raise its ceiling on long-term government bond yields, expectations of a policy shift will likely continue, all the more so as the Japanese central bank will have a new governor succeeding Kuroda in April.

Last year, energy and raw material prices surged in the midst of Russia's war against Ukraine and the yen's plunge in the currency market magnified the impact, pushing up the consumer price index, the key gauge of inflation.

Economists say a repeat of 2022 is unlikely. But consumer prices will likely remain elevated in early 2023 as companies do not yet feel fully able to pass on rapidly increasing costs and the BOJ may come under renewed pressure to do something about it.

"It is natural that the two perceptions grow far apart in a crisis situation, when consumers want immediate changes and the central bank needs to keep future growth in mind. This is why communication is very important in central bank policy," Martin Schulz, chief economist at Fujitsu Ltd., said.

Some 94 percent of consumers in a recent BOJ survey said they feel prices have risen from a year ago, while 85 percent expect them to increase in the year ahead.

Annual wage negotiations between management and labor unions this spring will come into greater focus as Prime Minister Fumio Kishida is calling for pay hikes that outpace the rate of inflation.

Major companies are forecast to offer pay rises of 2.85 percent on average in the negotiations, according to a poll of 33 economists conducted by the Japan Center for Economic Research.

"Our hope is that wages will start to rise. That could make the 2 percent inflation target met in a stable and sustainable manner, but we have to wait for some time," Kuroda told this year's World Economic Forum in Davos, Switzerland, making his case for the current "extremely accommodative" monetary policy. 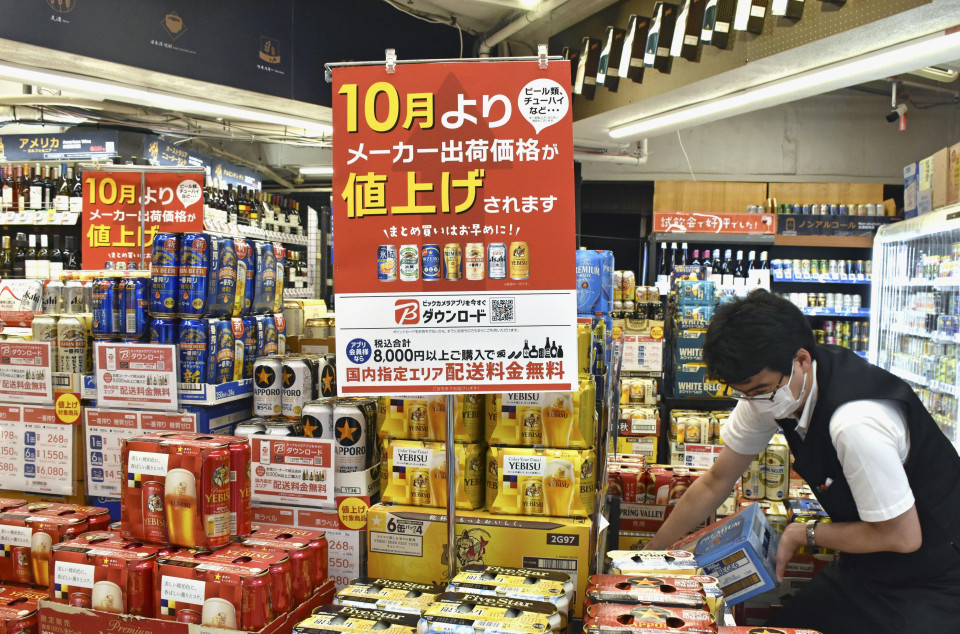 File photo taken in September 2022 shows beer and other canned alcoholic drinks sold at a store in Tokyo, with posters notifying customers of price hikes the following month. (Kyodo)

A decade ago, the government and the BOJ reached an accord under which the central bank committed itself to achieving the 2 percent target "at the earliest possible time." Kuroda has called the target a "global standard," also adopted by other central banks like the U.S. Federal Reserve.

But its public recognition remains low, with 41 percent in the BOJ survey saying they were unaware of the target. Government sources said earlier that the decade-old accord will likely be revised under a new governor.

When the joint accord was reached in January 2013, Japan's core CPI had declined 0.2 percent. The index only rose 0.4 percent that year from 2012. Core CPI excludes the prices of volatile fresh food items.

The situation for Japan was unique in that it had to fire up inflation, not rein it in.

The key gauge of inflation has now remained above the BOJ's target for nine straight months, largely due to rising import prices.

The BOJ still expects the trend not to last long and sees a "virtuous cycle" of price hikes and wage growth as missing. Core CPI is projected to undershoot its target in the next two fiscal years.

"The possibility is low that YCC (yield curve control) will be abolished while Kuroda remains as governor," said Shotaro Kugo, senior economist at Daiwa Institute of Research, adding that much depends on who succeeds him as BOJ chief.

Under its yield curve control program, the BOJ sets short-term interest rates at minus 0.1 percent and guides 10-year Japanese government bond yields to around zero percent, but it expanded the narrow trading band for the benchmark 10-year yield to minus 0.5 percent and 0.5 percent last month. Financial markets took the policy tweak as a first step toward an exit from the bank's massive stimulus.

"While inflationary pressures from higher commodity prices and the weaker yen have been confirmed... strengthening domestic demand is also pushing up prices to a certain degree," Kugo said. Price hikes, which have largely been focused on goods, should further spread to services for the BOJ's target to be attained, he said.

Pent-up demand from the COVID era has been emerging in recent months. Japan's output gap, which has been negative, is expected to turn positive, meaning there will be more demand than supply, a positive sign for the price outlook.

Takahide Kiuchi, executive economist at Nomura Research Institute, projects the increase in core CPI will remain above the BOJ's target in fiscal 2023 but will slow to 0.7 percent in fiscal 2024, compared with the BOJ's most recent projection of 1.8 percent.

"Expectations will wane later this year that a virtuous cycle of wages and prices will appear," Kiuchi, a former BOJ board member said. "The BOJ would have to modify its 2 percent target if it wants to normalize its monetary policy. Redefining it as a medium- to long-term target would be among the options."