The central Japan town of Eiheiji, known for its ancient Zen Buddhist temple in Fukui Prefecture, is set to be the first place in the country to adopt a new type of autonomous self-driving vehicle, hoping to pioneer investment in what could become an important future technology.

According to the transport ministry, "level-4" self-driving autonomous vehicles are slated to begin operating in the town from fiscal 2023 starting April, the first time authorities in Japan will give the go-ahead for such a project. 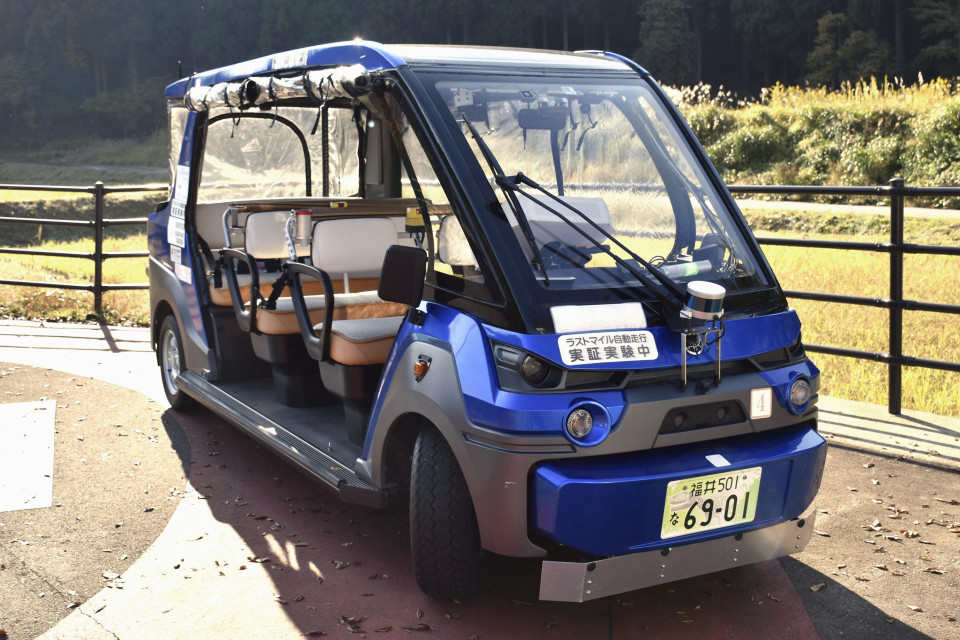 A "level-4" self-driving vehicle is shown in Eiheiji, Fukui Prefecture, in November 2022. (Kyodo)

Autonomous vehicles are expected to become an essential means of transportation in regions of the country where public transport is becoming increasingly scarce. The town, which considers itself at the forefront of offering solutions, will aim to identify and solve operational issues for the widespread adoption of driverless technology.

Self-driving automobiles in Japan are categorized from levels 1 to 5 with increasing levels of capability. Since March 2021, Eiheiji has been utilizing level-3 public transportation, meaning the vehicles can drive autonomously in specific areas largely without human assistance, except in emergency situations. Level-4 vehicles, such as those slated to begin operations in April, are fully able to conduct driving tasks without human intervention on designated routes.

The three level-3 self-driving vehicles currently operating in the village transport passengers along a road using electromagnetic induction wires embedded in a 6-kilometer promenade at a speed of 12km per hour. Their routes extend to the front gate of Eiheiji's temple, considered a key feature of the town.

Equipped with cameras and sensors that use artificial intelligence, these level-3 autonomous vehicles can recognize their surroundings. If a person or object is in their path, they slow down or stop and let pedestrians know they are approaching with a verbal warning. When reaching the end of their route, they automatically make a U-turn and come to a halt.

The town responded to a central government initiative encouraging areas of Japan to trial self-driving vehicles in 2016, hoping to use them as a safer means of transporting locals. It was thought they may be useful for elderly residents, who are more likely to get into traffic accidents due to advanced age.

Eiheiji has joined hands with the National Institute of Advanced Industrial Science and Technology (AIST), a public research organization in Japan.

The town started conducting field tests in 2018. Initially, a human operator drove the vehicles but in March 2021, driverless driving began on a 2-kilometer road separated from normal traffic, achieving Japan's first regular operation of level-3 self-driving vehicles. No accidents have occurred so far and the transport system has gained the trust of locals. 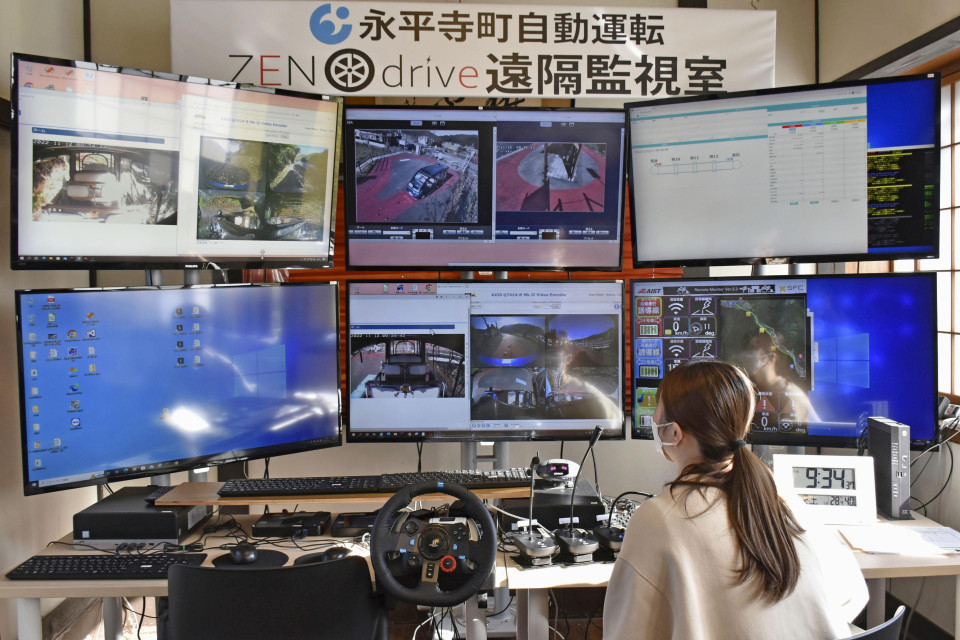 A remote monitoring room for self-driving vehicles is shown in Eiheiji, Fukui Prefecture, in November 2022. (Kyodo).

In April, the central government will permit level-4 autonomous driving under certain conditions, such as designated routes and remote monitoring. As the vehicles will operate themselves, the cameras and communication equipment they use need to be further enhanced to ensure their safety.

The government has set a target of launching level-4 automated transit services in more than 40 areas nationwide by fiscal 2025.

Anticipating that other regions will also want to adopt similar transport systems, Eiheiji plans to develop its own self-driving vehicles with an eye to mass production in the future, and compile information on their use so that its model can be adopted elsewhere.

"We will be able to estimate the necessary costs as well," an official in charge said.

There are, however, several issues that will need to be addressed if other towns wish to adopt the technology, according to Machidukuri Zen Connect Inc., a joint public-private venture operating the autonomous driving vehicles. 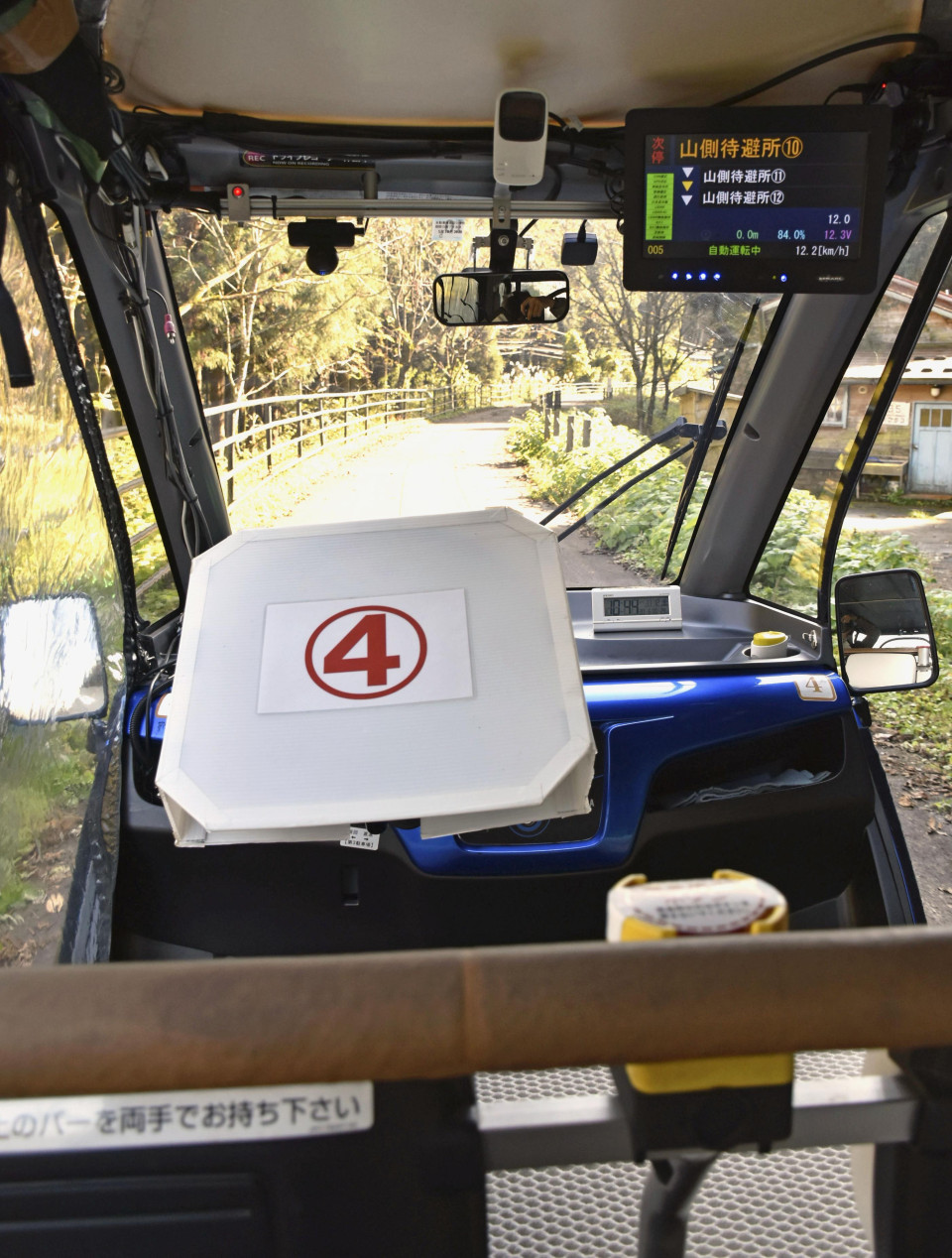 The inside of a "level-4" self-driving vehicle is shown in Eiheiji, Fukui Prefecture, in November 2022. (Kyodo)

The town office cannot continue the service if AIST stops covering vehicle maintenance and communication expenses, said Norifumi Hiramoto, from Zen Connect. "Though we want to remain one of the 40 designated areas, it will be difficult without support from the government," he said.

Other challenges lie ahead. To use the town's self-driving vehicles on regular roads, additional technological requirements are needed to respond to the movements of cars and motorcycles.

The vehicles are now operating on Saturdays, Sundays and holidays in the current fiscal year. While fares for the level-3 vehicles only cost 100 yen for an adult and 50 yen for a child, so far, users have mainly been tourists. The self-driving vehicles will also not operate during January and February.

"This is an important technology for solving society's problems. We will strive to have its usefulness widely recognized," Shin Kato, senior researcher at AIST, said.