Japan's parliament convened for a 150-day ordinary session on Monday, with Prime Minister Fumio Kishida's government set to be grilled over possible tax hikes that would cover a planned expansion of defense spending and policies related to raising children.

In the regular Diet session through June 21, ruling and opposition parties are also expected to clash over the budget for the next fiscal year starting in April alongside other key bills, including one regarding nuclear reactors.

During the session, a spate of local elections is scheduled to be held in spring, while Japan is also slated to host the Group of Seven summit in May in Kishida's constituency of Hiroshima, a western Japan city devastated by a U.S. atomic bomb in August 1945.

Kishida will take questions from representatives of each party from Wednesday after delivering a policy speech on the opening day of the latest parliamentary session.

On Monday, Kishida made the address without wearing a protective face mask, as his government has begun easing restrictions to prevent the spread of the novel coronavirus, moving toward normalizing social and economic activities in Japan. 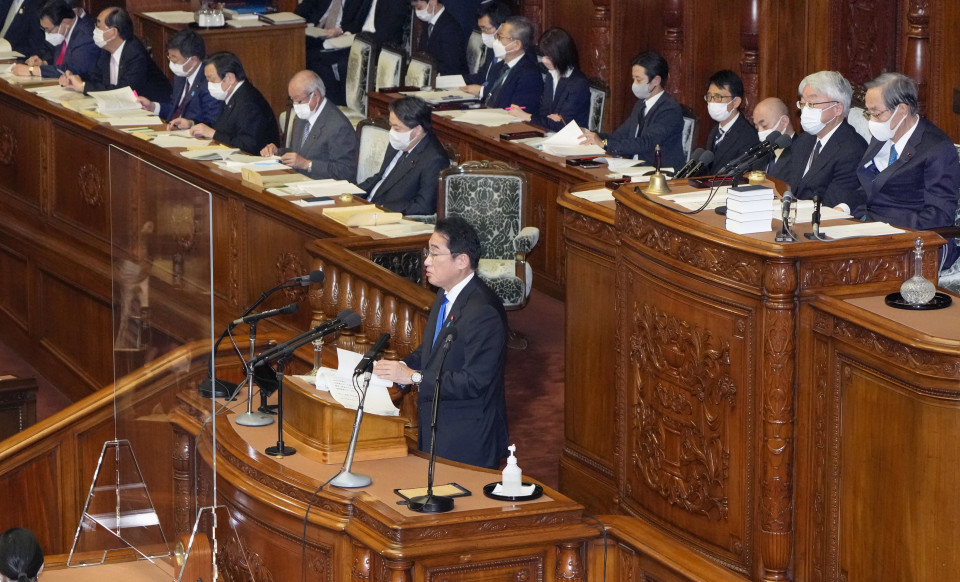 Last week, the ruling and opposition camps agreed to relax rules on masks at the parliament, imposed since April 2020. Participants other than speakers will continue to be requested to wear masks, lawmakers said.

During the Diet session, the Kishida administration, which was launched in October 2021, and the ruling bloc led by the Liberal Democratic Party will aim to pass the fiscal 2023 budget by the end of March, the lawmakers said.

The government intends to submit 60 bills, including one that will seek to secure funds to achieve its goal of boosting the country's annual defense spending to around 2 percent of gross domestic product over the next five years, on par with NATO members, they added.

In December, Japan decided to almost double its defense spending by the end of March 2028 and to acquire defensive enemy base strike capabilities amid mounting military threats from neighbors such as China and North Korea.

Many of Japan's opposition parties, however, have banded together in opposition to Kishida's abrupt proposal of raising taxes to finance an increase in defense spending, hoping to leverage public discontent and challenge the move.

Kishida, meanwhile, promised in his New Year press conference to focus on policies related to child-rearing in 2023, although it remains to be seen how the administration would cover the costs of implementing the proposed measures.

Other significant bills to be discussed during the regular parliamentary session will include allowing aging nuclear reactors to operate beyond their current 60-year lifespan, government sources said, despite public concerns over safety.