China's 2022 GDP growth among worst in decades on COVID impact

China's economy in 2022 expanded 3.0 percent from a year earlier, with the pace being one of the slowest in several decades, due to the nation's stringent "zero-COVID" policy and a subsequent explosion of infections later in the year, government data showed Tuesday.

The world's second-largest economy decelerated significantly from an 8.4 percent expansion in 2021 and failed to achieve its growth target of around 5.5 percent for 2022. In 2020, China saw its gross domestic product increase only 2.2 percent amid the initial shock of the COVID-19 pandemic.

The 3.0 percent GDP growth was the second lowest annual expansion since the Asian economy contracted in 1976, the final year of the decade-long Cultural Revolution initiated by Mao Zedong that historians say killed tens of millions of people.

In the fourth quarter of 2022, China's GDP growth slowed to 2.9 percent on the year from 3.9 percent in the previous three-month period as a major easing of the strict antivirus measures in December triggered widespread COVID-19 infections across the country.

On a quarter-to-quarter basis, China's GDP in the October-December period was unchanged from the previous three months.

In the April-June period, the country's GDP increased by just 0.4 percent on year and contracted 2.4 percent on quarter due to a two-month lockdown in Shanghai, the country's commercial and financial hub with a population of 25 million, through late May.

The draconian antivirus steps involving lockdowns had stifled economic activities, as they restricted people's movements and disrupted supply chains. The Asian country's economy has also been overshadowed by a weakening property sector.

The National Bureau of Statistics said the country has produced "positive results" in effectively tackling the pandemic and ensuring economic development. 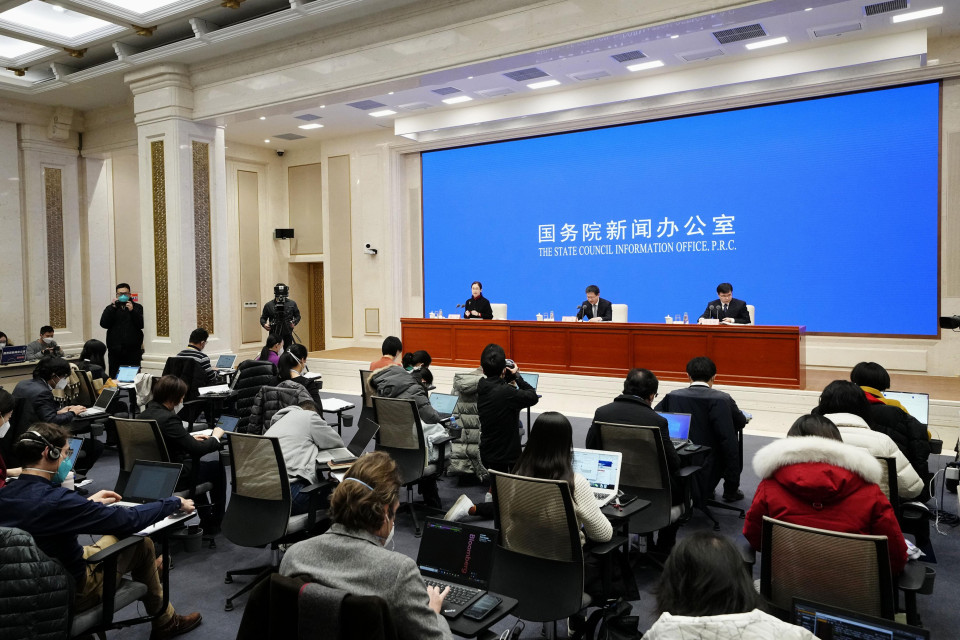 Officials of China's National Bureau of Statistics hold a press conference in Beijing on Jan. 17, 2023. (Kyodo)

But it warned the foundation of domestic economic recovery is "not solid" as the international situation is still complicated and severe, while "the domestic triple pressure of demand contraction, supply shock and weakening expectations is still looming."

Looking ahead, Kang Yi, head of the statistics bureau, said at a press conference China will make economic stability its top priority and pursue progress in 2023.

The bureau was generally upbeat about China's economic outlook for this year, with the full resumption of work and production after the drastic relaxation of antivirus measures expected to create better conditions for overall improvement.

The International Monetary Fund estimates China's economy will grow 4.4 percent in 2023 from 2022.

In 2022, retail sales of consumer goods edged down 0.2 percent from a year earlier. Investment in fixed assets, excluding rural households, increased 5.1 percent, but that in real estate development plunged 10.0 percent.

Industrial production in China, dubbed the "world's factory," grew 3.6 percent, but slowed sharply from a 9.6 percent expansion logged in the previous year. The total value of exports climbed 10.5 percent.

FOCUS: China to focus on economic recovery,Taiwan emergency unlikely in 2023