A crucial issue cropped up at Japan's regular Diet session that convened Monday -- whether Prime Minister Fumio Kishida will look to hike the politically unpopular consumption tax to cover the child policies he is trying to advance.

Kishida has pledged to focus on child policies in 2023 in an apparent attempt to buoy the sagging popularity of his Cabinet by appealing to young parents, ahead of a string of local elections in the spring.

But Kishida no longer has the adequate political strength to carry out such a reform, particularly as previous governments struggled to even propose such a hike, analysts said.

A defeat in the unified local election and by-elections to fill vacant lower house seats in April could prompt a movement to oust Kishida from power, jeopardizing his cherished goal of hosting the Group of Seven summit in May in his home constituency of Hiroshima, they added. 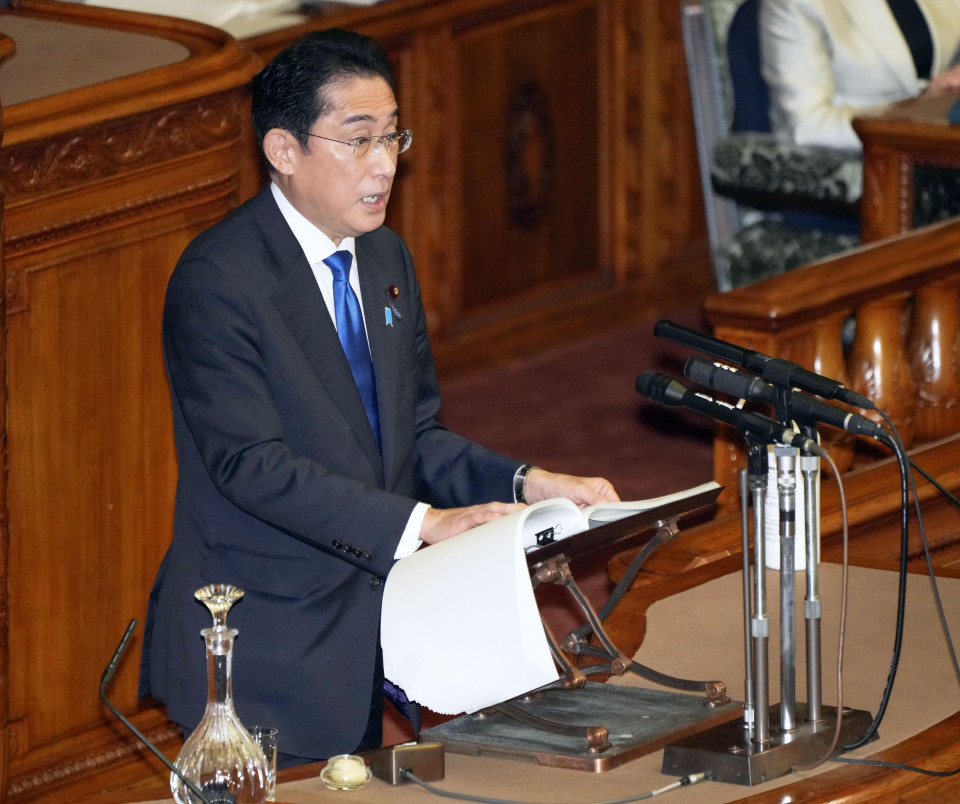 During the 150-day parliamentary session, Kishida is set to be grilled by the opposition bloc over dubious ties between lawmakers in his Liberal Democratic Party and the controversial Unification Church as well as a series of resignations by scandal-tainted ministers.

Many fear a consumption tax hike could drag down business and household spending, hampering economic growth. As such, debate on the tax has suddenly heated up even though Kishida has yet to hammer out details of his child-rearing policies.

In his policy speech at the beginning of the Diet session on Monday, Kishida promised to take steps to tackle Japan's rapidly declining population, vowing to present a general framework aimed at "doubling" the children-related budget by June.

But it was only last month that the government decided to roughly double its defense spending over the next five years and to acquire enemy base strike capabilities to deter attacks in a major shift in its security policy amid mounting regional military threats.

The Kishida administration has voiced its eagerness to raise corporate, income and tobacco taxes "at an appropriate time" in fiscal 2024 or later to secure roughly 1 trillion yen ($7.7 billion) in fiscal 2027 to beef up Japan's defense capabilities.

Opposition parties have lambasted Kishida for having made such significant decisions without sufficient discussion after last year's extraordinary parliamentary session closed in December.

Jun Azumi, the leading opposition Constitutional Democratic Party of Japan's Diet affairs chief, has expressed readiness to take on the government, saying, "We will face up to the Kishida administration, which is on track for tax hikes."

Kishida's sudden pitch for child policies comes as data is set to show that the number of babies born in Japan in 2022 likely fell below 800,000 for the first time since the government began compiling statistics on births in 1899.

In a bid to stave off the plunging birthrate, the administration is scheduled in April to establish a new agency to deal with problems surrounding child-rearing and family affairs, allocating around 5 trillion yen in the draft budget for the next fiscal year.

The premier has instructed the relevant ministers to map out a springboard for discussion over child policies by the end of March.

Judging from the timeframe, before the local elections in April, Kishida may be able to announce the government's "pork barrel" policies, including boosting cash handout programs, without clarifying how they will be paid for, pundits said.

Hiroshi Shiratori, a political science professor at Hosei University, said Kishida seems to be laying his hopes on child policies to revive the popularity of his Cabinet, but the strategy might not work with public concern for increasing levies growing.

Akira Amari, a former economic minister and LDP heavyweight known for his close relationship with Kishida, has hinted the consumption tax rate could be raised for its current 10 percent.

Shiratori said opposition parties can "deliver a heavy blow" to Kishida if they successfully attack his administration over potential tax hikes during the regular Diet session.

Many economists have pointed out that Kishida should first try to seriously review government expenditure in order to squeeze financial resources to improve Japan's child policies, before considering tax hikes.

Shunsuke Kobayashi, chief economist at Mizuho Securities Co., said it is "meaningless" to increase the tax burden on younger people who are rearing children to provide support to them.

Kobayashi said the Kishida administration should cut ballooning spending on countering the novel coronavirus pandemic, such as subsidies for hospitals that accommodate COVID-19 patients, to ensure there is something in the budget for children.