Lone ozeki Takakeisho regained a share of the lead Friday at the New Year Grand Sumo Tournament with a hard-fought victory over front-runner Onosho.

Takakeisho will enter the final weekend of the 15-day meet tied at 10-3 with the No. 8 maegashira as well as No. 13 Kotoshoho after continuing his head-to-head dominance of the overnight leader on Day 13 at Ryogoku Kokugikan.

Following consecutive losses that threatened his title bid, the two-time Emperor's Cup winner made a stronger start against Onosho, trading upper body blows and getting his nose bloodied before pushing the former komusubi off the dohyo.

The highest-ranked wrestler in the absence of yokozuna Terunofuji, Takakeisho improved to 12-3 for his career against Onosho in the top division, including victories in their past seven meetings.

Kotoshoho won a frenetic battle against November grand tournament winner Abi (7-6), pushing and shoving the No. 3 before thrusting him to the sandy surface. 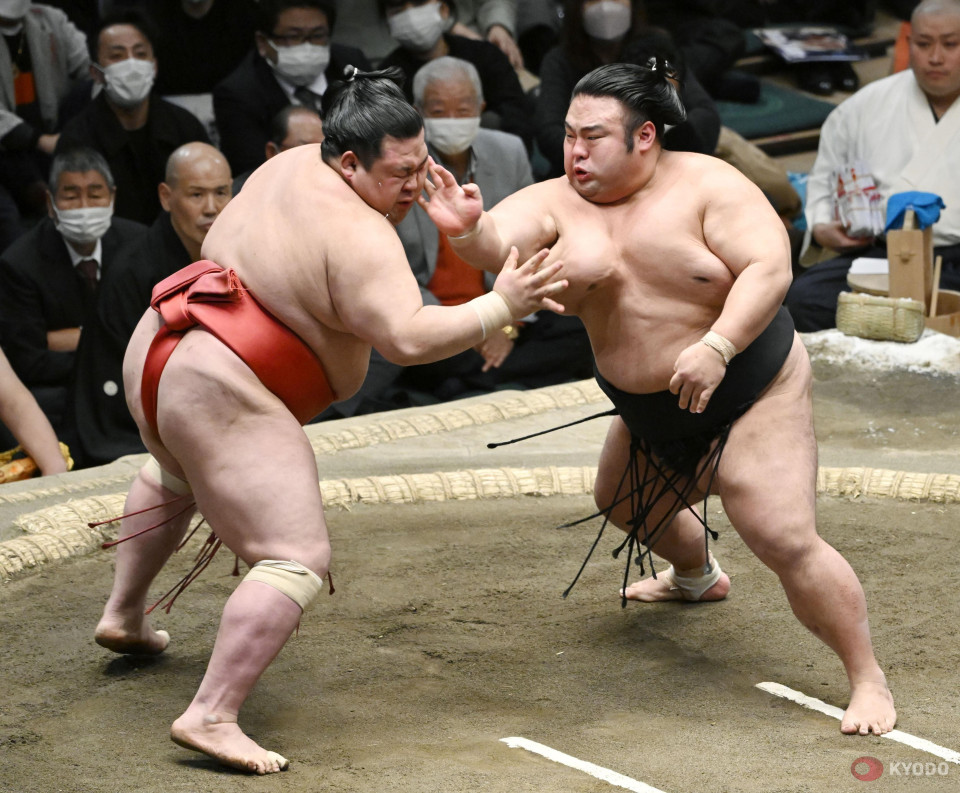 Takakeisho (R) and Onosho fight on the 13th day of the New Year Grand Sumo Tournament on Jan. 20, 2023, at Tokyo's Ryogoku Kokugikan. (Kyodo)

Former ozeki Shodai, demoted to sekiwake after November's meet, dropped to 6-7 with a force-out loss to No. 5 Ryuden (8-5). He now must win both of his remaining bouts to stay at sumo's third-highest rank.

Wakatakakage won his highly anticipated battle with fellow sekiwake Hoshoryu, staying low and executing a beltless arm throw to earn a victory that left both men at 7-6.

A day after taking down Takakeisho, Mongolian komusubi Kiribayama (9-4) stayed one win back of the leaders and strengthened his case for promotion by crushing out talented No. 3 Midorifuji (6-7).

Komusubi Wakamotoharu (7-6) closed to within one bout of a winning record in his first tournament among the distinguished "sanyaku" ranks by forcing out No. 6 Hokutofuji (7-6).

Another sanyaku debutant, komusubi Kotonowaka (6-7) kept alive his bid for a winning record with a slap-down victory over No. 2 Tamawashi (8-5).