Robbers of east Japan homes suspected of striking other areas

Members of a group suspected of staging robberies across east Japan are believed to have been involved in similar crimes in two western prefectures as well, investigative sources said Monday.

The group is suspected of carrying out multiple robberies, including some causing death or injury in six prefectures in the Kanto region, including Tokyo, from November, with police investigating possible links between these cases and three others, including one in Hiroshima.

In the city of Hiroshima on Dec. 21 last year, several people forced their way into a home that also served as a shop and restrained the family inside before fleeing with stolen cash, the sources said.

In another similar case in Iwakuni, Yamaguchi Prefecture, five people have been indicted for attempted robbery after a resident of a house had their hands bound on Nov. 7 last year, while a month earlier, a safe was taken from a house in the city of Inagi in Tokyo.

The group is also suspected of being involved in the fatal robbery of 90-year-old Kinuyo Oshio, who was found dead Thursday at her home in the Tokyo suburban city of Komae. 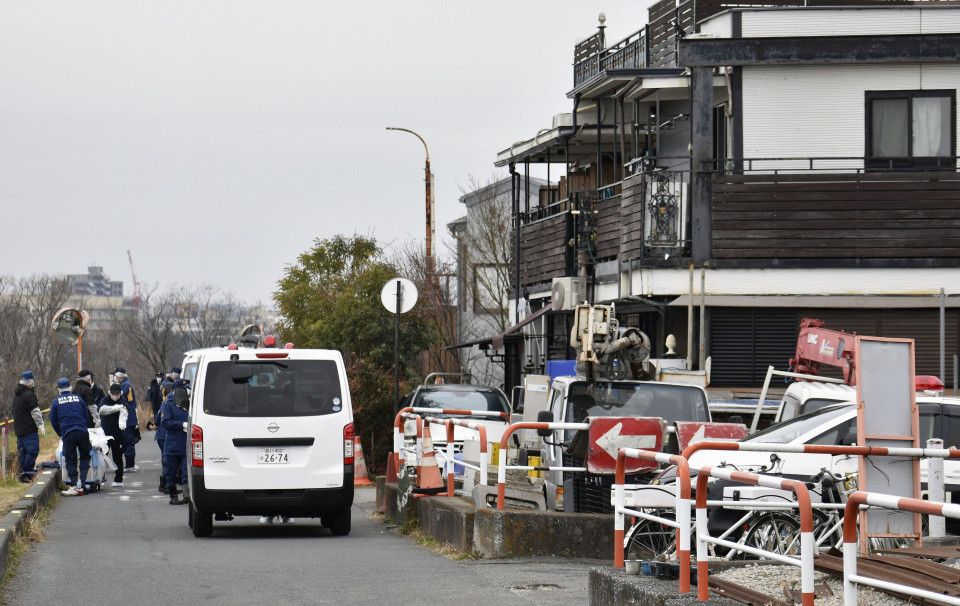 Investigators examine on Jan. 23, 2023, the area around the residence where Kinuyo Oshio was found dead following a robbery in Komae, Tokyo. (Kyodo)

One of the suspects in the December robbery of a residence in Tokyo's Nakano Ward was found to have messages on his phone pertaining to the incident in Komae, the sources said. Police have arrested two in the Nakano case and suspect five others were involved in the crime.

Police said the suspect, Rikuto Nagata, who was sent to prosecutors Sunday, told them the group was "formed to stage the robbery" and that the members were unknown to each other before that.

A man arrested for alleged theft at a jewelry store in Tokyo's Shibuya Ward was described as telling police he was "recruited from the dark web" and that he had committed the act as instructed.

In the Komae case, the sources said security camera footage and other sources showed Oshio went out and returned home at around 11 a.m. on the day of the robbery, and she was possibly attacked within an hour of her return as an autopsy found she died around midday.

The presence of two suspicious rental cars in the area around the scene on Wednesday and Thursday suggests Oshio's assailants observed her movements and that it was a premeditated attack, the sources said.

According to the sources, security camera footage suggests suspects in robberies in Ibaraki and Saitama prefectures this month used the same rental car.

Two days later, several men broke into the homes of elderly couples in the cities of Ryugasaki and Tsukuba in Ibaraki Prefecture, taking about 820,000 yen in cash in total and other items.

Police are investigating the incidents' connection to other robberies in the Kanto region, where rental cars were believed to have been used, including the Komae case.