Chinese President Xi Jinping and his Philippine counterpart Ferdinand Marcos Jr. agreed Wednesday their countries will "continue to properly handle maritime issues through friendly consultations," according to the Chinese Foreign Ministry, in reference to a territorial dispute in the South China Sea.

The two leaders, who met at the Great Hall of the People in the Chinese capital, also expressed readiness to restart negotiations on oil and gas development in the sea, the ministry said. 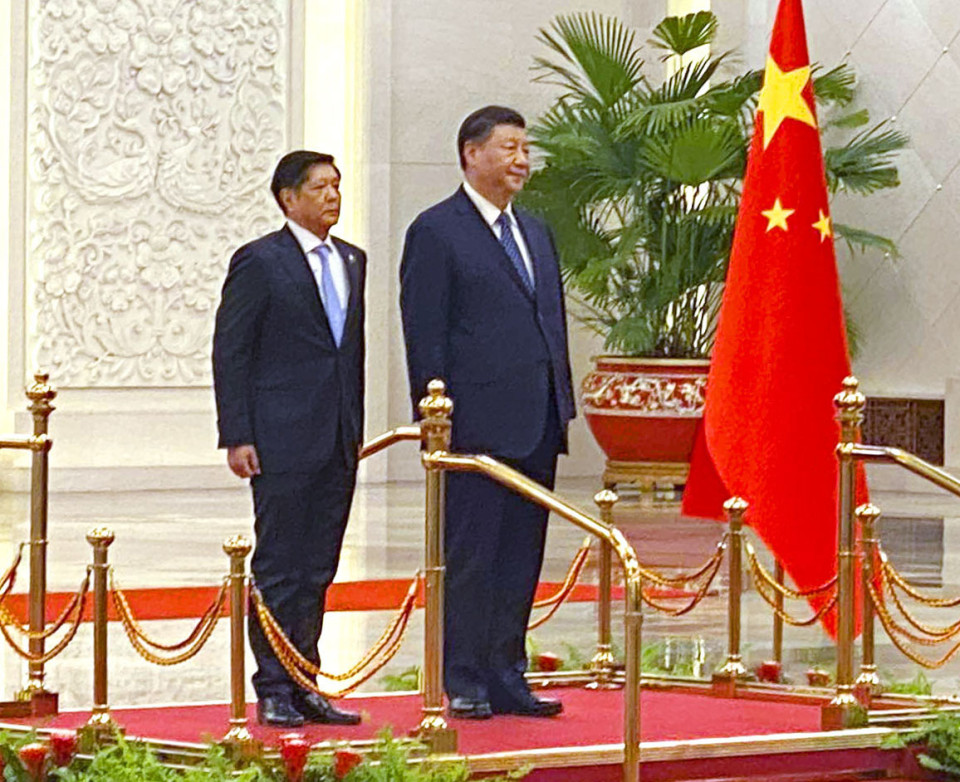 Chinese President Xi Jinping (R) and his Philippine counterpart Ferdinand Marcos Jr. are pictured at the Great Hall of the People in Beijing on Jan. 4, 2023. (Photo courtesy of the Philippine presidential office)(Kyodo)

Under the administration of Marcos' predecessor Rodrigo Duterte, the two countries held three years of talks on joint exploration of energy resources in the South China Sea, but the Philippines said last year the negotiations had been terminated amid confrontation over overlapping territorial claims in the sea area.

After their talks, Xi and Marcos jointly witnessed the signing of cooperation documents on China's Belt and Road infrastructure initiative, among others. The two sides have identified four key areas of cooperation, namely agriculture, infrastructure, energy, and people-to-people and cultural exchanges.

The Philippine presidential office said the two countries inked 14 bilateral agreements, including one on establishing a communication mechanism on maritime issues between their foreign ministries to avoid miscalculations in the South China Sea.

Marcos said the resumption of talks on the joint oil and gas exploration is "very important" to his country. "We hope that these negotiations will bear fruit," he was quoted as saying in a statement.

Xi said Marcos is the first foreign leader received by China this year and this "fully reflects the closeness" of bilateral relations, according to the ministry. The two countries should strengthen exchanges so as to better contribute to their development and prosperity, he added.

Marcos said he looks forward to "opening a new chapter of comprehensive strategic cooperative relations" between the two countries, the ministry said.

The summit meeting came as Marcos, who took office in June last year, vowed to take a different path from Duterte, known for his appeasement of China, and moved toward strengthening ties between Manila and Washington.

Duterte took an accommodating stance toward China's incursions in Philippine-claimed waters in exchange for promised investment from Beijing.

Xi said China is willing to focus on cooperation with the Philippines and other Southeast Asian nations and help the region "shake off the shadow of the Cold War," avoiding confrontation between camps, the ministry said, in an apparent reference to U.S. influence in the area.

The Chinese leader also said exchanges between the people of the two countries are expected to return to the pre-pandemic level, with China having rolled back its stringent "zero-COVID" policy.

The Philippine leader is on his first state visit outside Southeast Asia since he assumed the presidency, traveling with a business delegation. Marcos and Xi held their first summit talks in Bangkok in November.

China, the Philippines, Taiwan, Malaysia, Vietnam and Brunei have overlapping claims in the South China Sea, which is rich in natural resources and serves as a critical trade route.

In 2016, the Permanent Court of Arbitration in The Hague invalidated China's sweeping claims in the South China Sea, but Beijing rejected the decision and has continued its military buildup in the area.

In December, Manila said it was "seriously concerned" about fresh reports that China has been reclaiming unoccupied islands in the South China Sea, saying it contravened the principles of self-restraint set out in a 2012 agreement between China and the Association of Southeast Asian Nations, a bloc that includes the Philippines.