Having reached new heights at the past two tournaments, Japan face an uphill battle replicating their success at this year's Rugby World Cup in France.

Jamie Joseph's men will tackle heavyweights England and Argentina in Pool D at the Sept. 8 to Oct. 28 World Cup and must beat at least one of them to reach their goal of a second straight trip to the knockout stage.

They will also need to survive an always bruising encounter with Samoa and avoid dropping points against first-time qualifiers Chile in the round robin, which they will start with significantly less preparation time than in the past.

The Brave Blossoms served notice to the rugby world in England in 2015 by upsetting giants South Africa in a match dubbed the "Brighton Miracle." They made further inroads four years later on home soil, advancing to their first quarterfinals after toppling traditional rugby nations Ireland and Scotland in the pool stage. 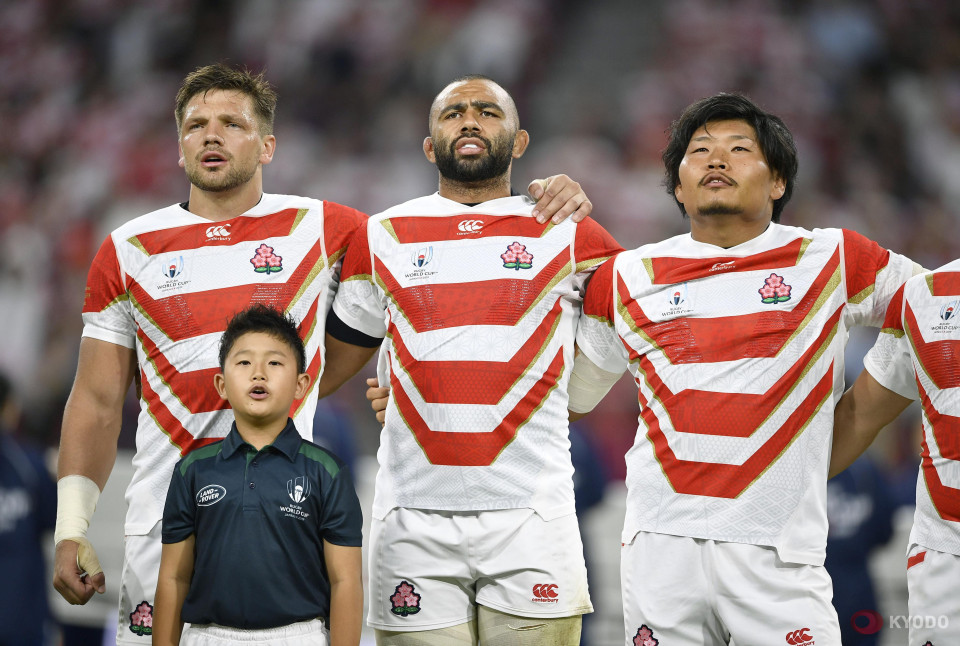 (From L) Japan's Pieter Labuschagne, Michael Leitch and Keita Inagaki sing the national anthem ahead of a Rugby World Cup Pool A match against Samoa on Oct. 5, 2019, in Toyota, central Japan. (Kyodo)

Before both tournaments, the national squad went into extended camps focused solely on the World Cup. For 2019 in Japan, they had a seven-month buildup with the added benefit of the Joseph-coached Super Rugby team Sunwolves serving as a virtual training side for the Brave Blossoms.

This time around, they will have under four months from the end of the Japanese club rugby playoffs until the World Cup, having played fewer high-level games in the four-year interim due to the COVID-19 pandemic and dissolution of the Tokyo-based Sunwolves.

The condensed timeframe makes the domestic competition, now in its second season under its Japan Rugby League One rebranding, more important to international players than ever, according to prop Keita Inagaki, a member of the defending champion Saitama Wild Knights.

"We have to maintain the skills, physical condition and mentality needed to take on the world," said Inagaki, whose club is likely to once again be involved until late in the postseason.

Inagaki, a veteran of the past two World Cup campaigns, said Japan's success depended on elaborate game-planning and being better drilled than their bigger, more physical international opponents.

"If we play straightforward rugby like the stronger countries, we'll lose out physically," he said. "Each player needs a deep understanding of his role, and that doesn't develop as soon as you get together." 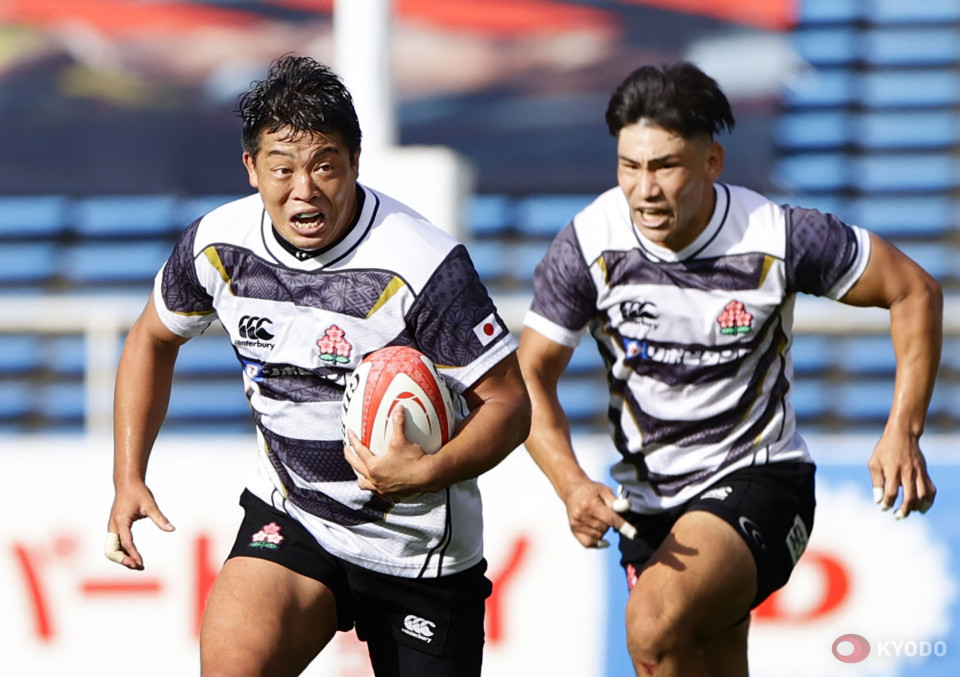 Japan's Atsushi Sakate (L) runs with the ball alongside Ryoto Nakamura during the second half of a rugby match against Australia A on Oct. 8, 2022, in Fukuoka. (Kyodo)

Inagaki's Wild Knights teammate Atsushi Sakate is set to captain Japan at a World Cup for the first time after taking the reins last year. The 29-year-old hooker has big shoes to fill as he follows in the footsteps of predecessor Michael Leitch, who was an inspirational figure in 2015 and 2019.

Sakate has so far appeared up to the task while captaining his country in test matches against Uruguay, France, New Zealand and England in 2022. While their only wins came in a two-test sweep of the South Americans, the Brave Blossoms gave both the visiting Bleus and All Blacks a scare in Tokyo.

A lopsided loss to England at Twickenham in November, meanwhile, was a more sobering reminder of rugby's world order.

"It was a great experience being able to play matches against the best teams," Sakate said.

World No. 10 Japan have not beaten a higher-ranked nation since the 2019 World Cup, but strong showings by some of their emerging players against top-class opponents are reason for optimism. 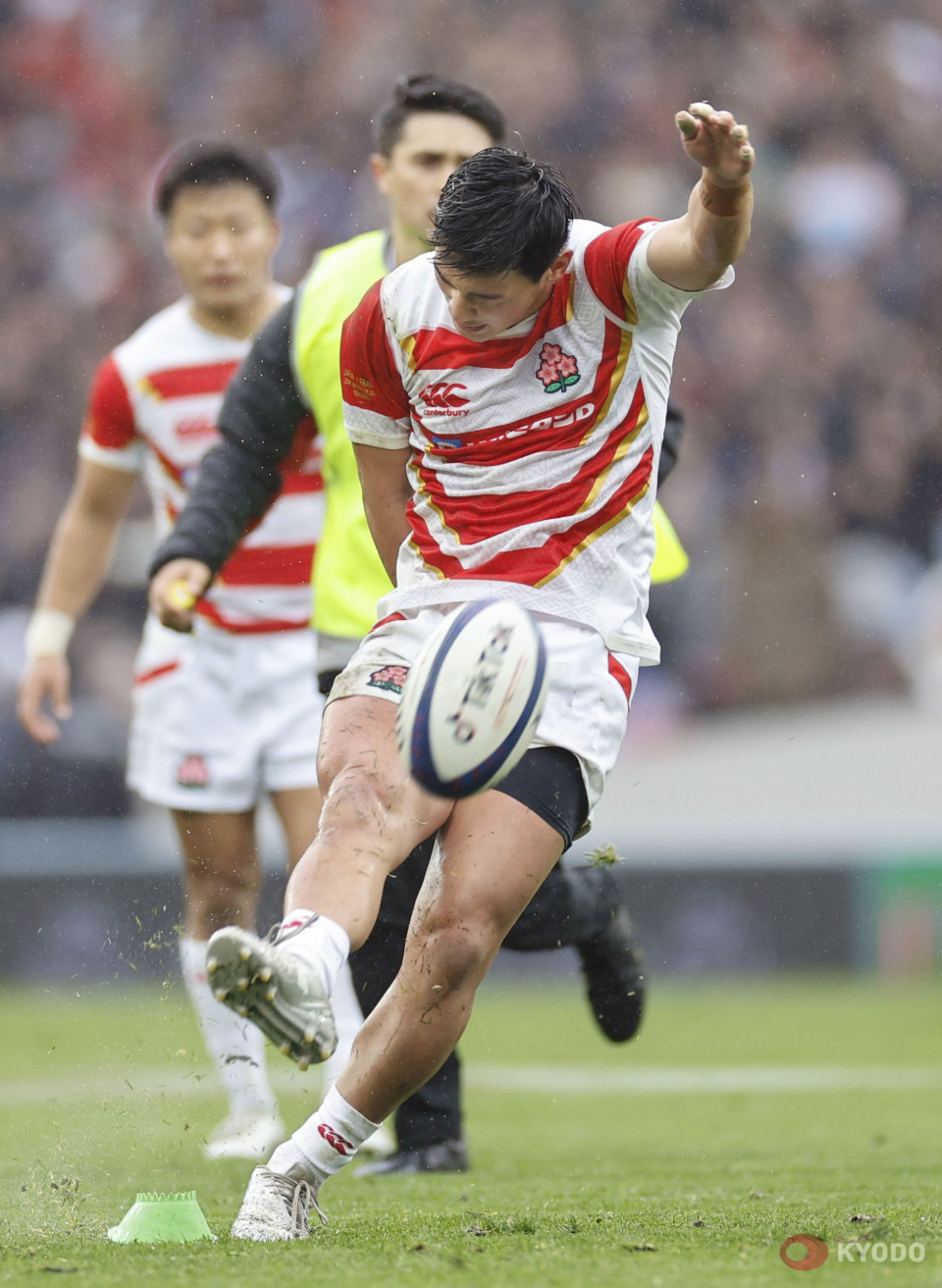 Lee Seung Sin of Japan kicks a penalty during the first half of a rugby test match against France on Nov. 20, 2022, in Toulouse, France. (Kyodo)

Among those to have made their mark are flyhalf Lee Seung Sin and scrumhalf Naoto Saito, who marshalled the attack in a closely fought 20-15 defeat to France in the second of two July tests.

"I developed the mindset that I can do it," 21-year-old Kobe Steelers star Lee said.

New Zealand-born Warner Dearns was also a standout for the Brave Blossoms in his second year as an international. The 201-centimeter lock produced one of the highlights of Japan's 38-31 loss to the All Blacks in October, charging down a kick to score a second-half try that gave the hosts a shot at a historic upset.

Although no longer captain, the 34-year-old Leitch remains an integral member of the national squad, providing leadership on and off the field ahead of his fourth World Cup.

The Brave Lupus Tokyo back rower has undertaken intensive rehabilitation for groin and knee injuries in order to return to rugby's biggest stage. 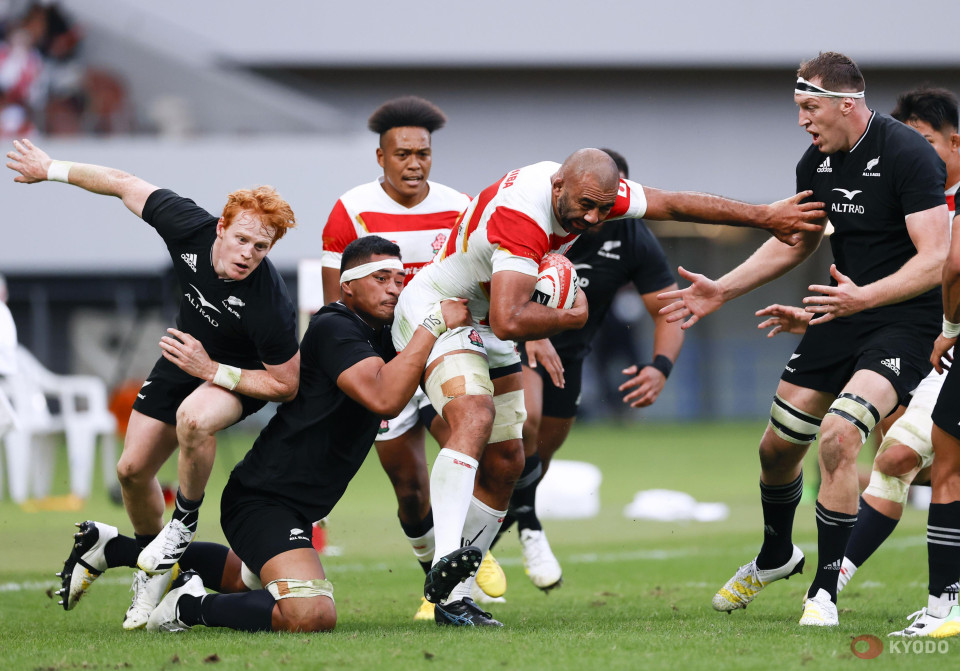 Michael Leitch (C) of Japan pulls away from a tackle during the first half of their rugby test match against New Zealand at Tokyo's National Stadium on Oct. 29, 2022. (Kyodo)

"People around me say this will be my last (World Cup) but I'm not going to say it'll definitely be my last," said Leitch, who feels fully fit as he approaches a career milestone.

"Only a select group of people can achieve (four World Cups). I'm in the form of my life."

While Japan will accomplish their stated goal if they reach the last eight again in France, Leitch wants his teammates to set their sights higher.

"I have a dream of Japan winning (the World Cup)," he said. "We can do it someday if we increase the number of players who aim for it. I want to go for it."

Rugby: RWC 2023 wide open, will be "most fascinating" yet, says Eddie Jones