The Japanese government was ordered Monday to pay damages to two people over their forced sterilization under a now-defunct eugenics protection law in the first such ruling by a district court.

The Kumamoto District Court found the 1948 law unconstitutional and awarded a total of 22 million yen ($170,000) in compensation to the plaintiffs, Kazumi Watanabe, 78, and a 76-year-old woman. It is the third case in which damages were awarded, after two high courts overturned lower court decisions. 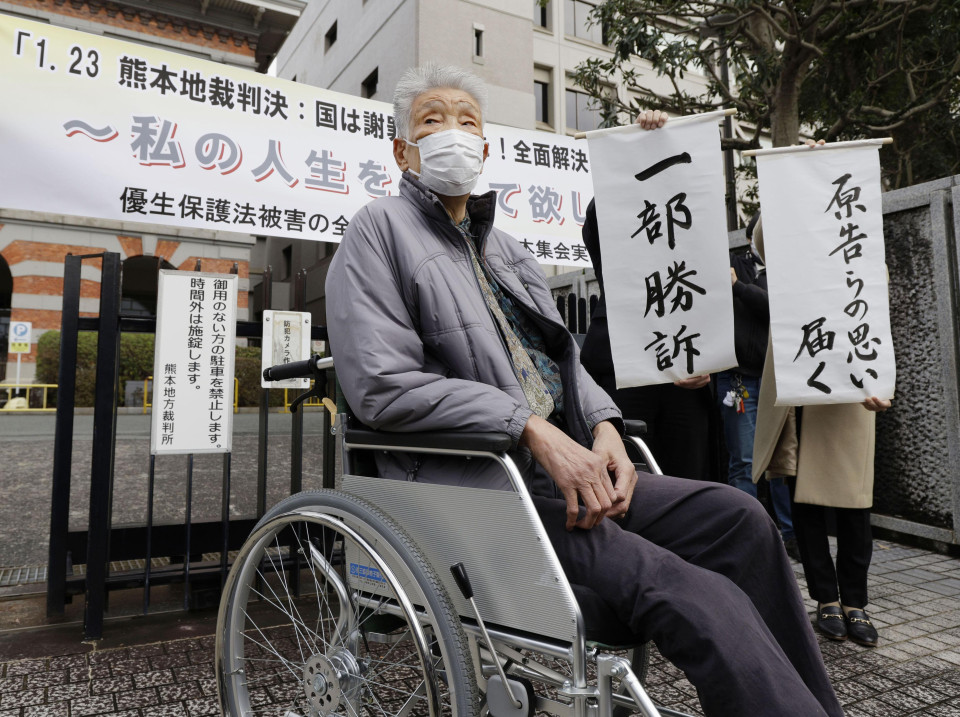 Plaintiff Kazumi Watanabe is pictured in front of the Kumamoto District Court on Jan. 23, 2023, after it ordered the state to pay damages over forced sterilization under a now-defunct eugenics protection law. (Kyodo)

"To remove a person's reproductive function is an extreme human rights violation," said Presiding Judge Yuichiro Nakatsuji. "It infringes on the right to pursue happiness."

"The surgeries that occurred under the defunct law cannot be accepted as legitimate or logical," he added.

According to the complaint, Watanabe was diagnosed with osteoarthritis as a child, and was forced to have his testicles removed without his consent. Meanwhile, the woman had an abortion and had her fallopian tubes tied to prevent future pregnancy when she was in her 20s, after a doctor told her that her fetus may have a disability.

The court ruled that a statute of limitations of 20 years for an unlawful act under the civil code did not apply to the case, as victims had been unable to file lawsuits over an extended period of time amid the lack of an investigation by the government into the surgeries and consideration of relief measures, Nakatsuji said.

Similar lawsuits have been filed with 10 courts and branches across Japan, with the Tokyo High Court and Osaka High Court ordering the state to pay damages. Although seven district courts dismissed compensation, five of those ruled the defunct eugenics law unconstitutional.

Between 1948 and 1996, the eugenics protection law authorized the sterilization of people with intellectual disabilities, mental illnesses or hereditary disorders.

About 25,000 people were sterilized, according to government data.

A law took effect in 2019 to pay 3.2 million yen in state compensation to each person who underwent forced sterilization, but it has received criticism over the uniform amount.