Former chief of the U.S. Indo-Pacific Command Philip Davidson said Monday he is standing by his earlier assessments that China may try to attack Taiwan by 2027, with Beijing showing no signs of backing down from its threat of using force against the self-ruled island to achieve reunification.

In an interview in Tokyo, the 62-year-old retired admiral also welcomed Japan's recent decision to acquire long-range strike capabilities and to significantly increase its defense spending despite its long-held pacifism, calling them the "most profound change in the Japanese Self-Defense Forces in more than 60 years."

He also indicated his support of Tokyo's plan to procure U.S.-made long-range Tomahawk cruise missiles amid China's growing assertiveness in the region, acknowledging that they are "the quickest way" to bring the so-called counterstrike capabilities that would lead Japan to potentially possess abilities to hit targets inside enemy territory. 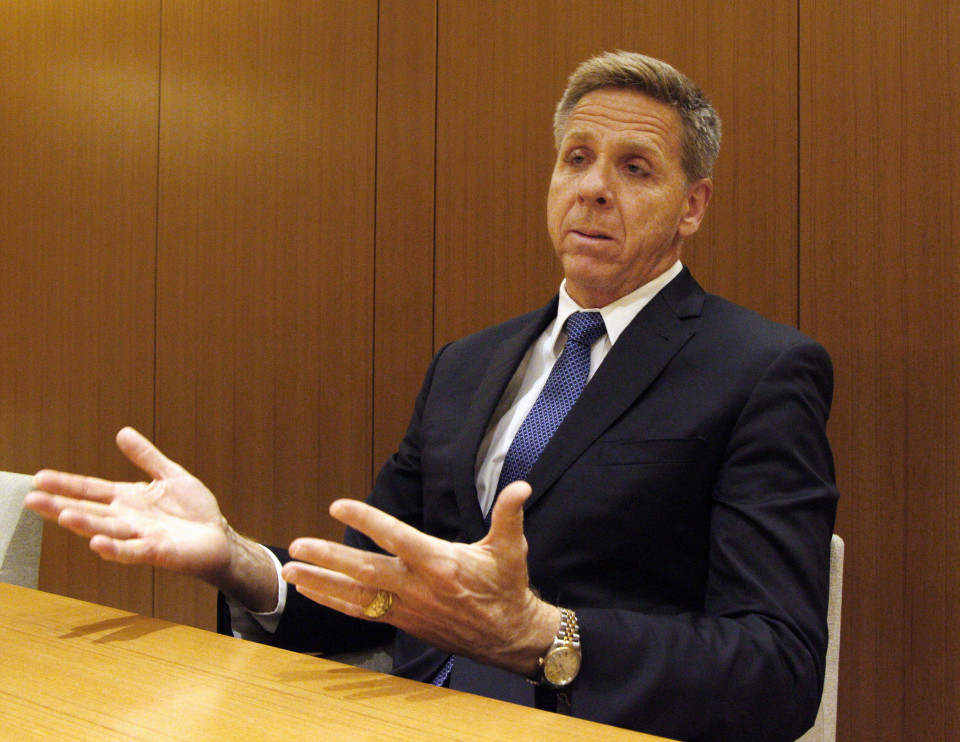 Prior to leaving the post of commander of the U.S. Indo-Pacific Command in 2021, Davidson caused ripples by testifying before the U.S. Senate Armed Services Committee in March of that year on a timeline for a potential conflict in the Taiwan Strait.

"I think the threat is manifest during this decade, in fact, in the next six years," he told the hearing.

Tensions over Taiwan, which China views as its territory, heightened further last year, with Beijing ramping up military activity in response to a visit to the island by Nancy Pelosi, then U.S. House of Representatives speaker -- the third-highest-ranking U.S. official.

Touching on Chinese President Xi Jinping's speech during the twice-a-decade Communist Party congress in October, in which he said China will "never promise to renounce the use of force" over the Taiwan issue, Davidson noted, Xi's statement was "a signal that my assessments in the spring of 2021 hold true to this day."

Recalling his remarks in 2021, Davidson also said "any potential conflict" would include a massive cyberattack, massive missile barrage, a blockade of Taiwan and potential seizure of an outer island, in addition to an all-out assault.

The 2027 calculation came from "the potential then for Xi Jinping to be seeking a fourth term" as the ruling Communist Party chief, Davidson said, an ambition the Chinese leader may be harboring after securing a norm-breaking third five-year term as general secretary in the wake of the party congress in October last year.

Xi has said that resolving the Taiwan question and realizing China's complete reunification is a "historic mission" for the party and a "natural requirement" for achieving the rejuvenation of the Chinese nation, which it aims to complete by 2050.

China and Taiwan have been governed separately since they split in 1949 due to a civil war. Beijing has since endeavored to bring the island back into its fold.

The United States changed its diplomatic recognition from Taipei to Beijing in 1979 but has kept up unofficial relations with Taiwan and supplies the island with arms and spare parts to help it maintain sufficient self-defense capabilities.

A Taiwan contingency could draw the United States and its close ally Japan into a conflict with China, given the proximity of its southwestern islands, including the Senkakus, a group of East China Sea islets controlled by Tokyo but claimed by Beijing.

Davidson, an advisory committee member of the Sasakawa Peace Foundation USA, a think tank in Washington, said a Taiwan conflict should be deemed a "concern" also for Japan, citing "the range and size" of offensive and defensive operations and the location of the uninhabited Senkaku islets, which are only about 170 kilometers away.

He said Japan's envisioned acquisition of counterstrike capabilities would bring "a great change in the deterrent capability of our two nations here in the Western Pacific."

"You can't win a football game by having defensive prowess only," Davidson said, adding that there is a need to "field something that gives your adversary pause" or "some punishments" beyond dealing with attacks through the existing ballistic missile defense system.

The Japanese government has maintained that having the capability to strike enemy bases is possible under the postwar pacifist Constitution if it can be considered a measure of self-defense. But Japan had opted not to equip its defense forces with the abilities, leaving the role up to the United States.

Davidson said the "deep" coordination between the United States and Japan over ballistic missile defense will help the two countries cooperate in conducting counterattack operations, noting that the key would be the integration of intelligence surveillance from space and air domains with the land, sea or air assets that have the actual fire capabilities.

It will "certainly take some time" until the counterstrike capabilities will become fully operational, but it would also be "dependent on how much urgency our two nations put on it to move forward," he added.