Rugby: RWC 2023 wide open, will be "most fascinating" yet, says Eddie Jones

Former England, Japan and Australia coach Eddie Jones believes the 2023 Rugby World Cup will be the "most fascinating" yet and that several teams are capable of lifting the Webb Ellis Cup in France.

Speaking earlier this week with Kyodo News, Jones said he hoped the oval ball's flagship tournament could follow the recent FIFA World Cup and produce more upsets and shocks than ever before. 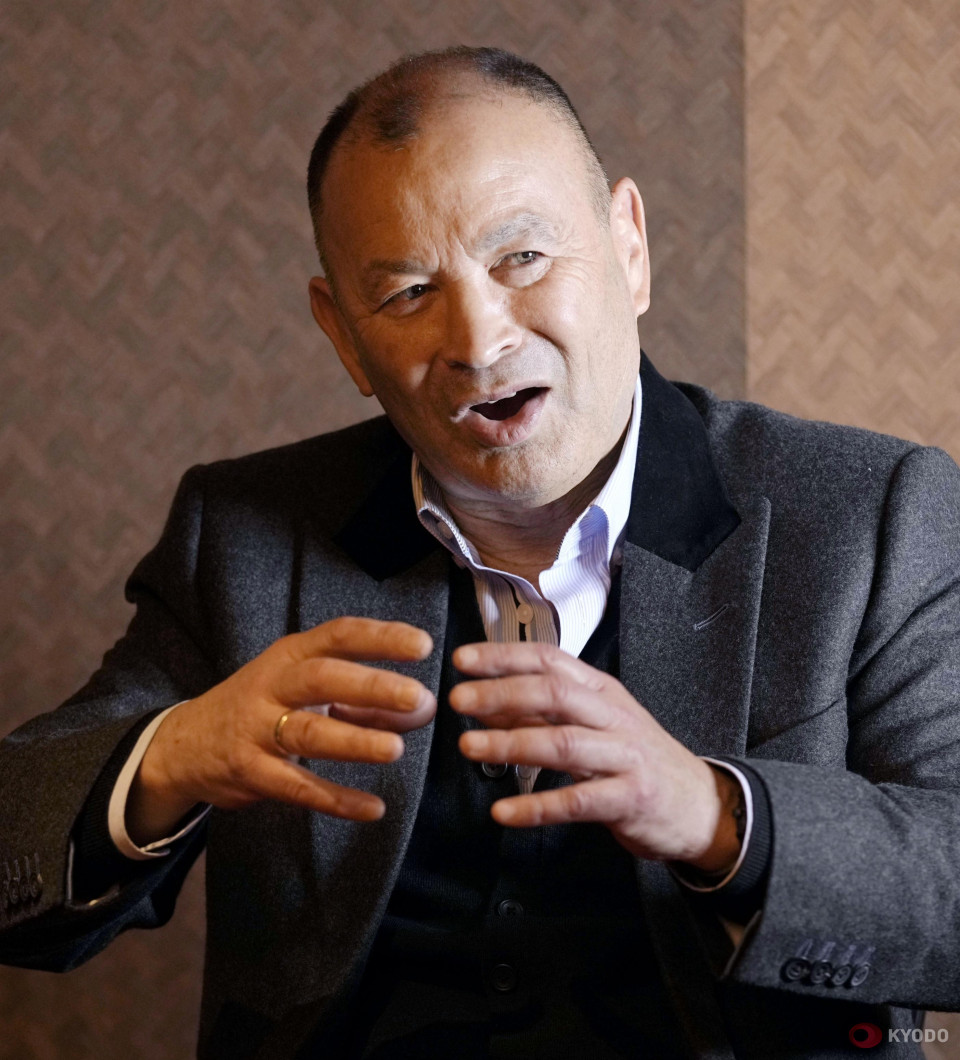 Former Japan rugby head coach Eddie Jones speaks during an interview in Tokyo on Dec. 26, 2022. He was sacked by the England rugby team earlier in the month following seven years in charge as head coach. (Kyodo) ==Kyodo

"In rugby, it's not so much about population, it's more about tradition, so what's to say two smaller countries cannot make the final four. Imagine if you had a final four of New Zealand, South Africa, Japan and Fiji. Imagine how fascinating that would be -- probably not too fascinating for Ireland or France (World Rugby's current top two nations), but there's no reason that couldn't happen."

Jones -- who won a gold medal as an advisor to South Africa at the 2007 World Cup and silvers as head coach of Australia in 2003 and England in 2019 -- said the reason such upsets were possible was because "there has been a talent equalization across the world."

"There's been a coaching equalization so, just for instance, Japan has had Jamie Joseph and Tony Brown, who I imagine would be good enough to coach the All Blacks. So that's an advantage for Japan. Fiji now have a world-class training center, which they never had before. So all these changes are happening that are allowing countries to come up. So it makes it a much more even playing field."

However, the 62-year-old Australian admitted that even if there were some upsets along the way, it is likely the eventual winner would be one of the teams currently in the top six in the rankings -- Ireland, France, New Zealand, South Africa, England and Australia. 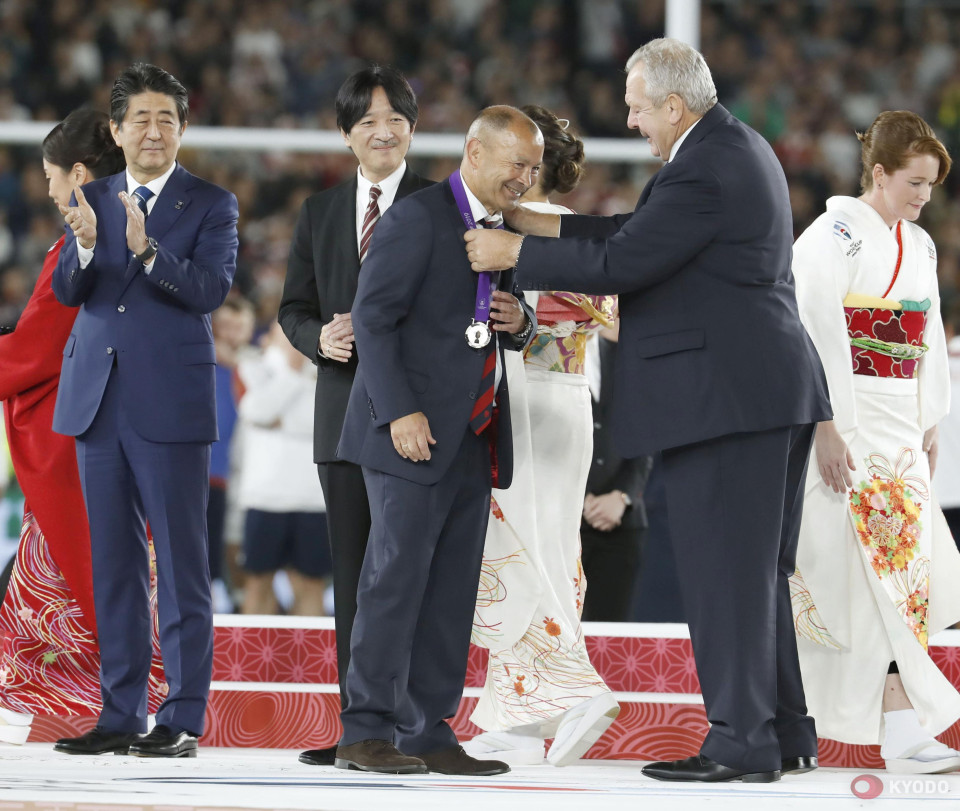 "There's three clusters of teams as I look at it," he said, adding that of the top six teams in the first cluster, "there is nothing between them, so any of those teams could beat each other on the day."

Jones said the second cluster of teams included the likes of Japan and Argentina, who the Brave Blossoms face in Pool B at the World Cup along with England, Samoa and Chile.

"Probably any of those (in the second group) could beat the top six on their day, though probably not consistently. And underneath that you have another group of Italy, Samoa, Fiji, Tonga and Georgia, and all of those five could probably beat (the teams above them)."

Jones said such a situation was unprecedented in international rugby.

"The general pattern has been New Zealand has been miles ahead and then there's South Africa and England like in 2019 chasing them," he said, adding having three clusters "makes for the most interesting World Cup." 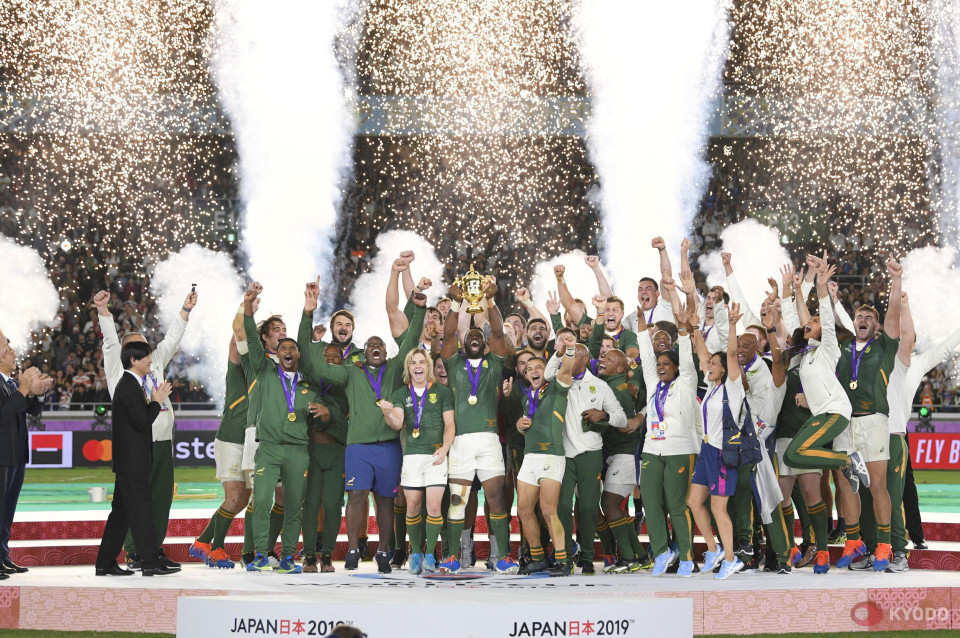 Jones also emphasized that factors outside of the control of players and coaches added further uncertainty to the tournament.

"You throw in the refereeing, where you have HIAs (Head Injury Assessments) TMOs (Television Match Officials), you've got yellow cards, you've got red cards."

"So whatever team improves the most in the next nine months, particularly in the top six, will win the World Cup. And that will come down to a number of factors, the number of best players available, it could come down to the experience of the coaching staff and then you have those uncontrollable factors." 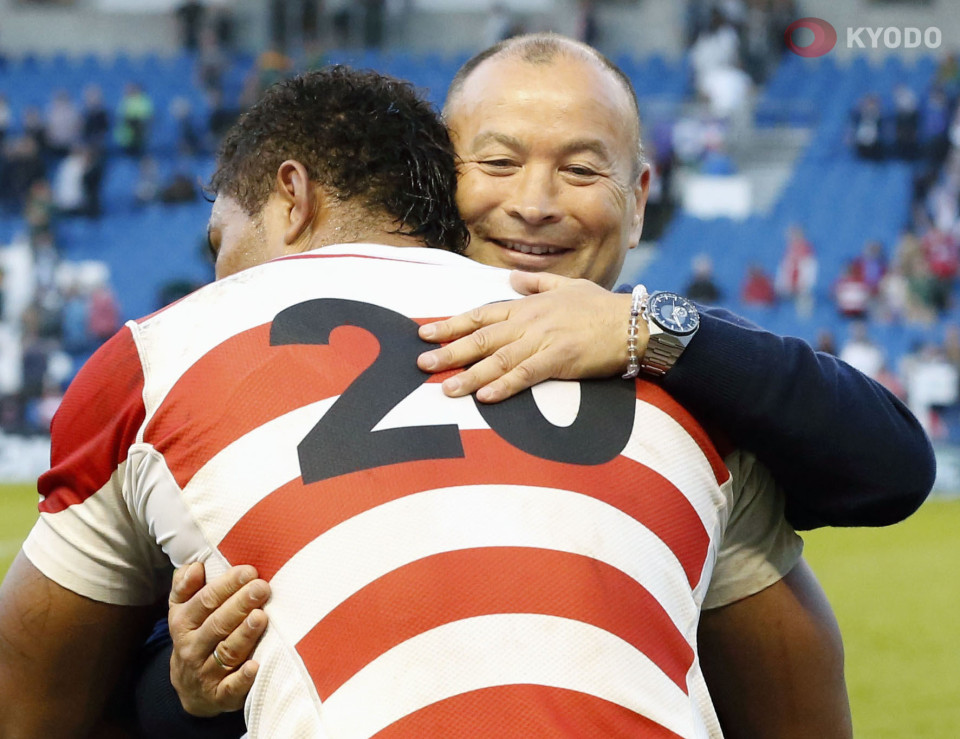 Eddie Jones hugs Amanaki Lelei Mafi after Japan pull off a stunning win over South Africa in Brighton, England, in their opening game at the 2015 Rugby World Cup. (Kyodo)

Regarding Japan, the area the Brave Blossoms most need to improve is the set piece, Jones said.

"You've got to get your set piece competitive, particularly your scrum, which is crucial at the World Cup," he said. "Then you need to develop the uniqueness of your attack. Japan continues to be one of the best-coached teams in the world, even if the results don't show that. They play really smart rugby, but it's a race to see if they can get their players ready in time."