Japan's memorable World Cup campaign ended with an agonizing penalty shootout loss to Croatia in the round of 16 on Monday, leaving the Samurai Blue manager and players crestfallen at missing their chance to rewrite history.

But while they may continue to feel the regret of narrowly missing a maiden quarterfinal berth, they believe the tournament will serve as a benchmark and encourage future generations.

"They've shown our future, the new era," said manager Hajime Moriyasu, who masterminded wins over giants Germany and Spain in the group stage. 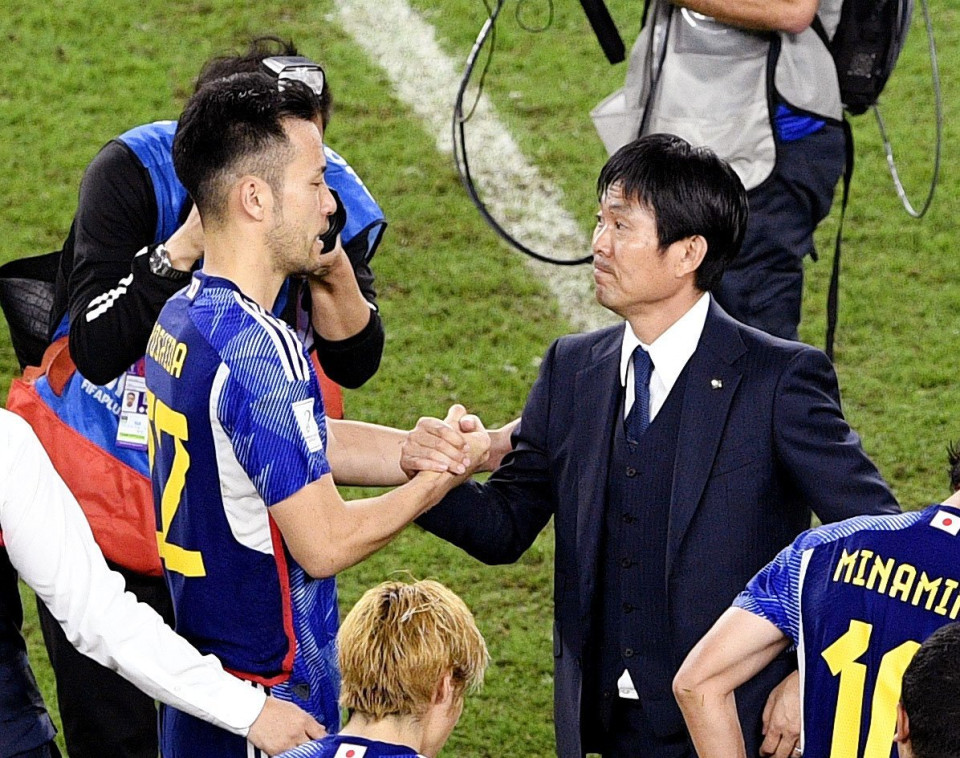 "We couldn't go beyond the last 16 but by taking confidence from beating the past winners in Germany and Spain, and if we think of not just catching them but going beyond, we can definitely change the future."

Daizen Maeda steered home the opener against Croatia two minutes from the break at Al Janoub Stadium in Qatar, giving Japan the lead for the first time in the World Cup knockout stage.

But Ivan Perisic's header against the run of play 10 minutes after the break brought Croatia level and Moriyasu could not repeat the magic that carried his side to the historic group-stage wins.

"The start wasn't bad and the first half went perfectly," said Wataru Endo, who had a stellar outing in midfield.

"We sat back in the second half, laying the defensive block while chasing the second goal, but their goal was difficult to deal with...It was frustrating to concede with that one cross."

In their rollercoaster group stage, Japan had to patiently look for opportunities to counter against Germany and Spain, while the loss against Costa Rica came when the Samurai Blue, not desperate for a win, failed to break down a deep-sat defense.

In Croatia, Japan faced a more balanced side overall, and in an evenly matched contest, the Samurai Blue showed more attacking intent than in any of their three group-stage matches.

But Croatia took control as the game wore on and Japan could not find an extra gear or idea to swing the match in their favor. With his side unable to reclaim the initiative against the previous tournament's runners-up, Moriyasu looked in vain to Kaoru Mitoma to provide a breakthrough.

"I lacked everything throughout the game. We just have to work to win at the next World Cup," said a tearful Mitoma, who came closest to providing a late winner for Japan with his marauding runs and who had a well-struck shot on target in extra time. 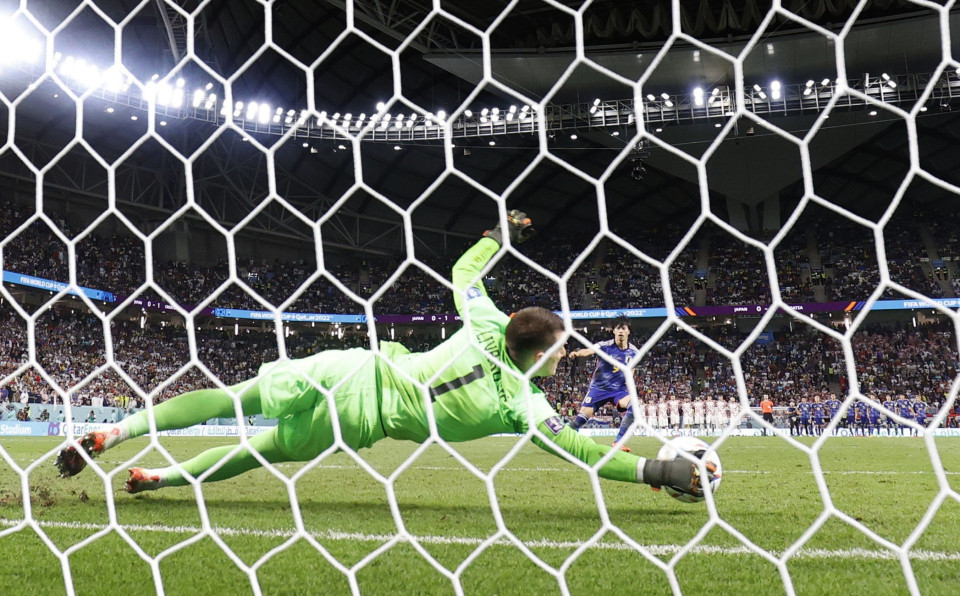 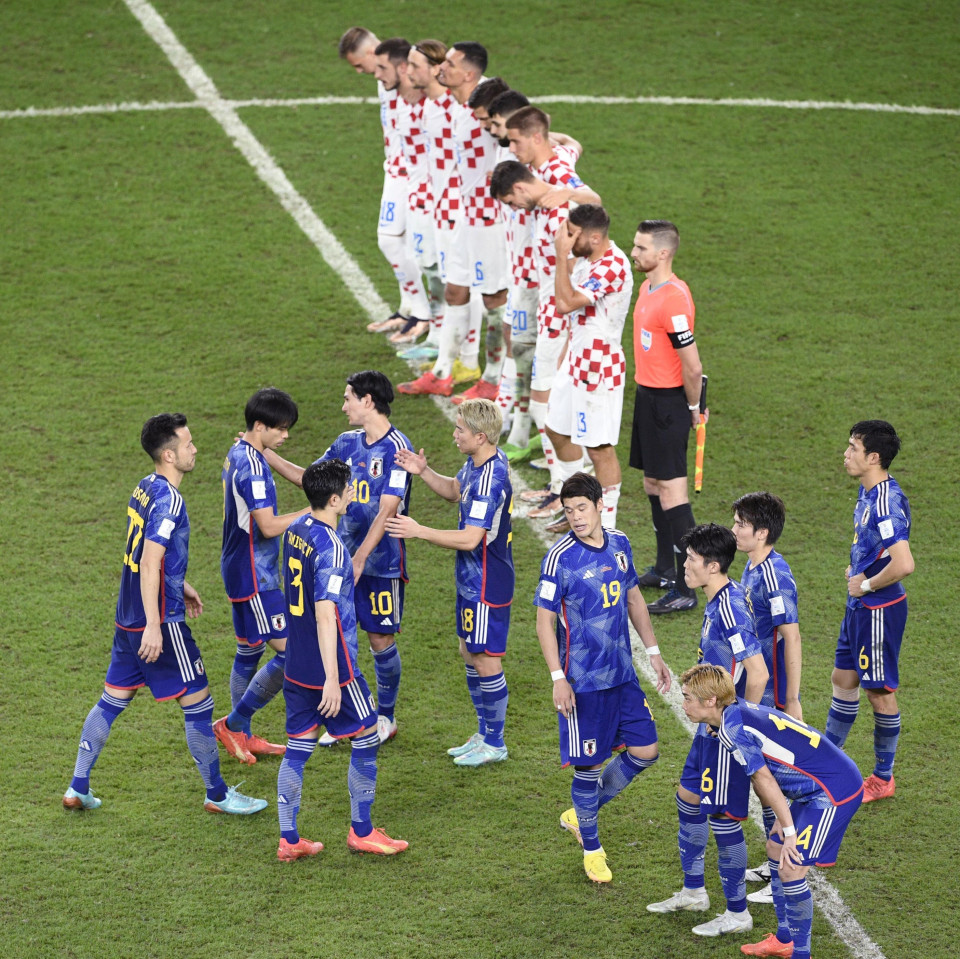 Kaoru Mitoma (2nd from L) and other Japan players react after his kick was saved in the penalty shoot-out in a World Cup round-of-16 match against Croatia at Al Janoub Stadium in Al Wakrah, Qatar, on Dec. 5, 2022. (Kyodo)

Junya Ito, another winger who worked tirelessly as a wing-back, lamented the ending of the squad's World Cup journey.

"I feel we played really solidly, with tenacity, and we were a really great team," Ito said. "(But) we have to win against these teams. I wanted to finish the game off before going into extra time or penalties."

While the anticlimactic ending to the 120 minutes and tepid penalties put a damper on the game, the players still felt the highs of an unforgettable campaign for Japan.

"We could show we can beat strong nations if we play with courage," said Hidemasa Morita, while Yuto Nagatomo, who became the first Samurai Blue player to appear in four World Cups, was happy they "could show the fighting spirit of Japanese."

Captain Maya Yoshida was apologetic for missing out on the coveted first quarterfinals berth at the World Cup, but like Moriyasu was positive the tournament will live long in the memory.

"I hope lots of children who watched this game will direct their dreams toward football...and one day play in the World Cup and break the wall," Yoshida said.