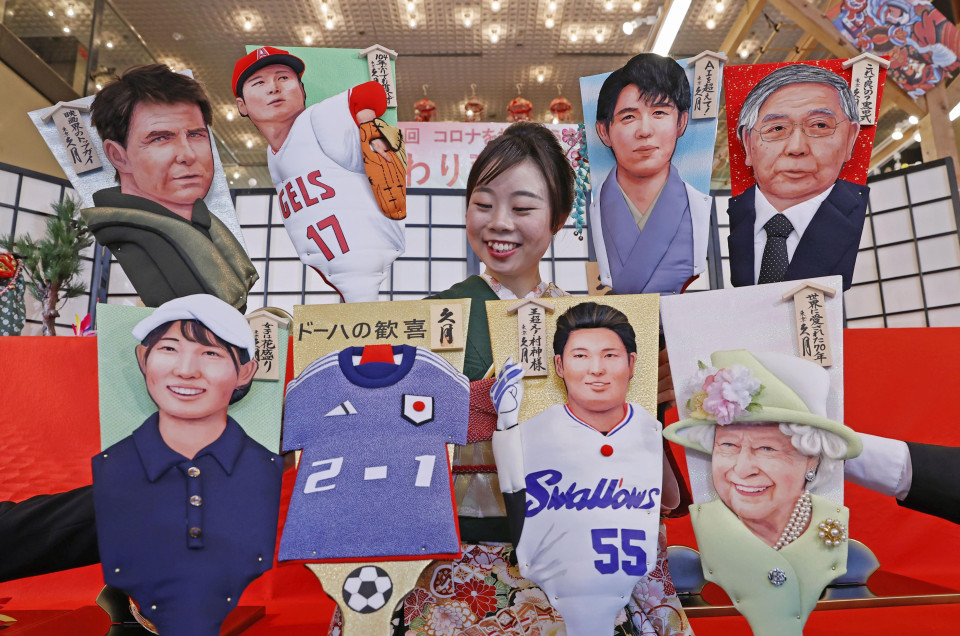 Photo taken at the head office of doll maker Kyugetsu in Tokyo on Dec. 6, 2022, shows traditional Japanese "hagoita" battledores decorated with images of some of 2022's newsmakers, including Britain's Queen Elizabeth II (R in front row), who died in September at age 96 after 70 years on the throne. (Kyodo) ==Kyodo

NARITA, Japan - Japan's national team returned home Wednesday having surprised the world with group-stage wins over Germany and Spain in soccer's World Cup in Qatar, eventually exiting in the round of 16 on penalties to Croatia.

Samurai Blue manager Hajime Moriyasu and captain Maya Yoshida alongside other players such as Ritsu Doan and Junya Ito were welcomed back by a huge crowd at Narita airport near Tokyo.

LAUSANNE, Switzerland - The International Olympic Committee decided Tuesday to postpone its final selection, scheduled for September-October 2023, of the host city for the 2030 Winter Olympics, citing concerns about the impact of climate change on potential future hosts.

The IOC, during an Executive Board meeting in Lausanne, said three interested parties -- Sapporo, Salt Lake City and Vancouver -- have been notified of the delay. One IOC executive said the final decision should be made no later than 2024.

TOKYO - China and Japan must avoid falling into a "zero-sum game trap" and instead become cooperative partners, Chinese Foreign Minister Wang Yi said Wednesday amid rising economic and security tensions between the United States and China.

In a video message to a forum attended by experts on the Asian countries, Wang also apparently urged Japan, a close U.S. security ally, not to lend a hand to Washington's perceived attempt to decouple China from the global economy.

WASHINGTON - The United States and Australia agreed Tuesday to step up engagement with Japan in military areas, such as by inviting Tokyo to join more of their exercises, amid China's growing assertiveness in the Indo-Pacific.

TOKYO - Japan is considering spending around 5 trillion yen ($37 billion) to develop and deploy long-range missiles from fiscal 2023 to 2027, government sources said Tuesday, as the nation aims to possess an enemy base strike capability to address growing security threats.

The homemade "standoff missiles," capable of being launched from beyond the range of enemy fire, will be central to what the government calls a "counterstrike capability," amid China's military buildup and North Korea's repeated ballistic missile launches, according to the sources.

BEIJING - China announced Wednesday additional measures to relax its strict "zero-COVID" policy, including allowing those with no or mild symptoms of the disease to be quarantined at home instead of designated facilities after rare nationwide protests against the restrictions erupted in late November.

Although the country's leadership under President Xi Jinping has not ditched its signature policy of implementing stringent anti-virus lockdowns, some features, such as the requirement of a negative test result to access many public spaces, have been removed since the protests took place to reduce public frustration.

SAN DIEGO, California - Japan's manager for the World Baseball Classic said Tuesday he is pondering whether Los Angeles Angels two-way star Shohei Ohtani should pitch at next March's tournament, hit, or do both.

"Basically, I'm thinking he should be able to do both," Hideki Kuriyama told a press conference at Major League Baseball's winter meetings in San Diego.

TOKYO - Bird flu cases in Japan are rising at a faster pace than two years ago when a record-high number of chickens was culled due to the disease, prompting the government to urge farmers and local governments to take thorough preventive steps.

As of Wednesday, a total of 27 cases of avian flu were confirmed across 16 prefectures in Japan, leading to the killing of over 4 million chickens, according to the Ministry of Agriculture, Forestry and Fisheries.

JAKARTA - A policeman was killed and 10 others were injured Wednesday when a suicide bomber blew himself up inside the compound of a police station on Indonesia's Java Island, police said.

Nine of the injured were policemen, with three of them seriously hurt, and a civilian, National Police Chief Listyo Sigit Prabowo told a press conference.

TOKYO - Police on Wednesday arrested five men with links to organized crime over a mass brawl that erupted as a group of around 100 were dining at a restaurant in a Tokyo skyscraper in October.

The fight allegedly broke out after uninvited members of the Chinese Dragon gang arrived and forced their way into a closed function believed to have been held to celebrate a senior member's release from prison in August.