The Bank of Japan on Tuesday expanded the trade band for long-term Japanese government bond yields in a surprise shift that was taken by financial markets as a rate hike, after the central bank swam against the global trend of monetary tightening.

The yen, which had borne the brunt of the BOJ's persistently dovish streak, spiked relative to the U.S. dollar and 10-year Japanese government bond yields jumped following the decision at the end of the bank's two-day policy meeting.

BOJ Governor Haruhiko Kuroda, however, rejected the view that the decision is equivalent to a rate hike or monetary tightening, saying that the widening of the trade range for the benchmark yield will boost the effectiveness of easing and bring calm to volatile bond markets. 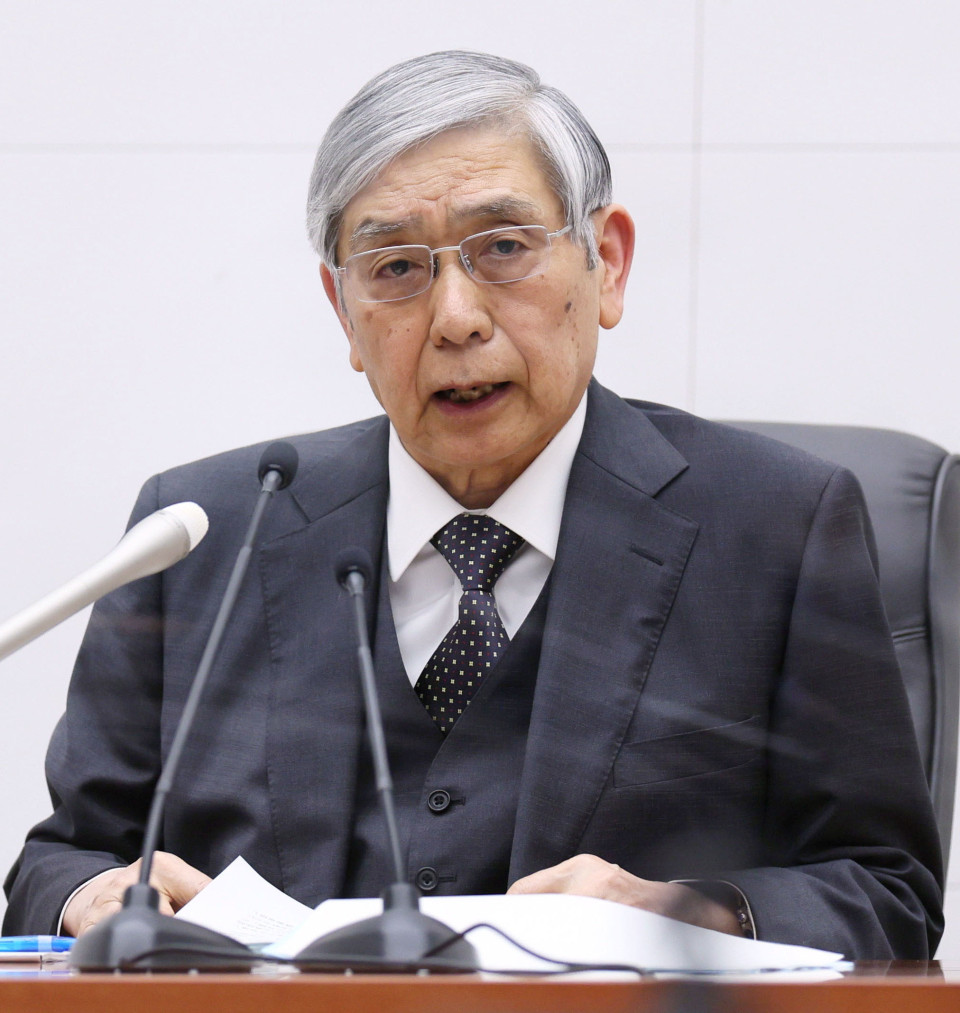 Bank of Japan Governor Haruhiko Kuroda speaks at a press conference in Tokyo on Dec. 20, 2022. (Kyodo)

"It is intended to make our YCC (yield curve control) function in a stable manner. It doesn't represent an interest rate hike, monetary tightening or a review of YCC itself," Kuroda told a post-meeting press conference.

The governor said it is "too early" to discuss an exit from the current easing framework or conduct another review of its policy tool kit when the BOJ's 2 percent inflation target is still far off.

Under its yield curve control program, the BOJ will continue to set short-term interest rates at minus 0.1 percent and guide 10-year yields to around zero percent.

Kuroda had previously taken a cautious stance on widening the band in the belief that the economy would not be able to withstand higher interest rates.

The BOJ sees the world's third-largest economy as recovering from the COVID-19 fallout, but simultaneously facing downside risks from a global economic slowdown.

Major central banks, including the U.S. Federal Reserve, have been raising interest rates to rein in soaring inflation.

Currency interventions by Japanese authorities and expectations of less aggressive rate hikes by the Fed have removed some selling pressure from the yen, which had plunged to its lowest level in over three decades.

The trend of monetary tightening overseas has made the BOJ an outlier that has not budged over its stance of keeping ultralow rates. The central bank has been under pressure to tweak its policy as overseas yields have been trending higher.

Kuroda expressed hope that the bond markets would stabilize going forward. "We cannot be optimistic. For now, we don't think it will be necessary to expand the band further. We are not considering such a move," he added.

Raising the cap from the current 0.25 percent to 0.5 percent, the BOJ will offer to buy unlimited amounts of 10-year bonds at the newly set rate every business day in principle.

Some economists say the BOJ gave the impression that it yielded to market pressure to tweak its policy, and such pressure on the central bank could further increase in the future again.

"The timing of the decision was definitely a surprise. The BOJ has started to lay the groundwork for post-Kuroda (policy adjustments)," said Hideo Kumano, executive chief economist at the Dai-ichi Life Research Institute.

Kumano said the BOJ could have opted for a smaller widening of the range but it apparently hopes its move will help fix the "dysfunctional" bond markets, even though such action could be taken as monetary tightening.

"As U.S. Treasury yields have been stabilizing, the BOJ can have a bigger impact (than otherwise) and the gap between U.S. and Japanese yields will become smaller, allowing the yen to rise. In a way, it can ease criticism about the yen's recent weakness, too," Kumano added.

In 2021, the BOJ breathed life into moribund bond markets by allowing the benchmark yield to move up and down 0.25 percent from zero, wider than the 0.2 percent earlier. Still, the central bank, which owned more than half of outstanding government bonds at the end of September, will face a challenge if it decides to make an exit from its unorthodox policy.

Kuroda, whose term ends in April, has repeatedly shot down market speculation of a tweak to the BOJ's monetary policy framework, even as the Fed, the European Central Bank and the Bank of England, among others, have entered their rate-hike cycles.

In recent days, BOJ board members have also dismissed expectations that the Japanese central bank will conduct another review of its policy toolkit.

Accelerating inflation, which has hit a 40-year high in the country, is increasingly compounding the BOJ's efforts to persist with ultralow rates aimed at supporting the economy and spurring wage growth. But the bank has taken the view that monetary easing is necessary because the price trend will not be sustained.

The government is planning to revise a decade-old joint accord with the BOJ to make the 2 percent inflation target more flexible, with details likely to be worked out with Kuroda's successor, government sources have said. The inflation target itself will likely be retained.

When asked about his view, Kuroda said, "At this point, I don't think it will be necessary to review the joint statement."