Japan, Britain and Italy said Friday they will jointly develop a next-generation fighter jet by 2035 in Tokyo's first such defense cooperation with nations other than the United States, a key security ally, as the global geopolitical situation is becoming more unstable.

The countries' leaders said in a joint statement that they will "build on our long-standing defense relationship" through the fighter development program, which will "accelerate our advanced military capability and technological advantage," as well as further strengthen their supply chains and defense industrial base.

Japan's Mitsubishi Heavy Industries Ltd., Britain's BAE Systems plc, and Italy's Leonardo S.p.A. will be the companies mainly responsible for the development, according to the Japanese Defense Ministry. 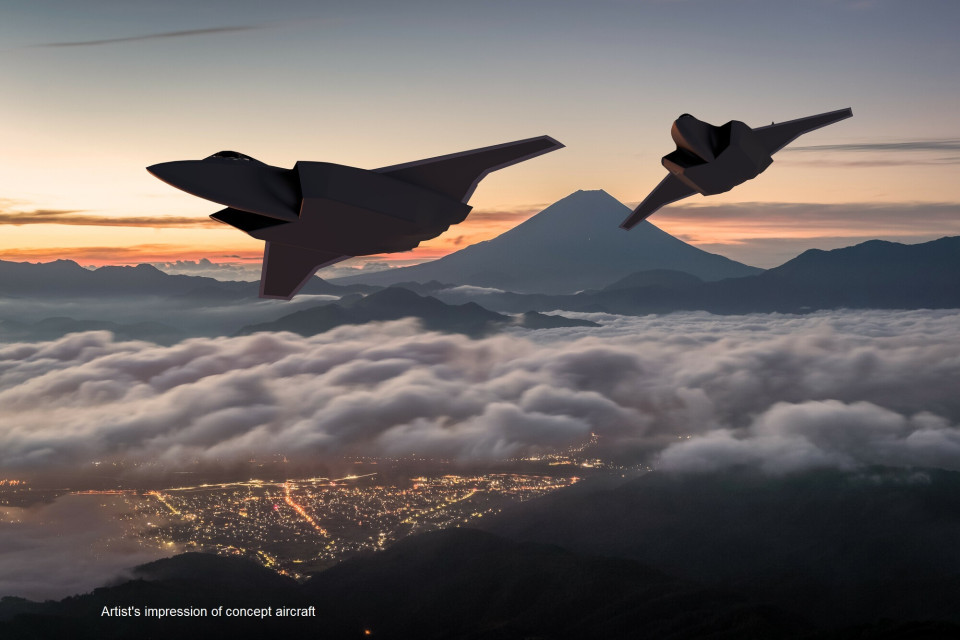 An artist's rendition of a next-generation fighter jet to be jointly developed by Britain, Italy and Japan. (Courtesy of Japan's Defense Ministry)(Kyodo)

At a press conference in Tokyo, Japanese Defense Minister Yasukazu Hamada said, "I hope our cooperation this time will become the foundation of peace and stability in the Indo-Pacific and European regions."

Before reaching the agreement, the three nations "held discussions under the policy that Japan will lead the development," Hamada added.

Japan plans to deploy 100 new fighters in 2035 to succeed its aging F-2 fighter of the Air Self-Defense Force, which will begin retiring the same year, according to the officials.

For Britain and Italy, members of the North Atlantic Treaty Organization, the new fighter will replace their combined 240 Eurofighter jets, they said.

"We share the ambition for this aircraft to be the centerpiece of a wider combat air system that will function across multiple domains," the joint statement said.

Tokyo has been promoting its security ties with NATO states, such as France and Germany. Japanese Prime Minister Fumio Kishida attended the NATO summit in June, where he stressed the need for Japan-NATO cooperation to cope with potential threats from authoritarian nations such as Russia and China.

Japan is also considering exporting the new warplane to other countries in the future, according to the officials.

To facilitate weapon exports, the Japanese government is expected to seek a revision of its strict guidelines regarding exporting defense equipment when it updates its national security policy next week.

The stringent rules have long been maintained under Japan's pacifist Constitution.

Other companies joining the project include Mitsubishi Electric Corp. and engineering firm IHI Corp. from Japan, Rolls-Royce plc from Britain and the aviation company Ge Avio S.R.L. from Italy, the ministry said.

The Japanese Defense Ministry and the U.S. Defense Department also issued a joint statement Friday, in which Washington expressed its support for Tokyo's fighter development project with the European partners.

"We have begun important collaboration through a series of discussions on autonomous system capabilities, which could complement Japan's next fighter program among other platforms," they said.

The two nations vowed to start concrete cooperation to this end next year with Japanese officials saying it will entail the research and development of drones capable of supporting the new jet's operations.

Japan had initially sought collaboration with U.S. defense firms to develop new fighters, but decided to look for other partners due to strict U.S. rules on information confidentiality.

Hamada said Washington had no plans to develop a fighter jet in the same time frame and that was one of the factors behind reaching an agreement with Britain and Italy.