Japan fell agonizingly short of their goal of a maiden World Cup quarterfinal berth Monday after a penalty shootout loss to Croatia in the round of 16, with Zlatko Dalic's men prevailing 3-1 following a 1-1 deadlock through 120 minutes at Al Janoub Stadium.

Here are five things we learned from Japan's run to the knockout stage in Qatar. 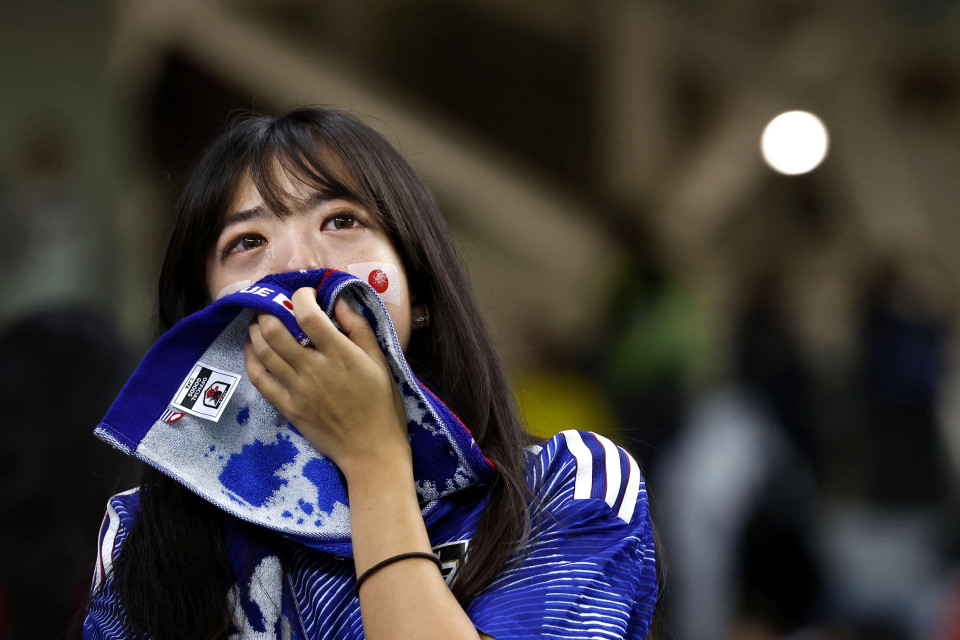 A Japan supporter looks dejected after Japan's 3-1 penalty shootout defeat to Croatia in a World Cup round of 16 football match at Al Janoub Stadium in Al Wakrah, Qatar, on Dec. 5, 2022. (Kyodo)

Samurai Blue can mix it with best

While the 2022 World Cup squads of Germany and Spain might not have had the intimidation factor of their title-winning predecessors, they possessed no shortage of world-class talent and were rightly considered favorites to advance from Group E.

By beating both giants to top the group, and going to the wire against 2018 runners-up Croatia, the Samurai Blue showed they can challenge the sport's elite nations when they execute their game plan.

Japan has future core in place

Manager Hajime Moriyasu picked a relatively inexperienced squad, with 19 of the 26 traveling to their first World Cup, but several of the debutants rose to the occasion on the sport's biggest stage.

Freiburg's Ritsu Doan scored in both of the thrilling 2-1 comeback wins against Germany and Spain, while Brighton's Kaoru Mitoma looked like a game-changer whenever he entered the fray.

Along with Ao Tanaka, who netted the winner against Spain, defensive stalwart Takehiro Tomiyasu and starlet Takefusa Kubo, Japan has a more-than-promising crop of younger players to cultivate before the next World Cup.

Both Croatia and Japan came into their last-16 clash knowing firsthand that penalty shootouts can make or break World Cup dreams.

Japan's 2010 campaign in South Africa ended from the spot against Paraguay in the last 16, while Croatia won both of their previous shootouts en route to the final in Russia four years ago. The Balkan side maintained their perfect shootout record with a massive helping hand from the Samurai Blue, who sent three of their four attempts into the gloves of Dominik Livakovic.

The Japan manager may not ooze charisma or command the media like some of his international counterparts, but he has shown plenty of strategic smarts in marshaling the historic wins over Germany and Spain, as well as Monday's near miss against Croatia.

Rumors have already begun to swirl that he may be replaced by Argentina's Marcelo Bielsa, but the Japan Football Association has not ruled out retaining the 54-year-old incumbent.

In Qatar, the players bought into his system and blueprint, giving him stature to carry forward into the next World Cup cycle, should he have the opportunity.

While most of Japan's current players ply their trade in Europe, the squad's domestic contingent passed the test against the world's best.

Kawasaki Frontale's Shogo Taniguchi was rock-solid when called upon to start at center-back, while Shimizu S-Pulse keeper Shuichi Gonda gave a match-winning performance between the posts against the might of Germany.

While fullbacks Yuto Nagatomo and Hiroki Sakai recently returned to the J-League from Europe, they were able to show that the move was not a backward step in terms of their international careers.