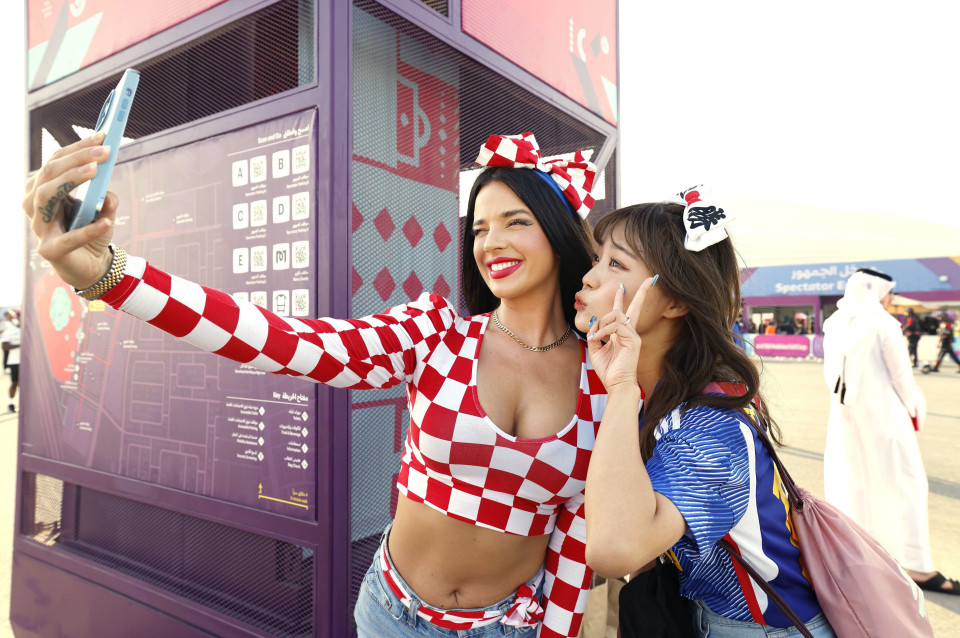 Japan and Croatia supporters take a selfie near Al Janoub Stadium in Al Wakrah, Qatar, on Dec. 5, 2022, ahead of a World Cup round of 16 football match between the two countries. (Kyodo) ==Kyodo

AL WAKRAH, Qatar - Croatia broke Japanese hearts with a 3-1 win on penalties following a 1-1 deadlock at the end of extra time in the World Cup round of 16 on Monday, ending the Samurai Blue's bid to reach the quarterfinals of the tournament for the first time.

Saved penalties from Takumi Minamino and Kaoru Mitoma put Japan in a hole to start the shootout, with a further futile attempt by captain Maya Yoshida sinking their hopes of advancing.

BEIJING - China held a memorial service Tuesday for Jiang Zemin, a former president who died last week at the age of 96, with the general public instructed to watch a live broadcast of the ceremony to pay tribute to the former Communist Party chief.

Senior party members, as well as government and military officials, were among the participants of the memorial, held at the Great Hall of the People. Jiang is credited for guiding China's rapid rise to major-power status as party leader between 1989 and 2002.

TOKYO - The government said Tuesday it will look into child mistreatment cases at nurseries across the country and how municipalities have handled them, following the arrest of three nursery teachers in central Japan for allegedly abusing toddlers.

The case at the nursery in Susono, Shizuoka Prefecture, which also highlighted the municipality's tardy disclosure and the nursery head's alleged coverups, is "extremely regrettable" and "should not have happened," health minister Katsunobu Kato told a press conference.

BEIJING - North Korea's military has fired artillery shells into the sea off the country's east coast in response to the firing of rocket launchers by South Korea in joint drills with the United States, South Korean military sources said Tuesday.

The firing of several dozens of rounds from Kangwon Province follows similar shelling by the North the previous day and further heightened border tensions as live-fire drills by the South Korean and U.S. militaries continue near the inter-Korean border.

Collaboration between the manufacturer, set up by eight major Japanese companies, and Interuniversity Microelectronics Centre, also known as Imec, will give rise to a global alliance amid intensifying competition in the computer chip-making industry.

TOKYO - Fans and supporters extended their appreciation and encouragement to Japan's soccer players on Tuesday after they exited the World Cup in a stinging shootout loss to Croatia.

While the Samurai Blue were unsuccessful in their bid to reach the quarterfinals of the tournament for the first time, many people were hopeful of the team's future after earlier witnessing strong performances including thrilling comeback wins against giants Germany and Spain.

TOKYO - The mother of Hana Kimura, a former cast member of the popular reality show "Terrace House," said Tuesday she has filed a lawsuit against the program's Japanese broadcaster and two other companies, claiming her daughter committed suicide because of the show.

In the suit filed at the Tokyo District Court, Kyoko Kimura is seeking around 142 million yen ($1 million) in compensation from the three companies including Fuji Television Network Inc., alleging they produced the TV show in such a way that viewers would dislike her daughter.

The figure, up five percentage points from the previous fiscal year, surpassed the government's target of raising the ratio of men taking such leave to 30 percent by 2025, Taro Kono said at a press conference.