Japan's top court on Thursday dismissed an appeal by the Okinawa prefectural government to halt landfill work for the relocation of a key U.S. base within the southern island prefecture.

The Supreme Court's decision upheld lower court rulings in which Okinawa's cases against the central government were dismissed.

Okinawa had challenged the legality of the then land minister's decision in 2019 to authorize the landfill work to build a replacement facility for U.S. Marine Corps Air Station Futenma. 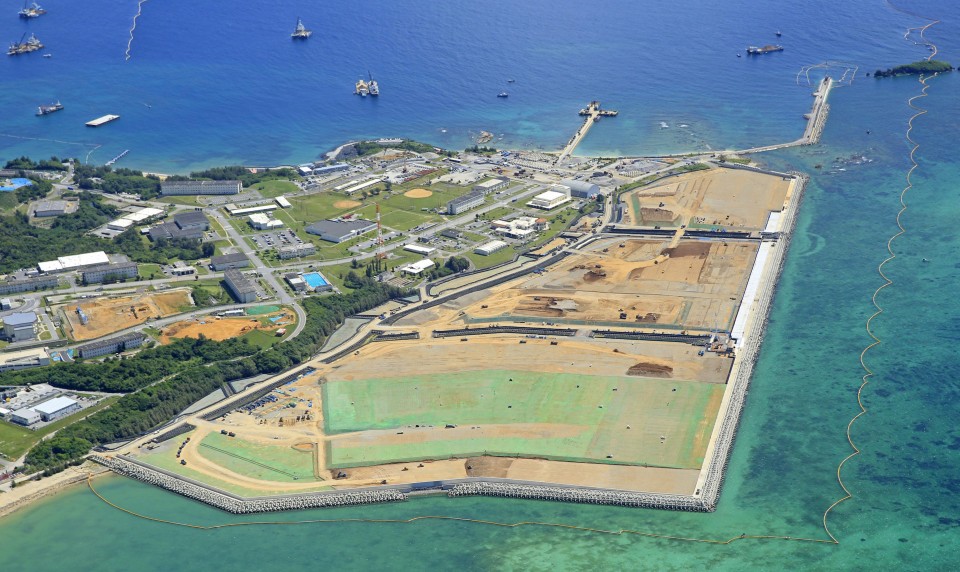 Photo taken from a Kyodo News airplane on Aug. 16, 2022 shows the coastal area of Henoko in Nago, Okinawa Prefecture, where work is progressing as the relocation site for U.S. Marine Corps Air Station Futenma. (Kyodo)

The Supreme Court said that the approval for the work is a legally entrusted task of the central government and that prefectures cannot file a lawsuit to revoke it.

Just as the Naha District Court did in November 2020 and the Fukuoka High Court's Naha branch in December 2021, the top court did not indicate whether it was valid for the land ministry to nullify the prefectural government's decision to retract its permission for the landfill work.

Okinawa and the central government have long been at odds over relocating the Futenma base from a crowded residential district in Ginowan to the less densely populated Henoko coastal area of Nago.

Residents in Okinawa, which hosts the bulk of the U.S. military's facilities in Japan, have opposed the relocation, complaining about accidents and crime linked to the U.S. military presence, noise and environmental degradation.

The relocation plan was agreed upon between Tokyo and Washington in 1996 under a deal that returned the land occupied by the airfield. Henoko was chosen as the location in 1999.

Then-Gov. Hirokazu Nakaima, who was generally more supportive of the base relocation, approved the landfill work in the Henoko area in 2013. But legal and political wrangling ensued over the years, when his successor Takeshi Onaga, a fierce opponent to the plan, rescinded the approval in 2015 by citing legal defects in Nakaima's decision. The Supreme Court, however, ruled in favor of the central government the following year, allowing for the resumption of the work.

In 2018, the prefecture retracted permission for such work again, citing weak ground discovered in the planned reclamation site.

In 2019, the then land minister, Keiichi Ishii, invalidated Okinawa's retraction of the plan.

Chief Cabinet Secretary Hirokazu Matsuno welcomed the top court's decision, indicating that the government will move ahead with the planned relocation.

Matsuno said the government will continue to work to "realize the full return of Futenma Air Station, which is said to be the most dangerous in the world, without further delay," while seeking local consent.

The current governor, Denny Tamaki, called the court's ruling "extremely regrettable" and "impossible to agree with."

The prefecture constitutes around 0.6 percent of Japan's total land area but hosts around 70 percent of U.S. military installations in the country by acreage.

Tokyo has said that the relocation to Henoko is the only option to remove the dangers posed by the Futenma base because of its current location, while maintaining defense security under the long-standing Japan-U.S. security alliance.

Okinawa is of strategic importance to both Japan and the U.S., given China's expanding presence and North Korea's missile and nuclear threats.