The panel of 15 members, including academics and the heads of municipal governments, will draw up its final report regarding the foreign technical intern program and the specified skills worker system -- the former in particular coming under scrutiny due to accounts of physical abuse and withholding pay -- around fall 2023.

The cases have sparked criticism at home and abroad that the technical intern program is a means for companies to import cheap labor rather than passing skills to developing nations.

"They think that since we come from poor countries, they can expect us to work under any circumstances," said Doan Thi Thu Nga, a 32-year-old Vietnamese trainee who worked for a sewing company for around three years in Ehime Prefecture, western Japan. 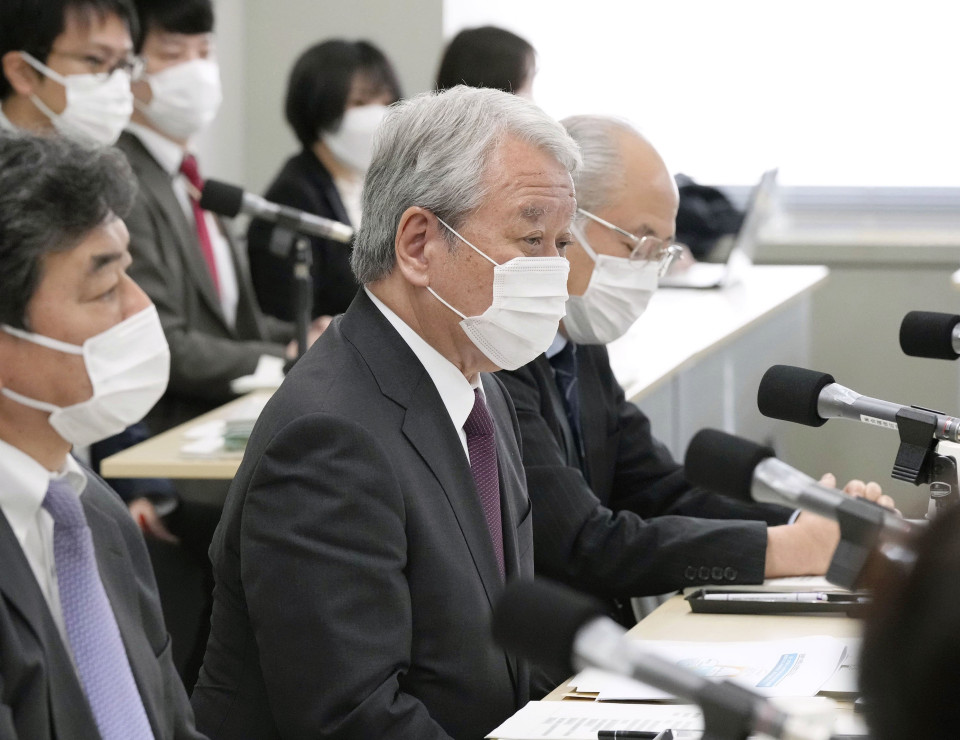 Akihiko Tanaka (C), chair of a government panel tasked with reviewing Japan's foreign trainee program, delivers his opening remarks at the panel's first meeting at the Justice Ministry in Tokyo on Dec. 14, 2022. (Kyodo)

Nga said her pay was withheld and she frequently logged over 100 hours of overtime a month, an illegally high amount.

The panel members including its chairman Akihiko Tanaka, president of the Japan International Cooperation Agency, the country's foreign aid arm, will discuss such possible measures as replacing the schemes with new ones.

"We intend to examine a system that will realize our three visions of safety, diversity and the respect of individuals and their rights," Tanaka said at the start of the meeting.

The Justice Ministry held study sessions ahead of the panel meeting in which the foreign technical intern program, in particular, was discussed. It was pointed out that the lack of information sharing between trainees and employers prior to starting the internships has sometimes led to discrepancies in wages to be paid and skills to be learned.

The panel also said individuals can sometimes have no one to turn to when mistreated, for reasons including indebtedness from expenses accrued to enter Japan and rules against changing employers.

Nga said she was hesitant to file a claim for her unpaid wages for fear of losing her job, but in August this year ended up consulting a support group as her visa expiration date was approaching.

After labor standard inspectors called on Nga's company to take action to rectify the problem, the firm last month told her and 10 other colleagues that they would receive their withheld wages. But shortly afterward, they were informed of the company's bankruptcy and that payment is difficult.

"It's irresponsible," Nga said. "This is discrimination against foreigners."

The sessions saw a mix of opinions ranging from benefits for the trainee program to calls for it to be scrapped. The expert panel is now looking at a range of responses, such as unifying the two schemes, establishing a body to oversee the acceptance of interns, and reviewing operations at the Organization for Technical Intern Training.

Japan introduced the training program for foreigners in 1993, primarily for the agriculture and manufacturing sectors, with trainees permitted to work for up to five years.

The scheme for specific work skills was established later in 2019 to address labor shortages, such as in the construction industry and the nursing sector.

In 2017, a law designed to strengthen the supervision of companies accepting foreign nationals working under the government trainee program took effect, with plans to review its operations five years after enforcement.

But the apparent violations have continued. Under the new law, 37 supervising organizations and 358 trainee workplaces have had their licenses or certifications revoked.

"The salaries are low and there are human rights violations. Japan is no longer a 'country of choice' for foreigners," a senior official of the Immigration Services Agency said.

As of the end of June, there were around 328,000 people residing in Japan as technical trainees and about 87,000 as specified skills workers, according to the agency.

"The government bears a heavy responsibility for not facing the problem head-on, and it is unacceptable to evade such issues with trivial alterations," Shoichi Ibusuki, a lawyer who is well-versed in matters concerning trainees, said of the program review.

"The system should be abolished and drastically redesigned to properly accept foreign workers," he said.