Japan and Australia pledged Friday to beef up defense cooperation as the regional security environment has worsened amid China's rapid military buildup in the Indo-Pacific.

During a gathering in Tokyo, Prime Minister Fumio Kishida also agreed with Australian Defense Minister Richard Marles and Foreign Minister Penny Wong that the two U.S. security allies will deepen cooperation in the fields of natural resources and energy.

Kishida held talks with Marles, who doubles as deputy prime minister, and Wong, the Japanese Foreign Ministry said, as China is trying to bolster its military clout and challenge the regional influence of the United States.

The three shared the view that Japan and Australia "need to lead efforts toward the realization of a free and open Indo-Pacific," referring to a vision that Japan has been promoting along with the United States as an apparent counter to Beijing's rise. 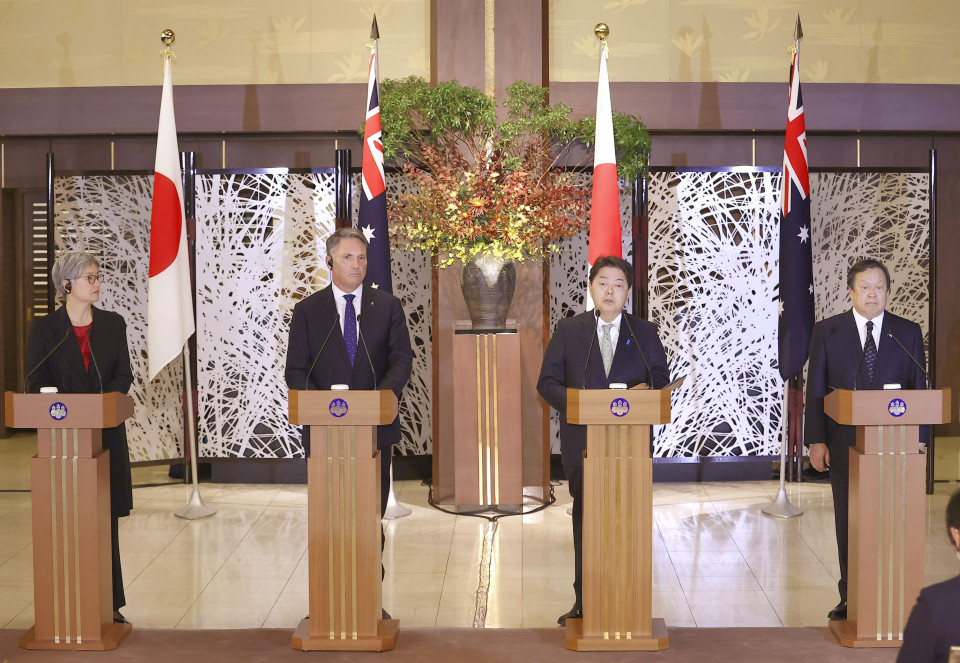 At the meeting, the four ministers agreed on their opposition to any attempts to unilaterally change the status quo by force in the East and South China seas, Hayashi told the press, without explicitly referring to China.

It was the two nations' first in-person "two-plus-two" talks since October 2018. Tokyo and Canberra last had a similar gathering virtually in June last year.

The foreign and defense ministers also confirmed that Japan and Australia should boost their diplomatic cooperation with countries in Southeast Asia and Pacific regions, according to Hayashi.

In October, Kishida and his Australian counterpart Anthony Albanese, who took office in May, issued a joint declaration on security cooperation when they met in the western Australian city of Perth.

In the declaration, the leaders reaffirmed the "vital special strategic partnership" between the two countries while reiterating their commitment to realizing a "shared vision for a free and open Indo-Pacific region that is inclusive and resilient."

Japan and Australia are part of the four-way security framework known as the Quad, which also involves the United States and India, as the nations have been seeking to form a united front against Beijing's growing military and economic assertiveness in the region.