Japanese Prime Minister Fumio Kishida seems hopeful that his ruling party's wins in a spate of local elections in April and a successful Group of Seven summit in Hiroshima in May will help improve his battered political strength.

In recent months, the approval ratings for Kishida's Cabinet have shown few signs of recovering, even sparking speculation that he will dissolve the House of Representatives for an election within 2023 in a desperate bid to seek a fresh mandate from voters. 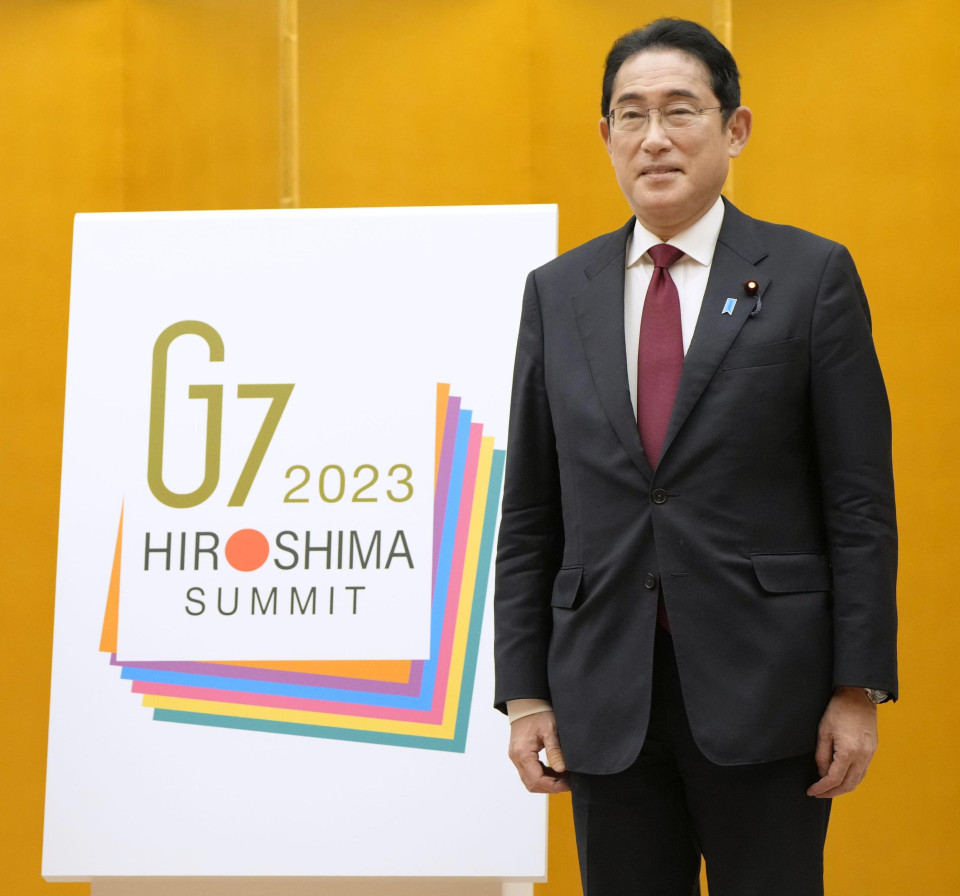 Japanese Prime Minister Fumio Kishida stands with the logo for a summit of the Group of Seven industrialized nations in Hiroshima in May, at the premier's office in Tokyo on Dec. 21, 2022. The logo, created by designer Keiichi Kusano, was selected for the summit the same day. (Kyodo) ==Kyodo

Some political analysts are skeptical about whether Kishida, a lower house lawmaker who represents Hiroshima, would still be prime minister by the time the summit takes place in the western Japan city destroyed by a U.S. atomic bombing in August 1945.

On July 10, Kishida's ruling Liberal Democratic Party scored a victory in the House of Councillors election, which was held just two days after former Prime Minister Shinzo Abe, who used to lead the LDP, was fatally shot during a campaign speech.

The LDP's triumph in the upper house election appeared to give Kishida what has been dubbed a "golden three years," with steady government, free of national elections unless he were to dissolve the lower house.

Nevertheless, the assassination of Abe, Japan's longest-serving prime minister, by the son of a follower of the infamous religious group the Unification Church, has eventually exerted a negative impact on the fate of the Kishida administration.

In the wake of the death of Abe, who maintained his political influence as head of the LDP's largest intraparty faction even after resigning as premier, suspicious ties between the ruling party and the Unification Church, often labeled a cult, have come to light.

Although opinion on Abe's legacy is divided due to allegations he abused his power for personal gain, Kishida held a fully taxpayer-funded state funeral for the former leader in September without Diet deliberations, triggering a strong backlash from the public.

Moreover, some ministers have been forced to resign since October due to close links to the Unification Church, gaffes or political funds-related scandals, exacting a heavy toll on Kishida's government.

In the latest survey by Kyodo News in December, the support rate for Kishida's Cabinet stood at 33.1 percent, the lowest level since its launch in October 2021, nearing what is widely seen as the "danger level" of 30 percent.

Once the regular parliamentary session begins in January, the Kishida administration will likely face challenges, with the opposition bloc ready to resume their offensive against scandal-tainted ministers and LDP members.

An idea is being floated to replace several government members who might be caught up in scandals before the start of the Diet session, government sources said.

But Masahiro Iwasaki, a political science professor at Nihon University, said Kishida would not carry out a large-scale Cabinet reshuffle, which would be the first since August, as it could pose a high risk.

Kishida is apparently "fed up with picking dangerous figures," the professor said.

In the spring, local elections, including those for governors, mayors and assembly members, are slated to be held across the country in a test for Kishida.

Should the LDP fail to garner public support in the elections, Kishida would surely lose his political clout and calls for him to step down would grow, jeopardizing his chance at achieving his cherished goal of chairing the G-7 summit in Hiroshima, pundits said.

Once through the local elections, held every four years, the G-7 summit in Hiroshima, scheduled for three days from May 19, will be the highlight of Kishida's political calendar in 2023.

Kishida is eager to pitch his vision of a "world without nuclear weapons" at the international gathering, believing that a successful G-7 summit might boost his popularity to some extent by giving the impression that he has a major hand in foreign affairs.

If the G-7 summit ends successfully, Kishida may be inclined to dissolve the lower house for a general election while the mood is upbeat, political experts said.

Shinichi Nishikawa, a political science professor at Meiji University, said Kishida is no longer in his "golden three years" and would be compelled to call an election by the end of 2023 before his administration "sinks."

Nihon University's Iwasaki, meanwhile, said Kishida, whose tenure as the LDP president is scheduled to last until September 2024, would not dare risk losing his party's seats in parliament if the approval ratings rebound from the current level.

Without "clear reasons" to replace him, Kishida might remain as prime minister during 2023, Iwasaki added.

One factor that may deal a crushing blow to Kishida is his abrupt proposal to raise taxes to finance an envisioned expansion of Japan's defense spending, which has already increased public distrust of his government.

Senior lawmakers, who were close to Abe, have cast a critical eye on Kishida's plan while urging the government to issue national bonds to cover the defense expenses instead of hiking taxes -- an idea the former prime minister advanced.

Among Cabinet members, Sanae Takaichi, economic security minister, publicly lambasted Kishida, saying in a Twitter post that she did not understand the premier's "true intention."

In December, the ruling camp approved the plan to raise taxes to fund the defense spending but shied away from referring to when the measure will be conducted amid the turmoil caused by Kishida.

The controversy over tax hikes could become a source of intraparty conflict, possibly prompting ruling lawmakers to attempt to oust Kishida, the experts said.