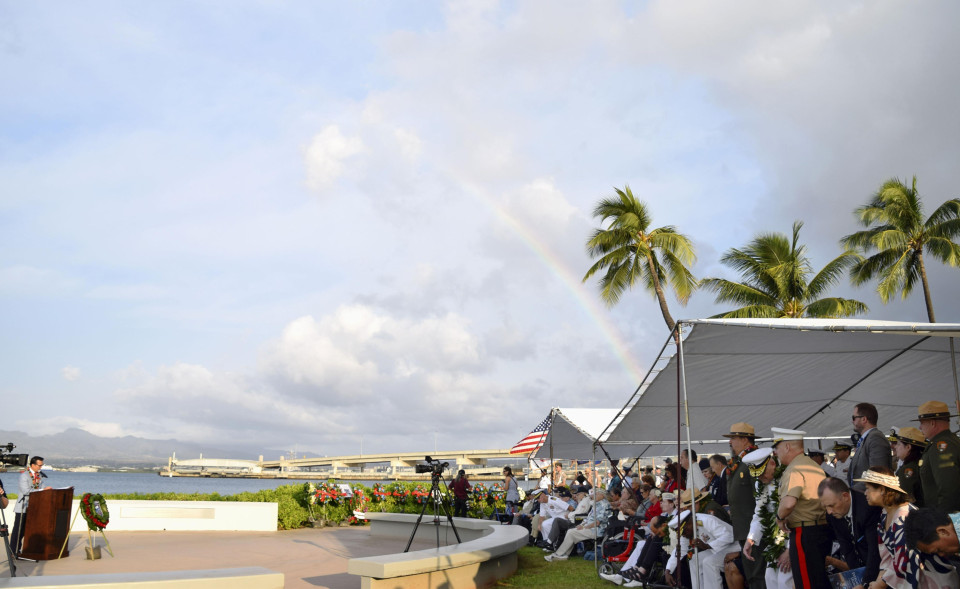 A rainbow arches across the sky during a ceremony commemorating the 81st anniversary of Japan's attack on Pearl Harbor in Honolulu on Dec. 7, 2022. (Kyodo) ==Kyodo

TOKYO - Japan, Britain and Italy said Friday they will jointly develop a next-generation fighter jet by 2035 in Tokyo's first such defense cooperation with countries other than the United States, a key security ally.

The countries' leaders said in their joint statement that they will "build on our long-standing defense relationship" through the fighter development program, which will "accelerate our advanced military capability and technological advantage," as well as further strengthen their supply chains and defense industrial base.

TOKYO - Twenty-two officers at a central Japan prison repeatedly assaulted inmates from November last year to this August by spraying their faces with alcohol and hitting them on their buttocks with sandals, the Justice Ministry said Friday.

The three inmates who were assaulted at Nagoya Prison were men in their 40s, 50s and 60s, with the oldest suffering an injury near his left eyelid that took five days to heal, according to the ministry.

TOKYO - A government panel on Friday proposed that Japan double the budget for its official development assistance over the next decade as the country prepares to revise its foreign aid charter next year.

In a proposal presented to Foreign Minister Yoshimasa Hayashi, the panel of experts said the government should "set a clear deadline for achieving" the target, such as increasing the ODA budget to 0.7 percent of gross national income from the current 0.34 percent in the next 10 years, under a revised development cooperation charter.

Baseball: Japanese slugger Murakami to be posted to MLB after 2025

TOKYO - The Yakult Swallows' record-breaking slugger Munetaka Murakami will be posted to the major leagues after the 2025 season.

The 22-year-old third baseman, who became Japan's youngest Triple Crown winner in 2022, signed a three-year deal worth an estimated 600 million yen ($4.4 million) per year with the Central League club on Friday.

TOKYO - Rakuten Mobile Inc. was instructed by the Japanese government on Friday not to repeat the massive disruptions of its mobile phone services and data transmission seen in September.

Some 110,000 people were affected by the phone service failures and 1.3 million people were hit by the data transmission disruption, caused by a software malfunction in equipment at a data center. The Ministry of Internal Affairs and Communications inspected the data center the following month.

TOKYO - Japan's Empress Masako, on the occasion of her 59th birthday Friday, reflected on having spent exactly half of her life in the imperial family since marrying Emperor Naruhito in June 1993, saying she felt "deeply moved" by her years as royalty.

"I have gone through many times of joy, as well as times of sorrow. I would like to express my heartfelt gratitude to the emperor and many others who have supported and watched over me every step of the way," the empress said in a statement released by the Imperial Household Agency.

TOKYO - Japanese billionaire entrepreneur Yusaku Maezawa said Friday K-pop artist Top and American DJ Steve Aoki will be among the eight crew members who will join him on a private space trip to orbit the Moon in 2023.

Maezawa, who became the first Japanese civilian to travel to the International Space Station last year, revealed on Twitter and on a website the names of people with whom he will journey as part of the "dearMoon" project. They will ride on a spaceship being developed by U.S. firm SpaceX.