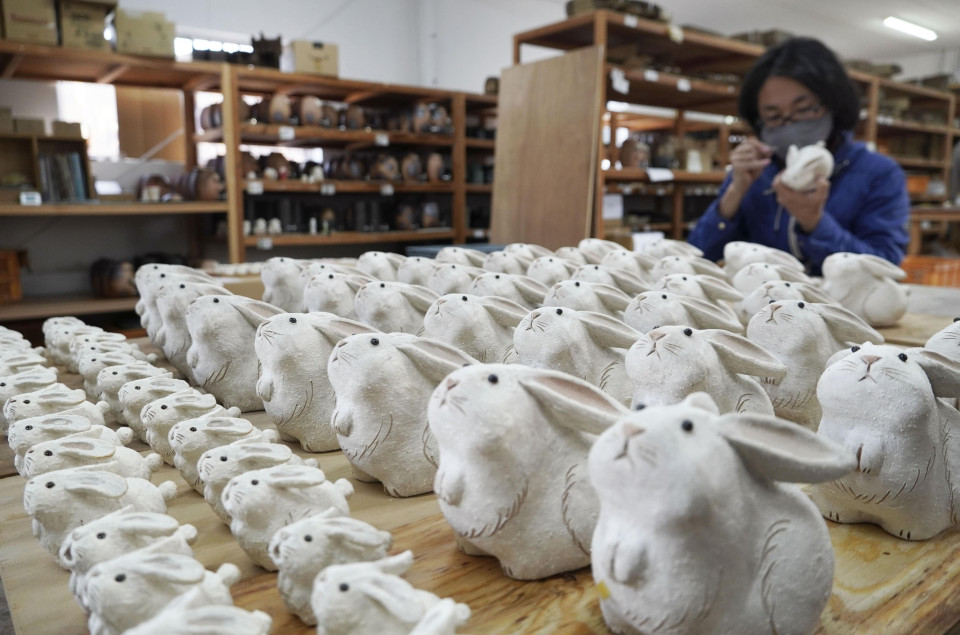 Rabbit ceramic figurines are lined up at a Shigaraki ware pottery in Koka in Shiga Prefecture, central Japan, on Nov. 28, 2022, as production of the figurines reach its peak in preparation for the Year of the Rabbit in 2023 under the Chinese zodiac. (Kyodo)

TOKYO - Japan's lower house on Thursday passed a bill to ban organizations from maliciously soliciting donations, following controversy over the fundraising practices of the Unification Church.

After deliberations at the House of Councillors, or upper house, starting in the afternoon, the bill is likely to be enacted in favor of the ruling bloc and some opposition parties on the final day of the extraordinary parliamentary session on Saturday.

TOKYO - Japan's top court on Thursday dismissed an appeal by the Okinawa prefectural government to halt landfill work for the relocation of a key U.S. base within the southern island prefecture.

The Supreme Court's decision upheld lower court rulings in which Okinawa had cases against the central government dismissed.

TOKYO - Japan national soccer team manager Hajime Moriyasu on Thursday expressed gratitude to people in the country for their support during the World Cup in Qatar, when he met with Prime Minister Fumio Kishida.

During his meeting with the team at the prime minister's office, Kishida praised the Samurai Blue, who defeated former champions Germany and Spain in the group stage, saying their achievements "stunned the world and gave courage to many fans."

BEIJING - A significant easing of China's stringent "zero-COVID" policy announced Wednesday amid the continued spread of the coronavirus has triggered confusion and anxiety among the public, with cold medicines flying off the shelves and health authorities no longer tracing positive cases.

The relaxed steps include allowing those with no or mild symptoms of COVID-19 to be quarantined at home instead of at designated facilities, boosting demand for medication.

GENEVA - The World Health Organization said Thursday that malaria infections worldwide continued to increase in 2021 from a year earlier, mainly in Africa, although it grew at a slower pace.

Neither malaria cases nor deaths sharply rose in 2021, unlike in the first year of the coronavirus pandemic, the WHO said. Global deaths from the disease stood at an estimated 619,000 in 2021, slightly down from the previous year's 625,000.

WASHINGTON - The United States on Wednesday welcomed Japan's plan to significantly increase its defense spending in the next five years in the face of "acute" security challenges in the region, and signaled support for any decision that would help beef up its deterrence in dealing with China's assertiveness.

"The more Japan is very confident of defending itself is a good thing for offsetting PRC (People's Republic of China) ambitions," U.S. Marine Corps Commandant Gen. David Berger said, when asked about Japan's moves toward deciding to develop long-range strike capabilities that it has so far opted not to acquire under its war-renouncing Constitution.

Real gross domestic product, adjusted for inflation, shrank 0.2 percent on a quarterly basis, revised upward from minus 0.3 percent. After the Cabinet Office revised past data, the world's third-largest economy marked its first shrinkage in two quarters, instead of four quarters.

OSAKA - A Japanese court on Thursday sentenced a man to three years in prison, suspended for five years, for damaging a building of an international school in Osaka Prefecture, in what is widely seen as a hate crime.

The Osaka District Court found Makoto Tachikawa, 30, guilty of trespassing into the Korea International School, attended by students including Korean residents in Japan, in the western Japan city of Ibaraki in April, and setting a floor of its building on fire.

The current account balance, one of the widest gauges of international trade, turned red in the reporting month from a 1.73 trillion yen surplus a year earlier, marking the sharpest drop on record, according to the ministry's preliminary data.

TOKYO - The land ministry said Thursday it would be difficult to decide by the end of the year whether to approve proposals by Osaka and Nagasaki prefectures to host casino resorts, in a move that could delay their planned openings in 2029 and 2027, respectively.

The city of Osaka and Osaka Prefecture in western Japan and Nagasaki Prefecture in southwestern Japan are seeking to host so-called integrated resorts, comprising a large hotel, conference rooms and gambling areas, assuming gaining approval sometime after fall this year and Oct. 1, respectively.