Manager Hajime Moriyasu said he had flashbacks to the infamous "Tragedy of Doha" in the final minutes of Japan's dramatic 2-1 World Cup defeat of Spain in Qatar on Thursday, but was heartened by the knowledge his players were unburdened by history.

Moriyasu played in that fateful game now part of Japanese soccer folklore, a 2-2 draw with Iraq in 1993 which saw the Samurai Blue fall short of making their World Cup debut the following year on goal difference.

But the youthful squad currently in Qatar carry none of the baggage that has weighed upon a generation of Japanese players and fans, the former Sanfrecce Hiroshima manager said, allowing them to play freely on their way to a round-of-16 berth.

"About one minute before the end (of the game against Spain), I remembered the Tragedy of Doha, but exactly at that moment the players came aggressively for the ball and I could feel the times have changed," Moriyasu said. 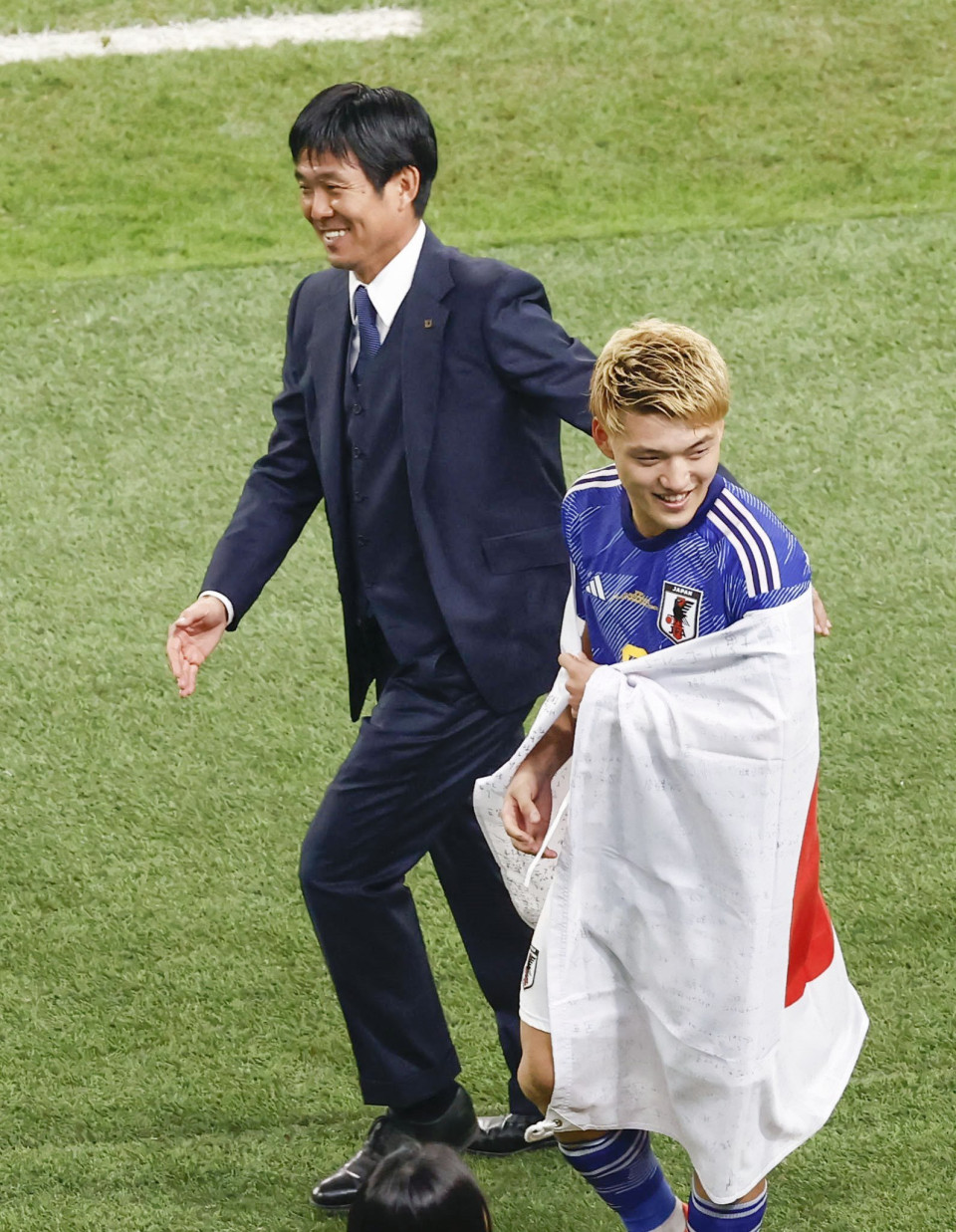 Japan manager Hajime Moriyasu (L) and Ritsu Doan are all smiles after the team's 2-1 win over Spain in a World Cup Group E match at Khalifa International Stadium in Doha, Qatar, on Dec. 1, 2022. (Kyodo)

"The players are playing in a new age, new football. That is how I felt."

Japan's physical and mental fortitude has allowed them to survive what looked like certain defeats twice at this World Cup, coming from behind to slay both Germany and Spain.

The wins bookended an upset loss to underdogs Costa Rica that had put the Samurai Blue's World Cup survival on the line against Spain, but they came through in style.

In post-game remarks, Ao Tanaka, scorer of Japan's 51st-minute winner on Thursday night, reflected the faith that the 54-year-old Moriyasu has shown in his players. 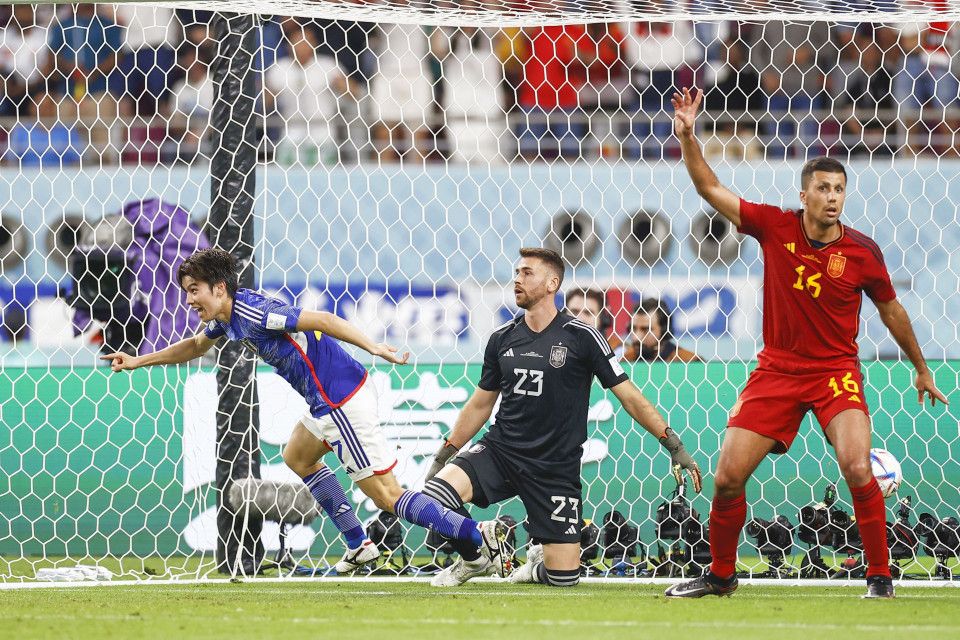 "We lost the last game and there might have been a sense of resignation (outside the camp) but we always believed," the Fortuna Dusseldorf midfielder said.

Moriyasu has managed to conjure his team's two wins at this World Cup by relying on his players' composure under fire, backing them to keep fighting when the odds looked stacked against them.

Tanaka's goal, scored off a pullback from substitute Kaoru Mitoma which stayed within the byline by mere millimeters, was the embodiment of that ideal.

"Concerning (Tanaka's) goal, we were just playing to win. We think that our intent materialized as a goal," Moriyasu said post-game. 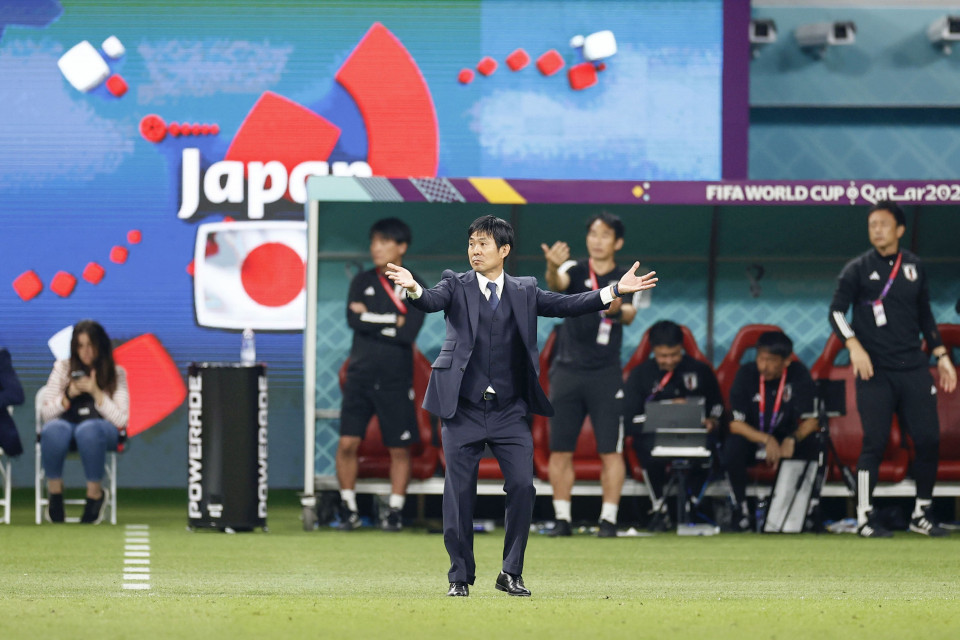 Japan manager Hajime Moriyasu gives his team instructions during the second half of a World Cup Group E match against Spain at Khalifa International Stadium in Doha, Qatar, on Dec. 1, 2022. (Kyodo)

"Whether the ball was out or not, there is great technology nowadays for big football (games) and if it was really out it would have been a goal kick. But the judgment of the referee was that it was in and we respected that."

"Two days before the match we had a different plan. But during training we confirmed a few things," he said. "The players gave me ideas and I myself was not set on the tactics."

"In yesterday's training session, we confirmed an option and that was implemented today. That is how things worked."

"So, even when we conceded a goal, we decided we were going to defend and counterattack and a few players could do this. So the choices were a collective decision," he said.