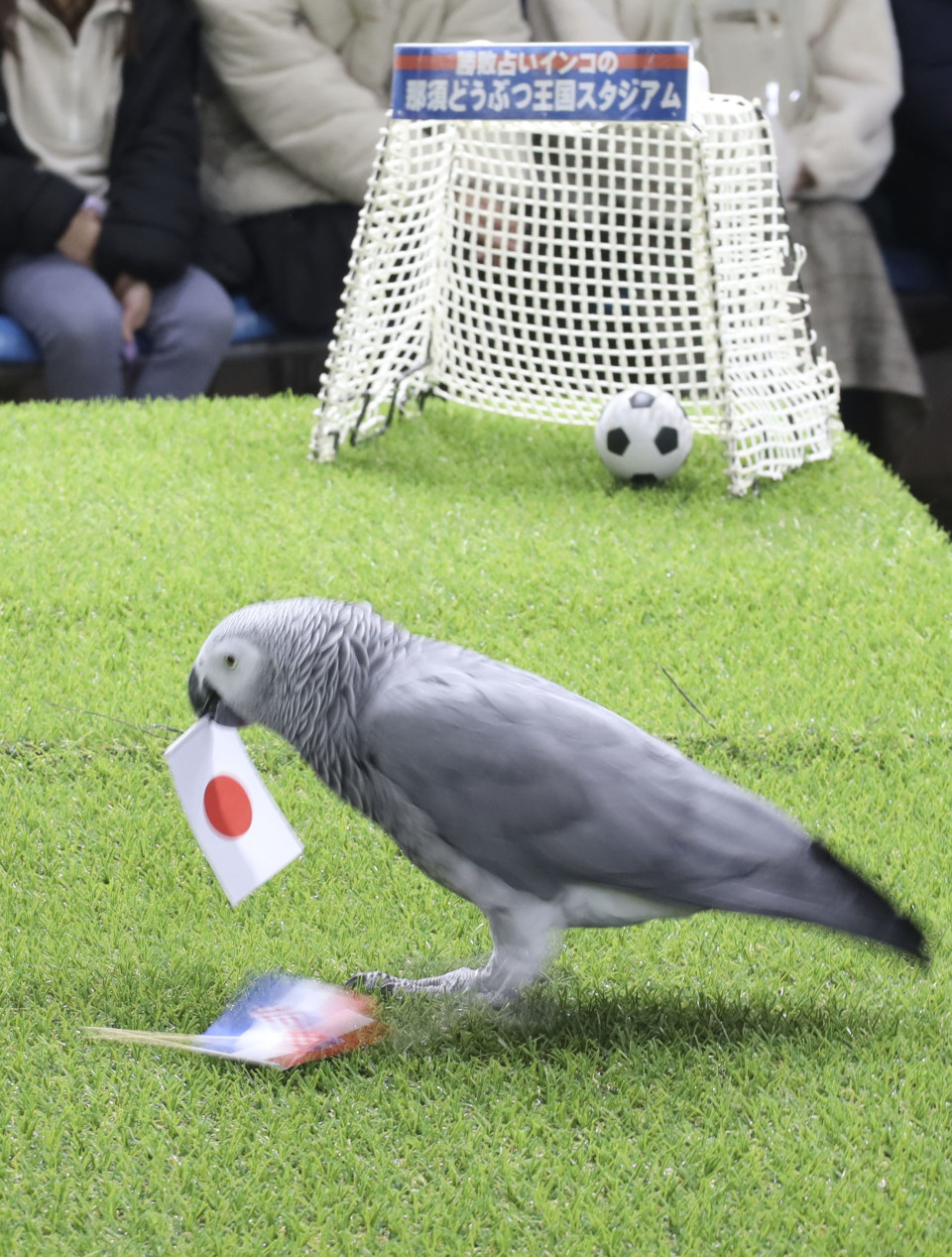 Parrot Olivia picks up a tiny Japanese flag at an event held at Nasu Animal Kingdom in Tochigi Prefecture, eastern Japan, on Dec. 4, 2022, to predict the winner of the upcoming World Cup round of 16 football match between Japan and Croatia. (Kyodo) ==Kyodo

TOKYO - Japan is considering almost tripling the number of units in its Self-Defense Forces equipped with ballistic missile interception capabilities in the country's remote southwestern islands by the end of fiscal 2031, a draft of the plan has shown.

The plan is expected to be included in the government's National Defense Program Guidelines, a 10-year defense buildup policy to be updated by the end of the year, as the nation focuses on boosting its defense capabilities in southwest Japan, a strategically important area in light of the Chinese military's muscle-flexing in the East China Sea.

WASHINGTON - A price cap on Russian crude oil agreed by the Group of Seven nations and Australia took effect Monday in the latest effort to squeeze Moscow's key source of revenue for its ongoing war in Ukraine.

The price cap was set at $60 per barrel by the G-7 members -- Britain, Canada, France, Germany, Italy, Japan and the United States, plus the European Union -- and Australia as they seek to punish Russia while not triggering major supply disruptions. But Moscow could retaliate by reducing supplies, possibly destabilizing markets.

The figure is up from around 27.47 trillion yen that Japan had originally planned for five years through the fiscal year from April 2023, in view of the deteriorating regional security environment amid mounting security threats from China and North Korea.

SHIZUOKA, Japan - The central Japan city of Susono on Monday filed a criminal complaint accusing the head of a nursery school of trying to cover up the alleged abuse of toddlers in its care, the city's mayor said.

The complaint against school head Toshihiko Sakurai came as three female former teachers were sent to prosecutors Monday by police after being arrested Sunday on suspicion of committing abuses in June such as hitting toddlers and hanging them upside down by their feet.

SEOUL - South Korea's military said Monday it detected North Korea firing about 130 artillery shells off its east and west coasts in a violation of a 2018 inter-Korean agreement designed to reduce border tensions.

The Joint Chiefs of Staff said the shots were fired from about 2:59 p.m. from Kangwon Province and South Hwanghae Province areas toward the Sea of Japan and Yellow Sea, respectively.

The "Atto 3" sport utility vehicle will retail for 4.4 million yen ($32,600) from Jan. 31, BYD Japan Co. said, with deliveries of the vehicles expected to begin around March. The firm says it will progressively roll out sales bases for the cars across the country starting late January.

Figure skating: Hanyu to perform at Tokyo Dome next Feb.

HACHINOHE, Japan - Yuzuru Hanyu will become the first figure skater ever to have a solo ice show at Tokyo Dome, one of Japan's biggest entertainment venues.

The two-time Olympic gold medalist said Monday his next ice show, called "Gift," will be held there on Feb. 26.

TOKYO - Japan's public broadcaster NHK said Monday it has decided to name Nobuo Inaba, former executive director of the Bank of Japan, as its president.

Inaba, 72, will replace incumbent Terunobu Maeda, former chairman of Mizuho Financial Group Inc., on Jan. 25 for a three-year term. Since 2008, NHK has had five former private company executives in a row as its president.

SHIZUOKA, Japan - A former principal of a kindergarten in Shizuoka Prefecture, central Japan, was referred to prosecutors on Monday for alleged professional negligence resulting in death after a 3-year-old girl died of heatstroke in a van used by the school three months ago.

Police say that Tatsuyoshi Masuda, 73, who headed Kawasaki kindergarten in Makinohara, was responsible for China (pronounced chee-na) Kawamoto's death on Sept. 5, after she was left behind on the van for about five hours. Three others were also referred to prosecutors over the case.