Japanese Prime Minister Fumio Kishida said Thursday the government plans to raise taxes and secure 1 trillion yen ($7.3 billion) every year from fiscal 2027 to cover a quarter of the additional funding needed for increased defense spending aimed at coping with an array of security challenges.

Kishida, who aims to boost the nation's defense spending to a combined 43 trillion yen in the next five years starting in fiscal 2023, said, however, that the government will not raise income taxes given the severe economic situation surrounding households. Increasing the corporate tax is widely seen as a viable option. 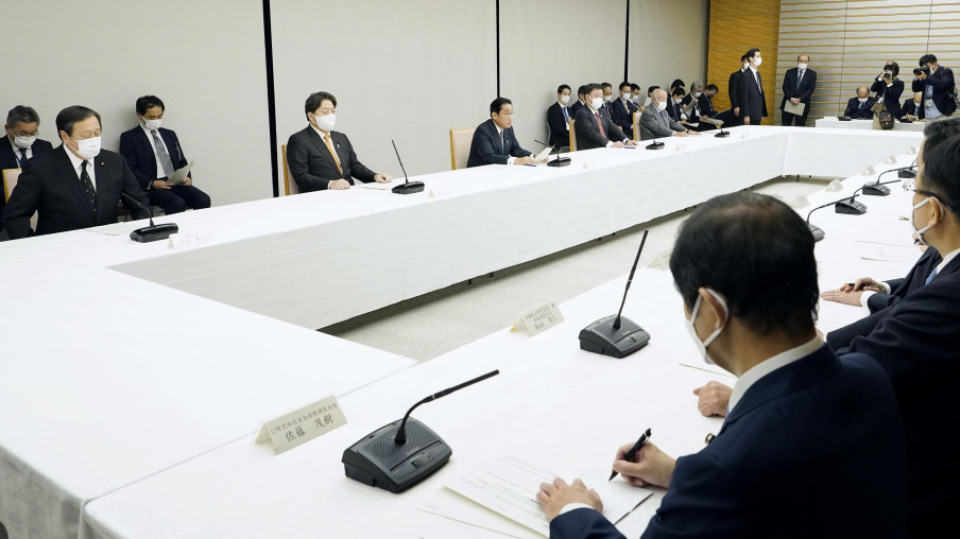 A meeting between the government and ruling party lawmakers is held at the prime minister's office in Tokyo on Dec. 8, 2022. (Kyodo)

Japan has long capped defense spending at around 1 percent of gross domestic product, with approximately 5.4 trillion yen earmarked for the current fiscal year.

Kishida plans to bring that figure to 2 percent by fiscal 2027, requiring Japan to spend a combined 43 trillion yen over the next five years. The amount is a leap from the roughly 27.47 trillion yen under the existing plan for the five years from fiscal 2019.

"It's necessary to secure over 1 trillion yen by (using) tax measures, and we need to ask for cooperation," Kishida said at a meeting between the government and ruling party lawmakers.

Even if the government goes ahead with tax hikes, they will be gradual over multiple years, Kishida said, adding there would be no tax hike in fiscal 2023.

Of the additional 4 trillion yen deemed necessary every year, the government aims to secure 1 trillion yen by imposing higher tax rates and the rest by pushing for spending reform and tapping surplus money and non-tax revenue.

The prime minister asked the tax panels of the Liberal Democratic Party and Komeito to decide when and which tax rates should be targeted, as the ruling coalition is stepping up work to finalize a tax reform plan for fiscal 2023 next week.

The planned increase comes amid calls among conservative lawmakers for reworking the nation's defense posture to address challenges posed by an assertive China, North Korea's missile and nuclear programs and Russia's war against Ukraine.

Japan is also reviewing three key documents on security and defense policy to better reflect the changing security environment that will serve as the rationale for more defense spending. The government will then draw up a state budget for the next fiscal year before year-end.

If implemented as planned, the funding scheme would keep the government from issuing new government bonds to achieve the substantial increase in defense spending, though it still relies on funding sources that are far from sustainable, such as surplus money.

Japan's fiscal health is already the worst among developed nations, and restoring it has taken a backseat amid the COVID-19 pandemic and Russia's invasion of Ukraine, which have clouded the economic outlook.

Some within the ruling LDP have been calling for the issuance of government bonds for more defense spending, while business leaders have voiced concerns about the prospects of a higher tax burden on the corporate sector.

The ruling parties have already agreed on the need for Japan to acquire an enemy base strike capability, a major development for a nation long committed to its exclusively defense-oriented policy.

The United States, the longtime ally of Japan, has welcomed Tokyo's attempt to increase its defense spending at a time when the two nations have been boosting the interoperability of the U.S. military and Japan's Self-Defense Forces. The move, however, has alarmed China.