Takehiro Tomiyasu may be called upon to make a major contribution in Japan's upcoming World Cup round of 16 game versus Croatia with his team's defense weakened by the loss of Ko Itakura to suspension.

The 24-year-old has not yet started a game in Qatar, but he said Saturday he is 100 percent recovered from the hamstring injury he suffered earlier in the tournament and primed to carry Japan forward.

"I am happy that we are through the group stage but our objective is to play the quarterfinals, so there is one more to go from here. We will do what we have to do on the pitch," he said after training in Doha. 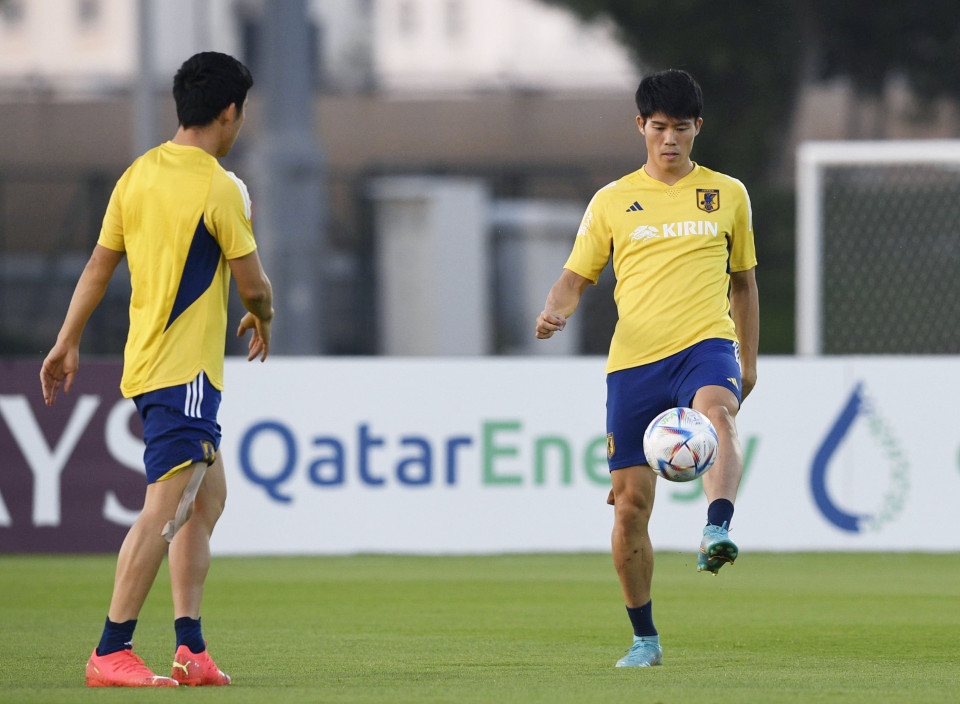 Takehiro Tomiyasu (R) trains with the Japan squad in Doha on Dec. 3, 2022, ahead of the team's game against Croatia in the Round of 16 at the World Cup finals in Qatar. (Kyodo)

After moving from Bologna in Serie A to Premier League side Arsenal midway through 2021, Tomiyasu has become an important part of the north London team's defense, regularly starting as they got off to a flying start to the current season.

He made 17 appearances domestically and in Europe for the Gunners this season before heading to Qatar, putting him up close with many of the world's most dangerous players.

He will need to draw on all that experience if he takes a place in the Japanese defense against a star-laden and veteran Croatia Monday at Al Janoub Stadium in Al Wakrah. 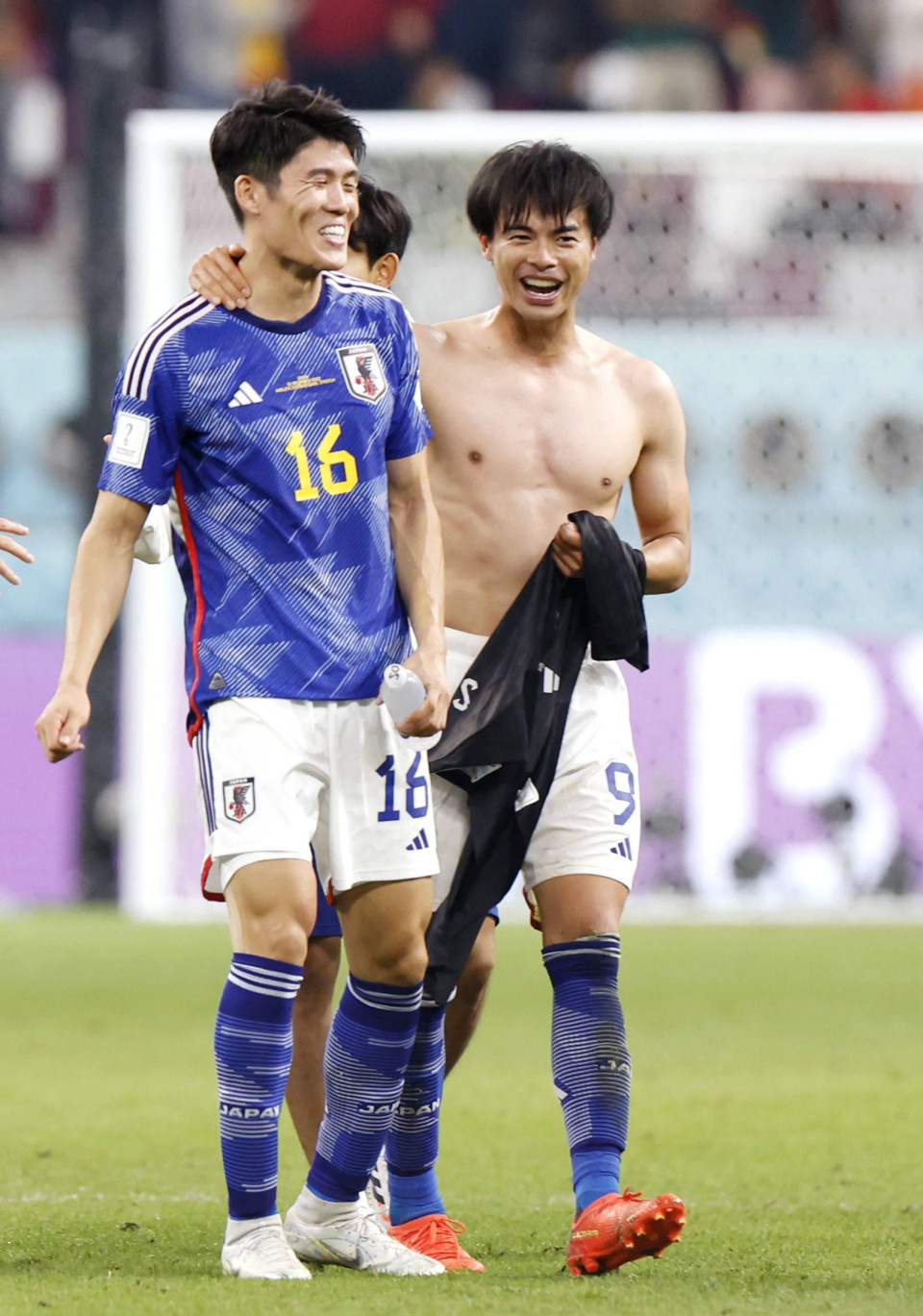 Japan's Takehiro Tomiyasu (L) and Kaoru Mitoma are all smiles after the Samurai Blue beat Spain 2-1 in Doha on Dec. 1, 2022 to advance to the Round of 16 at the World Cup finals in Qatar. (Kyodo)

"They have got a lot of quality in the middle, especially the three midfielders, so yeah of course it won't be an easy game," Tomiyasu said.

"We have got enough quality to beat them, and the most important thing is believing in ourselves. So, we will prepare well and we will do it on the pitch."

After entering the World Cup under an injury cloud having picked up a knock in a Europa League game against FC Zurich on Nov. 3, Tomiyasu has not been called upon to start by Japan manager Hajime Moriyasu.

In the 2-1 win over Germany, he was brought on in Moriyasu's game-changing halftime tactical shift.

The hamstring injury kept him from playing at all in the 1-0 loss to Costa Rica and against Spain he played just 21 minutes off the bench to help Japan cling onto the 2-1 lead that earned them a shot at a quarterfinal berth. 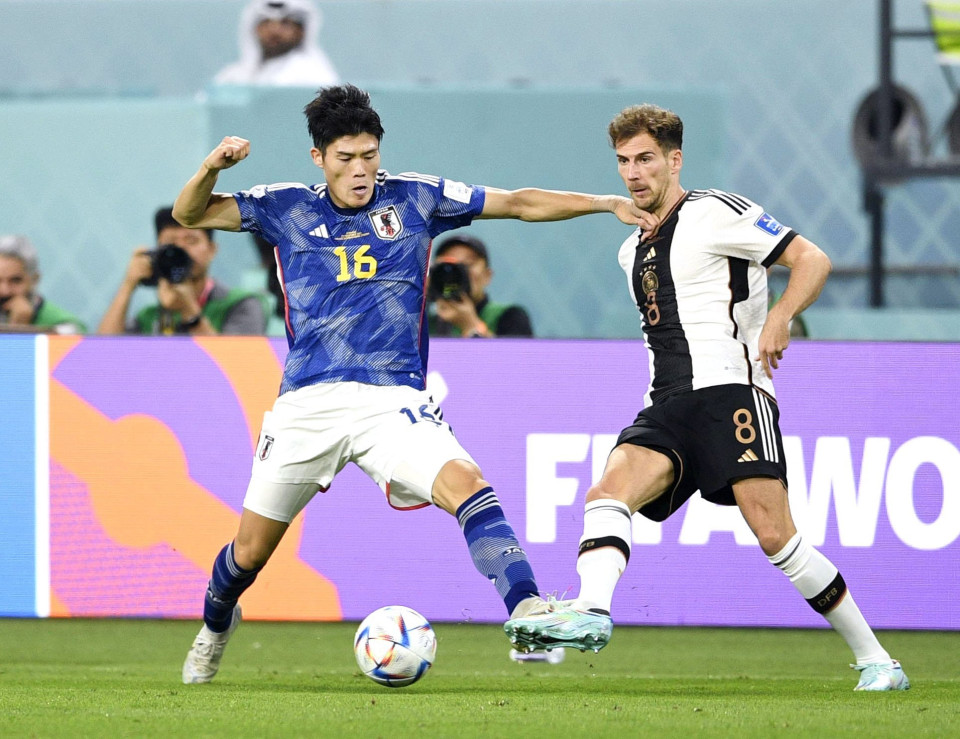 Japan's Takehiro Tomiyasu (L) vies for the ball with Germany's Leon Goretzka in the second half of a World Cup Group E match at Khalifa International Stadium in Doha, Qatar, on Nov. 23, 2022. (Kyodo) ==Kyodo

With Itakura having picked up yellow cards against both Costa Rica and Spain, Moriyasu has to plug a hole at center back, with uncertainty also over the fitness of right back Hiroki Sakai also a concern.

Sakai joined his teammates for training on Saturday, perhaps giving the manager the option to pair the Urawa Red Diamonds player with Tomiyasu on the right side of defense. An ill Takefusa Kubo was the only player to miss training.

Despite being frustrated at not being able to do his part, Itakura said he has faith in his team to keep Japan's tournament alive.

"I believe that everyone in the team will do their best, so I will support them and cheer them on," he said.