China has signaled its readiness to ease its radical "zero-COVID" policy following recent, rare nationwide protests against lockdowns and other strict anti-virus measures, with authorities highlighting weak virulence of the Omicron variant and calling for optimized measures.

Chinese Vice Premier Sun Chunlan, who is in charge of anti-virus measures, said Thursday the pathogenicity of the Omicron virus is weakening and that conditions have been created "for tweaking the epidemic response measures," according to the official Xinhua News Agency.

Sun's remarks at the National Health Commission followed the outpouring of public anger across China at the stringent COVID restrictions over the last weekend, with some demonstrators openly denouncing the ruling Communist Party led by President Xi Jinping. 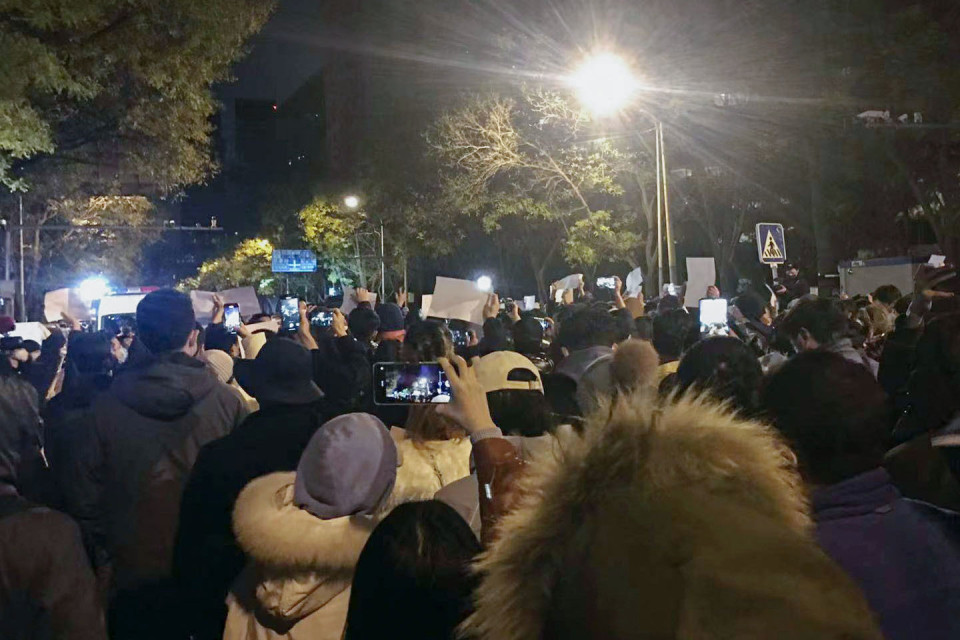 People hold up blank sheets of paper at a protest against the government's "zero-COVID" policy in Beijing on Nov. 27, 2022. (Kyodo) ==Kyodo

As of Thursday, China had logged daily COVID-19 cases of about 33,000 in the mainland, according to the commission. The figure has slightly declined from a record high of nearly 39,000 logged on Sunday, but still remains at a high level.

Following the protests, some restrictions in southern China's Guangzhou have been eased with restaurants, cinemas and leisure centers reopened, according to Xinhua.

Beijing, where many residential complexes have been locked down due to outbreaks, has allowed virus-hit supermarkets to reopen following a one-day closure and exempted home-bound residents including seniors and those working or studying from home from mass COVID screenings, the news agency said.

In China, people are required to take COVID tests frequently to get access to public places. Those in locked-down areas are banned from leaving their homes and often find it difficult to procure adequate food and everyday items.

The U.S. Embassy in Beijing has encouraged American citizens in China to keep a 14-day supply of medications, bottled water, and food, while the Japanese Embassy has similarly advised its nationals in the country to prepare a 10-day stock of such items.

Meanwhile, Chinese authorities are believed to have been wary about the possibility that mourners congregating for former President Jiang Zemin, who died on Wednesday at age 96, could develop into anti-government demonstrations, with calls posted on social media for gatherings in memory of the former leader.

Jiang's body was flown from Shanghai, where he died, to Beijing on Thursday, with a memorial ceremony for him set to be held in the capital's Great Hall of the People next Tuesday.

The 1989 Tiananmen Square pro-democracy protests were triggered by the death of Hu Yaobang, who was sacked as general secretary of the Communist Party two years earlier for his liberal leanings.

Students who gathered to mourn Hu's death called for democracy and government action on rampant corruption.