China and Japan must avoid falling into a "zero-sum game trap" and instead become cooperative partners, Chinese Foreign Minister Wang Yi said Wednesday amid rising economic and security tensions between the United States and China.

In a video message to a forum attended by experts on the Asian countries, Wang also apparently urged Japan, a close U.S. security ally, not to lend a hand to Washington's perceived attempt to decouple China from the global economy. 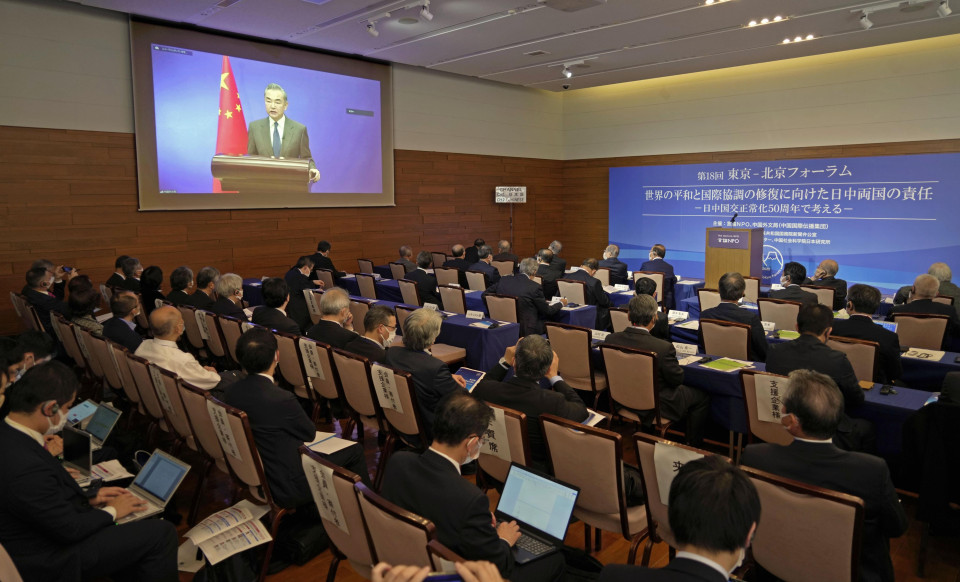 Chinese Foreign Minister Wang Yi (on screen) delivers a video message to a forum on Sino-Japanese relations, as pictured in Tokyo on Dec. 7, 2022. (Kyodo)

Emphasizing that the two nations are "forever neighbors," Beijing and Tokyo should be "vigilant for malicious disturbances" to "Sino-Japanese economic and trade relations," Wang said.

"We should treat each other with consideration and sincerity. We must not get involved in a confrontation between camps, nor caught in a zero-sum game trap," Wang said in the almost-eight-minute message.

For two years through 2021, the annual forum, which had started in 2005, took place online against the backdrop of the COVID-19 pandemic that began in early 2020.