As the Ukraine war drags on, Japan, which will chair the Group of Seven industrialized nations in 2023, should increase efforts to urge more nations to impose sanctions on Russia and add pressure on Moscow to enter negotiations with Ukraine for a cease-fire, international relations experts say.

An effective way to do so is for the G-7, whose leaders are gathering for an annual summit in Hiroshima in May, to form a united front with countries that have so far resisted taking action against Russia.

Russia's invasion of its neighbor in late February has led the G-7 states -- Britain, Canada, France, Germany, Italy, Japan and the United States, plus the European Union -- and some other nations to impose a series of punitive measures on Russia, a major natural resource producer, including an energy embargo and a ban on sales of semiconductors and cutting-edge materials to the country.

With Moscow and Kyiv showing no signs of returning to the negotiating table, measures implemented by the G-7 have "not borne fruit," said Yoko Hirose, an international politics professor at Keio University. 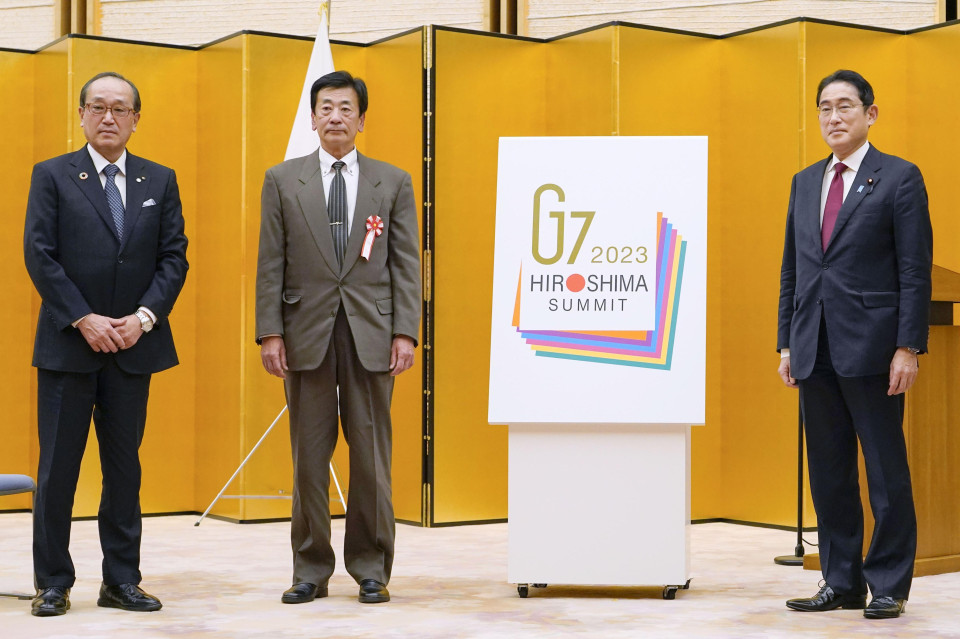 (From R) Japanese Prime Minister Fumio Kishida, designer Keiichi Kusano and Hiroshima mayor Kazumi Matsui stand with the logo for a summit of the Group of Seven industrialized nations in Hiroshima in May, at the premier's office in Tokyo on Dec. 21, 2022. The logo, created by Kusano, was selected for the summit the same day. (Kyodo) ==Kyodo

Russia has not signaled any intention to retreat from four eastern and southern Ukraine regions that President Vladimir Putin has declared to integrate into his nation, while Ukrainian President Volodymyr Zelenskyy has demanded Russian troops withdraw from all Ukrainian territory, including Crimea, which Moscow annexed in 2014.

Hirose, an expert in the politics of the former Soviet Union, says the "Global South," or developing countries in such areas as Asia, Africa and Latin America, have kept their normal economic relations with Moscow, leaving room for Russian companies to generate revenue from energy and other exports, helping to finance the country's war.

Most developing nations and emerging powers, such as China and India, have not joined the sanctions or openly criticized Moscow over the war, with some even expanding trade with Russia.

To tighten the squeeze on Moscow by drawing developing countries to its side, the G-7 needs to seriously consider making up for losses such countries would suffer if they scale down economic ties with Russia, Hirose said.

"The G-7 nations have to determine how to explain to other nations about the advantages of being in the democratic camp and how to attract them," she added.

One of the sanctions' major side effects is energy price surges, which have begun to cause what Hirose calls "Ukraine fatigue," a condition in which people's attention is increasingly drawn away from Ukraine and back to domestic concerns.

To get them committed to sanctions on Russia and support for Ukraine, Japan and other G-7 nations should "grasp their individual and specific needs and display a determination to stand by them," she said.

Some scholars say the G-7 should also try to find a way to cooperate on the Ukraine issue with China, which has deep economic and military ties with Russia.

"Currently, Russia listens to what China says, so Russia would be isolated if China walked out on Russia" over the Ukraine war, said Mitsuhisa Fukutomi, a professor at Hitotsubashi University's Graduate School of Social Sciences, well versed in international politics.

The G-7 nations have often aired concerns over Beijing's intensifying military pressure on Taiwan and human rights issues in the Xinjiang Uyghur Autonomous Region, Tibet and Hong Kong, "but they are not necessarily hostile," said Fukutomi, calling on the government of Japanese Prime Minister Fumio Kishida to exercise leadership in approaching Beijing to keep Putin from resorting to dangerous acts.

Fumihiko Yoshida, director of the Research Center for Nuclear Weapons Abolition at Nagasaki University, said Japan and other G-7 members should attempt diplomacy aimed at convincing China that there will be no benefits in siding with Moscow.

Beijing has sought to somewhat distance itself from Moscow after more human tragedies unfolded in Ukraine and Russian troops faced setbacks on the battlefield.

"It should not be a game between the camps" of democracies and autocracies, he said.