Despite an unprecedented show of civil disobedience in mainland China over its stringent "zero-COVID" measures, people in Hong Kong have so far demonstrated a notable lack of sympathy and support toward the situation across the border.

Over the past week, Hong Kong has seen a series of small-scale solidarity protests at local universities and on the streets, with individuals lighting candles and holding white placards in support of the demonstrations across China.

But despite this apparent show of solidarity, there was little participation from local Hong Kong citizens, as exchange students and immigrants from the mainland mainly attended the protests.

Part of this indifference could stem from a fear of legal repercussions under the national security law, sweeping legislation imposed by Beijing amid its crackdown on dissent in the city in 2020 following the sometimes violent anti-government protests of the previous year that saw thousands take to the streets.

The law, which criminalizes acts of secession, subversion, terrorism and collusion with foreign forces, has sparked concerns about freedom of expression -- a fundamental right protected within the city's Basic Law -- as hundreds of demonstrators continue to be arrested and jailed for their involvement in the 2019 protests. 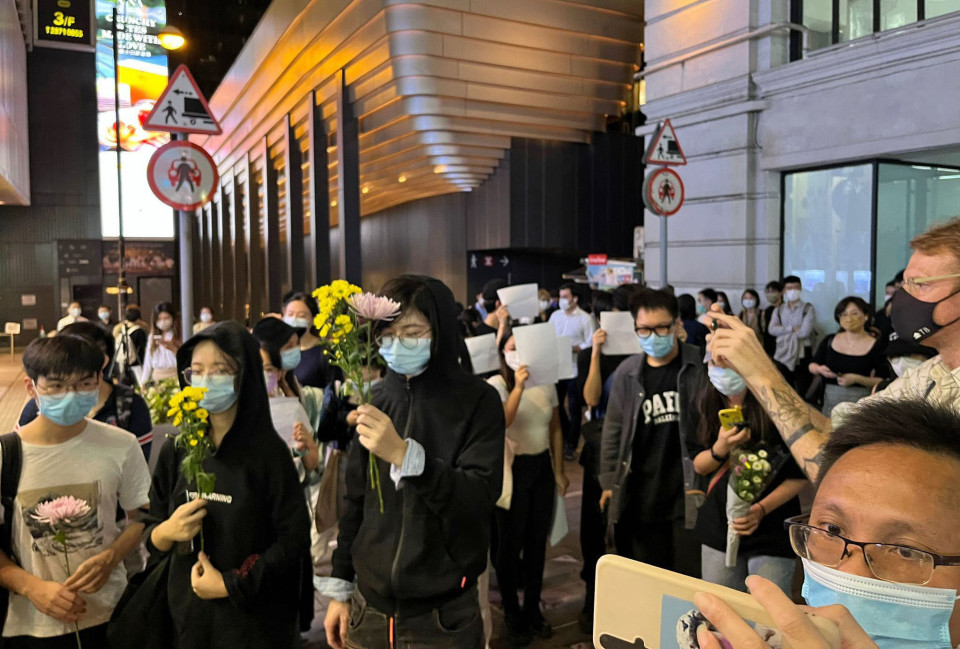 On Thursday, a Hong Kong man who had sustained a gunshot wound after being shot by police at close range during the 2019 unrest was sentenced to six years behind bars.

The legal repercussions are further exacerbated by the city's current social distancing measures, prohibiting public gatherings of more than 12 people.

Hong Kong has already seen the use of these measures to block major events in the past. In 2020, police arrested 24 pro-democracy figures on suspicion of illegal assembly after an annual vigil for the Tiananmen Square protests was banned due to public health concerns.

But also perhaps at the center of Hong Kong's lack of sympathy toward their mainland Chinese counterparts is Beijing's "one country, two systems" principle, which sought to integrate the former British colony into sovereign China while promising to preserve an array of political freedoms even after the city's handover in 1997.

In recent years, though, China has increasingly moved to undermine Hong Kong's autonomy and democracy, including the arrests of activists, lawmakers and journalists, crackdowns on pro-democracy organizations and curbed freedoms.

In 2021, Hong Kong saw a string of Beijing-imposed electoral reforms to ensure that only "patriots" govern the city, with only one opposition-leaning figure elected to the city's Legislative Council last December.

A graduate student at the University of Hong Kong, who wished to remain anonymous, told Kyodo News that people in Hong Kong and mainland China have different goals in mind, making it difficult for their aspirations to be aligned with each other.

She said the cause is still worthy of support and that she may join future protests, though she is skeptical of the movement's longevity.

"They are inherently afraid to talk about politics...As soon as China relaxes its measures, I think the event will end."

Nathan Law, a Hong Kong activist, currently exiled in London, said on Twitter that while it was important for mainland Chinese protestors to stand united in their cause, there was a deeper need for ideological transformation in order to effect real change.

"A mass movement cannot exist before a change in consciousness," he wrote. "I think the more profound question is...how to recognize that the right to decide the future of the country should be in your own hands."