After a World Cup of highs and lows for Japan, manager Hajime Moriyasu said Wednesday he has been instructing his players to make sure they turn every experience into a positive that will benefit the team as a whole.

With a win against Spain on Thursday the only result that guarantees Japan will get another chance to play at the tournament in Qatar, the team's 54-year-old manager revealed another mantra he hopes will deliver that outcome.

"No matter, whether it was a good thing in the past or a bad thing, you should try to change that to a positive in the future," he said.

Japan goalkeeper Shuichi Gonda said Moriyasu has "saved me many times" with his repetition of that message. 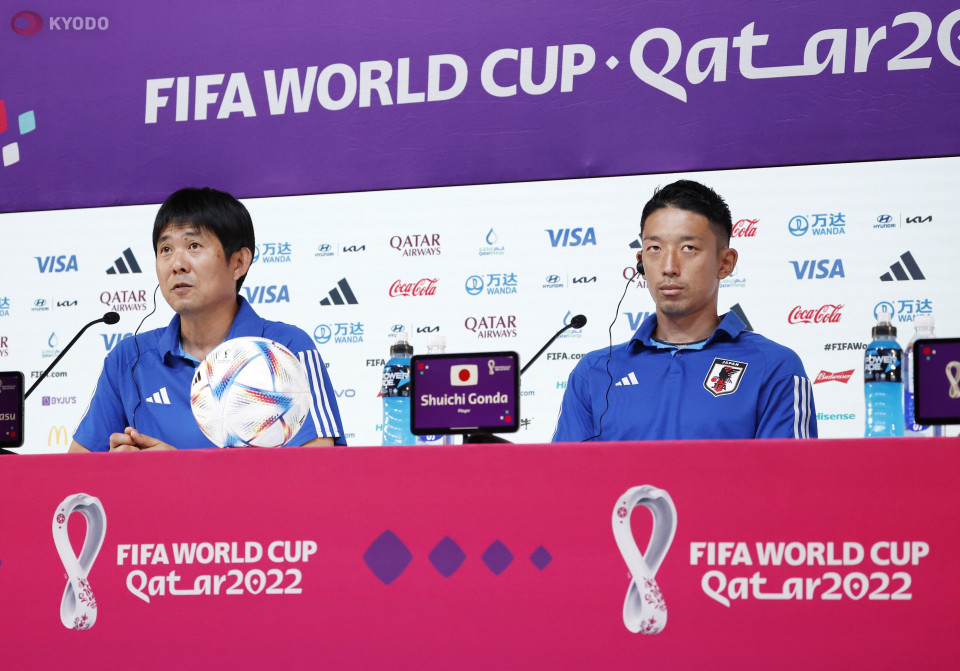 Japan manager Hajime Moriyasu (L) and goalkeeper Shuichi Gonda attend a press conference near Doha on Nov. 30, 2022, a day before their last group-stage match of the World Cup football finals against Spain. (Kyodo)

"We need to believe in ourselves," the Shimizu S-Pulse player said. "I believe this is the most important thing."

"We are just at a single point in time in the long history of Japan that is built off the back of great players, so we cannot just be disappointed because we failed once," he said.

Moriyasu has had a tumultuous World Cup. After receiving plaudits for Japan's giant-slaying 2-1 win over Germany in the teams' tournament opener, the critics found their voice to critique his approach in the team's disastrous one-goal loss to Costa Rica. 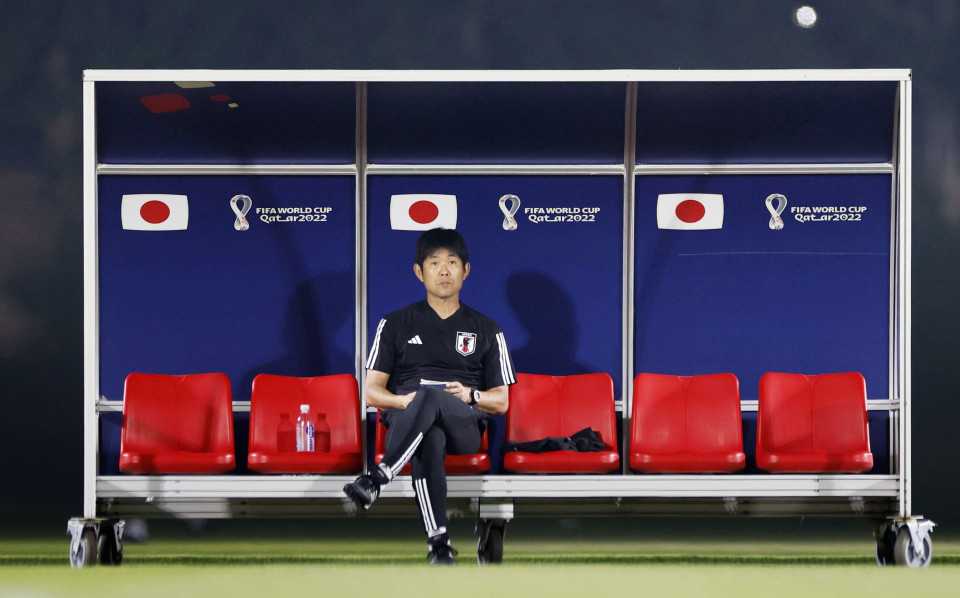 Japan manager Hajime Moriyasu is pictured ahead of a training session in Doha on Nov. 30, 2022, a day before the team's final group-stage match at the World Cup finals against Spain. (Kyodo)

The former Japan national team midfielder and Sanfrecce Hiroshima player and manager was forced to defend his players after that performance, calling for shots to be aimed at him alone.

Despite that, at the pre-match press conference at the Main Media Center in Doha, Moriyasu said he has blocked out the noise.

Moriyasu announced some good news for Japan fans by confirming Arsenal's Takehiro Tomiyasu and Stuttgart's Wataru Endo are both available for selection after recovering from respective hamstring and knee issues. Defender Hiroki Sakai has not done the same from his hamstring injury, however.

Japan have three points in Group E and can advance to the round of 16 with a win against Spain. A draw will also be good enough if Germany and Costa Rica have the same result, though if the Central Americans win, Japan must do the same. If Germany win and Japan draw, goal difference will come into the equation. 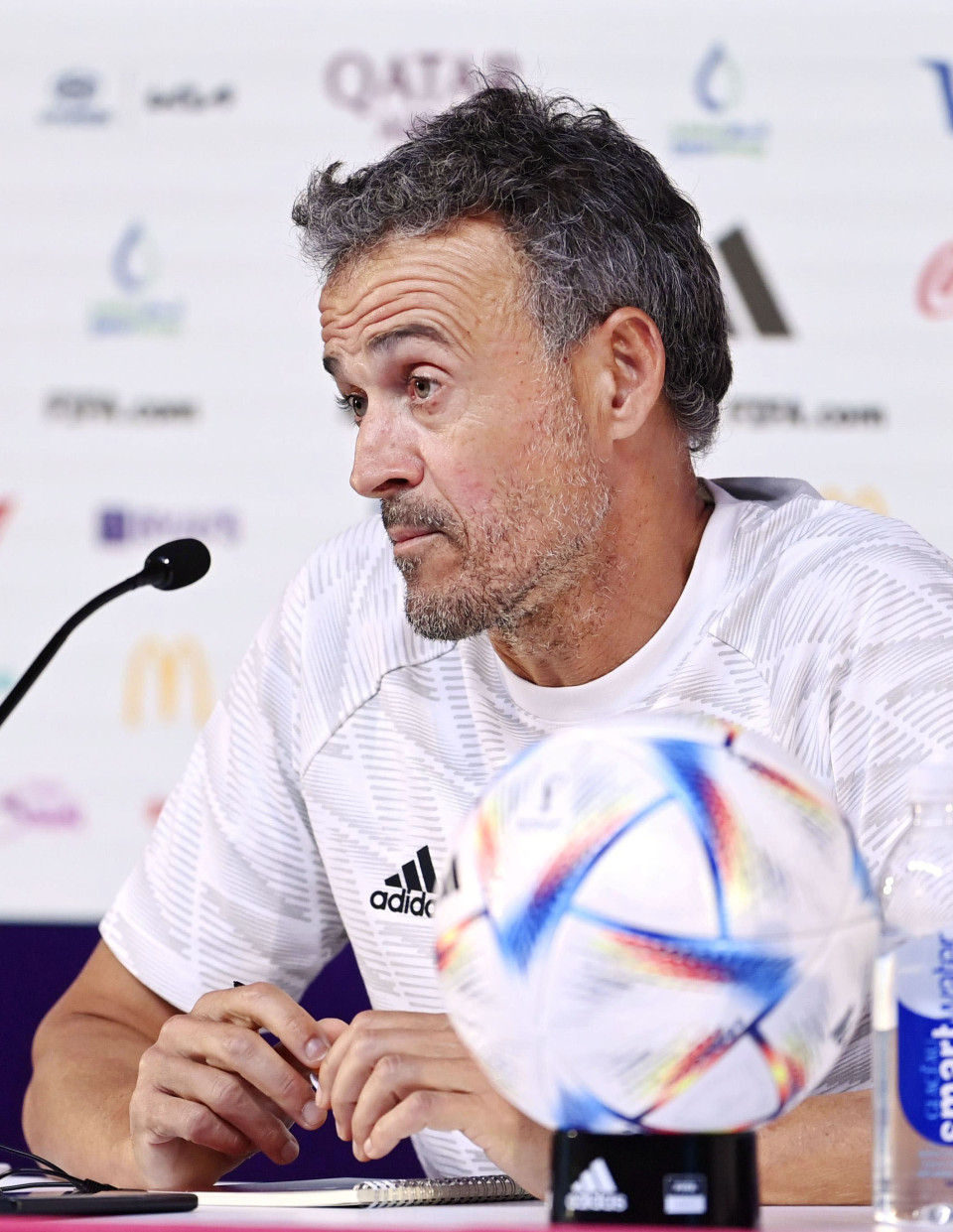 Spain manager Luis Enrique speaks at a press conference near Doha on Nov. 30, 2022, a day before the team's World Cup group-stage match against Japan. (Getty/Kyodo)

With Spain just needing a win or a draw to move on, their manager Luis Enrique was asked whether he has considered targeting a point against Japan in hopes of finishing second in the group and securing more favorable matchups later in the tournament.

The former Barcelona manager was clear in his response.

"We cannot start with these types of estimations," he said. "We are faithful, we try to put up a fight against any opponent."

"To win a World Cup you have to win against everyone who comes your way, that is our goal," the 52-year-old said.

Spain have only lost two of their last 15 World Cup games and only failed to score in one game over the same period. With that record, Enrique is rightly confident, though he called the game at Khalifa International Stadium an "acid test" for Spain.

"They are so dynamic, so quick, they put you under so much pressure they don't give you any time at all," he said of the Samurai Blue.

"We won't have time to enforce our style at all."