FEATURE: Femtech taking off in Japan, but much room for further growth

Since "femtech" became a buzzword in Japan several years ago, products and services developed to address women's health have been introduced one after another -- a phenomenon previously unthinkable in a society that once stigmatized such issues.

Period panties, where the volume of menstrual blood flow can be tracked by an app daily, subscription services for birth control pills that can be home-delivered or disposable menstrual cups are some cutting-edge femtech products drawing attention to make lives more comfortable for women.

But the budding industry of femtech, a portmanteau derived from the words "female" and "technology," has room for more growth if consumers, businesses and the government work together to provide solutions to the myriad health and medical issues unique to women, analysts say.

While the United States, Britain and European countries were about a decade ahead in introducing femtech services, "Japan is unique in that the industry is expanding with the involvement of the government," said Hiroko Nakamura, who in 2019 co-founded Fermata Inc., a company providing consulting and an online shopping platform related to femtech goods and services.

But while welcoming the support provided by the government, which it says is to encourage women's empowerment in the workplace, Nakamura, 38, believes there is more that can be done. 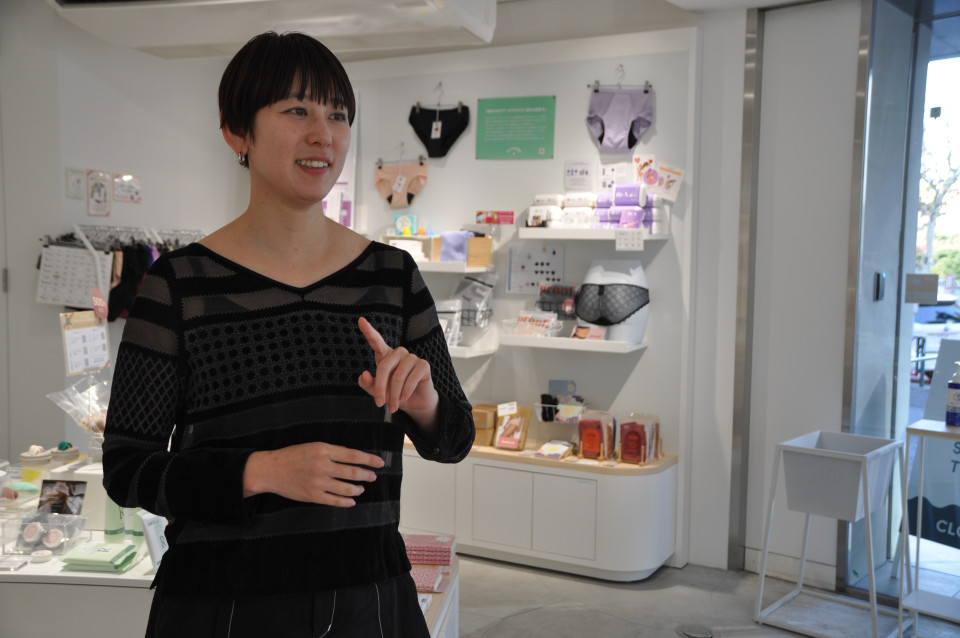 Hiroko Nakamura, chief communication officer and co-founder of Fermata Inc., a provider of services and items related to femtech, speaks during an interview with Kyodo News at its store in Tokyo on Dec. 9, 2022. (Kyodo)

"We hope the government will design new frameworks to open the door to femtech products, which sometimes cannot enter the market as they belong to a completely new category from existing items," she said.

For instance, it took time for the government to allow menstruation panties made with absorbent materials to be advertised as a product for periods although the underlying technology had already been verified. They were finally recognized under a regulation of the pharmaceutical affairs law in 2021.

Nakamura said that to promote the healthy growth of the femtech market, products and services should be made freely available once they are scientifically proven to be safe and effective.

"I am not calling on the government to ease regulations. It needs to continue providing consumer protection through its rigorous pharmaceutical affairs law. But balance is important," she said.

Partly due to lobbying by a parliamentary group led by veteran ruling Liberal Democratic Party member Seiko Noda, the government has added the promotion of femtech to its annual economic policy blueprint, which since 2021 has provided a guide for compiling the state budget.

"The LDP appears to be a conservative, male-centered party, but male members in their 30s and 40s initiated the parliamentary group to promote femtech. They said they want to make life easier for their partners or daughters," Noda told an exhibition event in Tokyo in late October that brought together around 200 femtech exhibitors, attracting over 14,000 visitors in three days.

"I think working for the femtech industry is thrilling because it is a new frontier, and there are no existing players and regulations that hinder its development," Noda, 62, said. 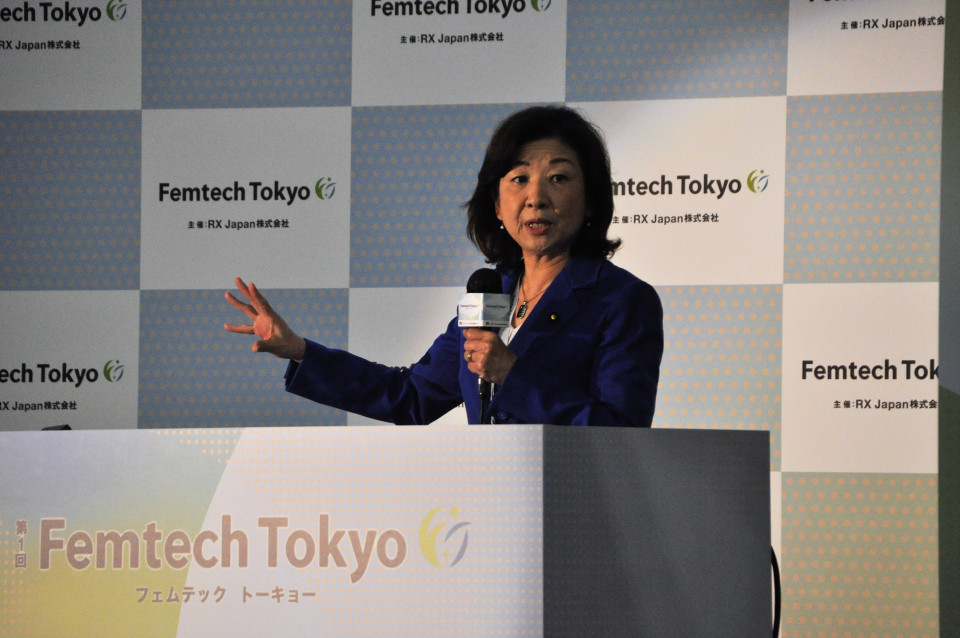 She hopes the development of the femtech industry will help women to "discover and resolve issues associated with their bodies at an early stage in life," recalling that she herself lost the opportunity to give birth in her prime as she pursued a career as a lawmaker.

After undergoing fertility treatment for around a decade, she bore a child at 50 through artificial insemination using donated eggs. "I don't want young women to be regretful about not knowing their bodies," she said.

Since fiscal 2021, the Ministry of Economy, Trade and Industry has launched subsidy programs for entities associated with developing femtech goods and services, earmarking a budget of around 150 million yen ($1 million) to 160 million yen each year.

The program has so far decided to provide financial support of up to 5 million yen each to 39 projects. Participants say the ministry's recognition is essential to promote their health and medical-related products and services.

The government's push for femtech is also about empowering women in society, which it hopes will also invigorate the Japanese economy by encouraging women to work longer.

Ministry data released in 2019 estimated that the annual economic burden on the Japanese female population due to the severity of menstrual symptoms and subsequent needs to visit hospitals and purchase medicines reached 682.8 billion yen that year, mainly driven by a productivity loss of 491.1 billion yen.

2018 data showed that the ratio of women quitting jobs because of difficulties continuing work while undergoing fertility treatment was 22.7 percent.

Femtech not only covers fertility and menstruation issues but an ever-expanding range of women's health concerns, including pregnancy, postpartum care, and menopause, as well as problems that may occur irrespective of age, such as sexual wellness, gynecological disorders like breast cancer, endometrial cancer and cervical cancer. 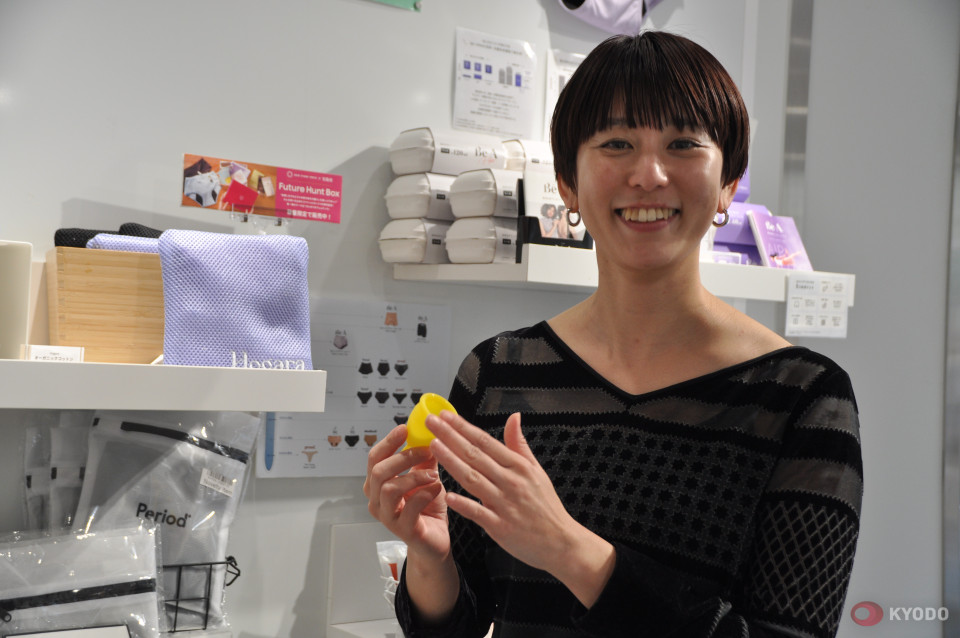 Hiroko Nakamura, chief communication officer and co-founder of Fermata Inc., a provider of services and items related to femtech, speaks during an interview with Kyodo News at its store in Tokyo on Dec. 9, 2022. (Kyodo)

The ministry estimates the annual economic impact of using femtech products and services will reach around 2 trillion yen in 2025, based on the assumption that such technology will encourage women to continue working and earn salaries.

With female-targeted health and medical goods and services flourishing, the femtech domestic market was valued at some 64.30 billion yen in 2021, up from around 59.71 billion yen in 2020, and is set to grow to roughly 70.11 billion yen, according to Yano Research Institute.

Fermata's Nakamura says, "You may think there are now a lot of femtech services and items, but I only see it as the tip of the iceberg. It is important that health issues unique to women that are still unspoken be put into words so that the government and businesses can provide solutions."